In Verkhnyaya Pyshma Victory Day has set a 55-metre Billboard 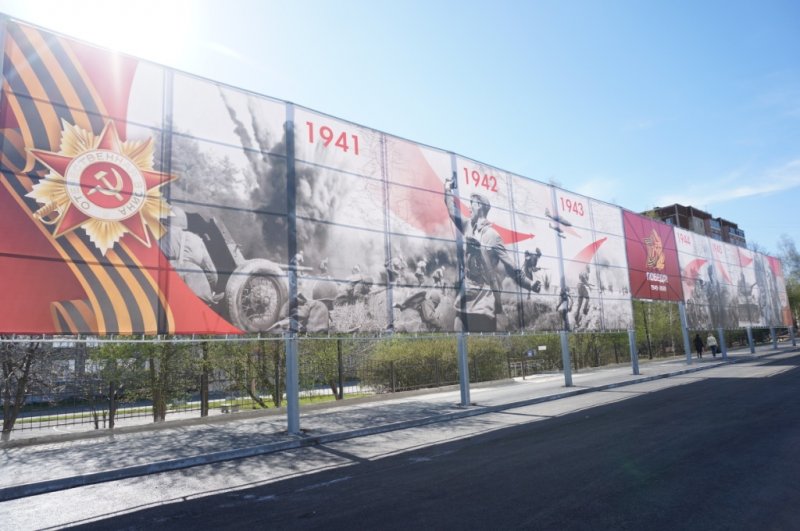 In the center of the Copper capital of the Urals on the assumption the prospect has mounted a huge Billboard height from the ground is 8 meters, length 55 meters. Construction is the largest outdoor design in Verkhnyaya Pyshma.

As reported in the organising Committee for the 75th anniversary of the Victory in the great Patriotic war, developed a unified concept for decorating the city. 55-meter Billboard is the center of the composition. On the banner in a chronological order depicts key events of world war II in chronological order from the battle of Moscow to the capture Berlin. 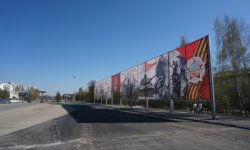 the Binding element of festive decoration has become a St. George ribbon. In addition to the billboards she adorns the facades of the Palace of culture "metallurg", the Ice arena with them. Alexander Kozitsyn, the Technical University of UMMC, the Central entrance of JSC "Uralelectromed".

Also on the Avenue of the assumption and St. Krivousova updated the lightbox. Just installed 70 lighting designs with the anniversary logo.
Note that all public events, including the procession of military equipment, which is traditionally held in Verkhnyaya Pyshma, on 9 may, this year postponed to a later date, that did not prevent to decorate the city for the holiday.

in addition, to create a festive atmosphere on may 9 in the morning in Verkhnyaya Pyshma will sound legendary songs of the war years. It is also planned to run on city streets the car "Studebaker" from the Museum's collection of military equipment to the UMMC. The car will be equipped with sound-amplifying equipment for the broadcast of musical works. During the day she would get to see almost the entire city, the inhabitants were able not only to listen but also to sing together with his family touched to tears by songs of war.
around 11-12 hours the convoy will be prepared by the Central military district. On 11 platforms on display will be the scene of historical reenactment of the defense of the Brest fortress, defense of Leningrad, the battle of Stalingrad, the liberation of Europe etc. it is Known that the festive column will pass along the route: St. Krivousova – street jubilee – St. assumption.

Most spectacular part of the celebration will be a parade of aircraft. At 11:30 in the sky over the Top Pyshma will pass 22 units of aircraft. The parade will open the world's largest serial transport helicopter MI-26, followed by 40 seconds fly a flight of 4 attack helicopters MI-24 ("crocodile"), then a 40-second interval in sequence - the Quartet of MI-8 helicopters, the aircraft L-410, military transport aircraft an-26 and an-12 reconnaissance aircraft SU-24MR, link fighter-bombers SU-34, closes the group link fighter-interceptor MIG-31.

At the same time residents of the city are advised not to go outside and see the flight of the aircraft and the convoy from their Windows or from the balconies of houses.

On this topic
Olympic champion Angelica Timanina presented awards to young synchronized swimmers in Verkhnyaya
Verkhnyaya Pyshma met Metallurgist Day with a colorful carnival
The eternal flame from the factory furnace, Victory Waltz, Procession of military equipment and a
May 9 in Verkhnyaya Pyshma: Eternal flame from the factory oven, Victory Waltz, Procession of
Frontline veterans and home front workers are honored at BMK
JSC "Uralelectromed" produced the 4 millionth ton of copper wire rod
Partner news
Сomments
Добавить комментарий
Комментарии (0)
News Analytics
Azerbaijan's SOCAR plans to invest in the extraction of battery metals in26-07-2021, 22:00
The first domestic industrial energy storage system was developed and launched26-07-2021, 22:11
The profitability of purchases of scrap metal in Ukraine has decreased, but is26-07-2021, 17:27
Metinvest is ready to pay more than 9 billion hryvnia for the Dnieper steel26-07-2021, 13:01
Cherkassk Azot by Dmitry Firtash completed the modernization of the ammonia26-07-2021, 13:45
On the regional markets of metallurgical products, prices are balancing in a22-07-2021, 16:22
Demand for armaments will ensure a stable growth of armored steel sales by 4%20-07-2021, 10:10
Protectionist Measures Support European Steel Prices Despite Summer Lull19-07-2021, 11:02
Positive price growth is observed in the markets for metallurgical products16-07-2021, 14:12
European steel market is in confusion: price growth has slowed down, but no one21-06-2021, 17:40