Battle of 100-year-old cars was held in Yekaterinburg 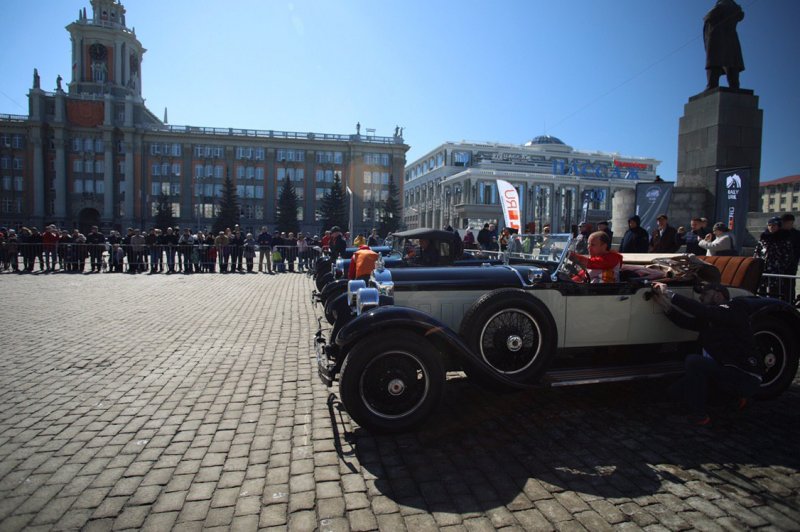 Today, cars produced in the 20s of the last century competed on the 1905 Square. The battle of retro cars has become one of the events of the In Motion festival, which is held in Yekaterinburg on the eve of the Urals Cup retro rally. The city will host these large-scale races in the middle of summer for the first time.

Cars from the collection of the UMMC Automotive Museum, which once drove along the pavements of Paris and Detroit, drove onto the pavement of the main city square. At the start of the race, the engines of the "workhorse" Ford Model A, as well as the luxurious "Packard 443" and "Delage DMN" roared. The name of the latter brand is translated from French as "elegance", but the American "Packard" is in no way inferior to its counterpart in design. Vintage cars captivated the audience with their beauty and made them excited during the competition in agility and speed. Driving such cars, as the public has seen, is not easy, and those maneuvers that seem elementary for modern cars are quite difficult for retro cars.

- It is rather difficult for a modern driver to drive such a car: a significant turning radius, the body has an unusual shape, the seat is located low, and the mirrors and windshields are very small, give a small overview, - explained Stanislav Churkin, director of the UMMC Automotive Museum.

French auto expert Francois Melsion, who first arrived in the Urals to get acquainted with the local a retro-community. He has acted as a judge at international competitions such as the Louis Vuitto Classic in Paris and the Pebble Beach Cocours d'Elegace in California.

— I'm glad to be in the Urals and find here such an enthusiastic retro community, - noted François Melsion. - Efforts to preserve old cars, which are being made here, cause me great respect and admiration. I am also convinced that a car, no matter how old it is, with a careful attitude can serve as a means of transportation, which we have been shown today.

According to the results of the competition, Ford Model A was recognized as the most maneuverable, the fastest was Packard, and Delage went to the Audience Choice Award for Stylish Appearance.

After the demonstration race, the townspeople also took a ride on retro cars and felt what it was like to be a passenger in a car from the beginning of the last century. Now the rarities that participated in the battle will go to the exhibition grounds. "Packard" will be housed in the exhibition pavilion of the UMMC Automotive Museum on Plotinka and will stay there for about a month, and "Delage" will be exhibited at the Glavny Prospekt art center until mid-summer.

The UMMC Automotive Museum is the initiator and one of the organizers of the On the Move festival, as well as the Ural Cup retro rally (stage of the RAF Retro Rally Cup). On July 13 and 14, the best Russian racers and crews from abroad will take part in the Ural competitions, starting from the Museum in Verkhnyaya Pyshma and finishing in the center of Yekaterinburg.

The UMMC Automotive Museum is the largest collection of vintage cars, motorcycles and bicycles in Russia. The 130-year history of the automotive industry is presented in a 4-storey building on an area of ​​12 thousand square meters 2 . The unique collection contains about 400 exhibits. Over a hundred thousand people visited the Verkhnaya Pyshma car museums last year alone.

Ford Model A is the second conveyor (mass) model of a passenger car of the American company Ford Motor Compay. The model was produced until 1931. The price ranged from 385 to 1500 dollars depending on the type of body, the layouts of which there were more than 20. The main advantages of the car were simplicity, reliability, durability and relative cheapness. The car was delivered to Western European markets - England, France, Germany, but it did not have much success due to high power taxes. This model has left a colossal mark in the history of the domestic auto industry: under license Ford A began to be assembled in the USSR back in 1929 under the name GAZ-A.

The French company Delage, founded by Louis Delage in 1905, specialized in the production of exclusive and sports cars. Exceptionally expensive and prestigious cars were produced under this brand, which looked exactly the same. The company's cars have participated and won various races, including Le Mans, Indianapolis. The Delage DMN model is recognized

On this topic
The annual quest-rally "Day of the Muscovite" started for the first time from the Museum of
BMZ will hold a youth tourist festival
The first children's retro rally was held in Yekaterinburg
The most elegant French car was displayed in the pavilion on Plotinka
A hundred-year-old car of French industrialists arrived in Yekaterinburg
An exact replica of the world's first car was parked on the Plotinka
Partner news
Сomments
Добавить комментарий
Комментарии (0)
News Analytics
Ukroboronprom confirmed the intentions of Antonov State Enterprise to start25-07-2021, 11:15
Gazprom reacted to the refusal of Naftogaz of Ukraine to buy Russian gas with25-07-2021, 11:00
Iron ore has become a strategically important raw material for defense -24-07-2021, 11:06
Vietnam overtook Ukraine in the world ranking of steel-producing states24-07-2021, 11:38
Port "Yuzhny" has set a record for the speed of loading pig iron on a ship24-07-2021, 10:10
On the regional markets of metallurgical products, prices are balancing in a22-07-2021, 16:22
Demand for armaments will ensure a stable growth of armored steel sales by 4%20-07-2021, 10:10
Protectionist Measures Support European Steel Prices Despite Summer Lull19-07-2021, 11:02
Positive price growth is observed in the markets for metallurgical products16-07-2021, 14:12
European steel market is in confusion: price growth has slowed down, but no one21-06-2021, 17:40