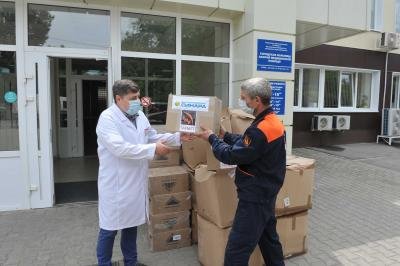 The meeting discussed issues of vaccination against influenza, measures to reduce industrial injuries, cooperation and city and regional administrations. Sergey Bilan spoke about the activities of TAGMET aimed at solving the problems facing the city. The plant's initiatives cover various areas, including ecology, landscaping, restoration of the sturgeon population in the Azov Sea basin and the coastal zone, charitable and educational projects, assistance to medical and social institutions.

In particular, within the framework of the Stop- coronavirus! " the plant donated equipment and personal protective equipment to medical institutions in the amount of more than 30 million rubles. Through the efforts of the enterprise, the laboratory is being repaired at the city emergency hospital (GBSMP), where residents of Taganrog will be tested for coronavirus. The chambers of the cardiology and trauma departments of the GBSMP were repaired. As part of the improvement of urban areas, playgrounds were installed and sidewalks on Zavodskaya, Osipenko, Dzerzhinsky streets were updated.

“Thanks to the successful interaction with the city and regional administrations in Taganrog, there has been a positive dynamic in the development of urban infrastructure, more comfortable conditions are created for residents of our city. All enterprises of Taganrog need to get involved as much as possible in the process of improving urban areas, "Sergei Bilan noted during the meeting.

Похожие материалы
Valentina Matvienko visited TAGMET and got acquainted with the Sinara Group's proposals for the
The Governor of the Rostov region got acquainted with the environmental and social projects of
TAGMET has produced a 5-millionth ton of pipes on the hot-rolling mill
TMK Announces IFRS Results for Q1 2020
The TMK Board of Directors recommends accepting the voluntary offer of the TMK subsidiary in
TMK's Board of Directors approved a program for the acquisition of TMK's common shares by its
Добавить комментарий
Комментарии (0)
News Analytics
KZhRK miners' strike threatens with loss of sales markets without prospects of16-09-2020, 21:51
Privatization of the alcohol industry has started in Ukraine16-09-2020, 14:56
The head of KZHRK ordered preparations for the conservation of all four mines16-09-2020, 13:40
Toyota and Dentsu team up to improve marketing strategy16-09-2020, 10:16
Iron ore prices to surpass six-year high soon16-09-2020, 10:32
Iron ore prices to surpass six-year high soon16-09-2020, 10:32
World Oil Demand Peak May Be Over - BP15-09-2020, 09:05
China expands car market capacity by increasing demand for steel and metals11-09-2020, 10:56
Prices continue to rise in the long and flat steel markets08-09-2020, 14:25
Difference between ferrous and non-ferrous metal28-08-2020, 13:45
Sign in with: