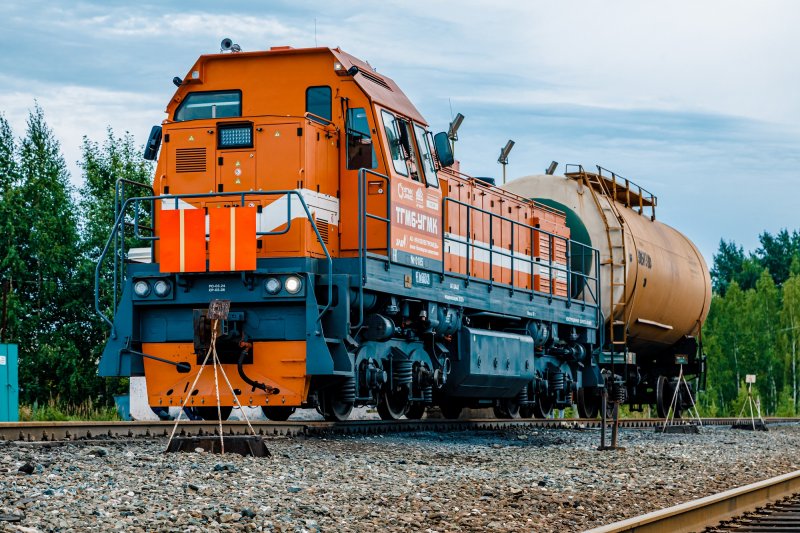 Shunting diesel locomotive TGM-6-UMMC (serial number 185) of the Polymetal Production branch of Uralelektromed JSC (an enterprise of the UMMC metallurgical complex) received the right to enter the main lines of JSC RUSSIAN RAILWAYS". This locomotive will run from the plant's industrial site to the Yezhovaya station, where shunting works with arriving and departing cars will be carried out.

According to Leonid Matveyev, head of the railway department of Uralelectromed JSC, this is a new stage in the operation of the branch's diesel locomotive fleet , which have undergone an in-depth modernization at the "Shadrinsky Automotive Aggregate Plant". By involving modernized diesel locomotives in the transport process, the reliability of production operations is increased.

After the diesel locomotive was registered with the Federal Agency for Railway Transport, an admission certificate was issued giving the right to enter the railways of Russian Railways.

In addition, the locomotive was additionally equipped with safety devices. In particular, an automatic locomotive signaling system has been installed, which ensures traffic safety when performing shunting operations.

The railway workers plan to register another locomotive in 2021, which will make it possible to switch to processing the car fleet with modernized diesel locomotives.

Note that the new diesel locomotive was created taking into account modern environmental and traffic safety requirements. It is equipped with an economical 1200 hp diesel engine. and an auxiliary diesel generator set, modern electronics that control the operation of the units and provide information output to the LCD screen of the control panel monitor, the driver's cab with improved ergonomics, air conditioning, bright LED spotlights and side lights.

Похожие материалы
Polymetal production has improved the railway fleet
A base for routine maintenance of modernized diesel locomotives has been created at SHAAZ
SHAAZ modernize shunting locomotives for the JSC MMC Norilsk Nickel
SHAAZ modernize shunting locomotives for "Norilsk Nickel"
An audit was carried out at SHAAZ as part of the certification of a new diesel locomotive TEM2N-UMMC
Kuzbassrazrezugol will allocate over 1 billion rubles for the development of railway transport
Добавить комментарий
Комментарии (0)
News Analytics
Innovative matrix headlights on the Audi E-Tron19-10-2020, 22:43
Tensions rise between China and Australia over commodity trade14-10-2020, 18:15
The European Union confirms its intention to introduce a border tax on carbon13-10-2020, 13:20
ArcelorMittal Europe to start producing green steel from 202013-10-2020, 12:44
Kremenchug refinery launched an isomerization unit13-10-2020, 12:43
Dolomite powder market to reach USD 33.44 billion by 202705-10-2020, 12:33
Iron ore prices to surpass six-year high soon16-09-2020, 10:32
World Oil Demand Peak May Be Over - BP15-09-2020, 09:05
China expands car market capacity by increasing demand for steel and metals11-09-2020, 10:56
Prices continue to rise in the long and flat steel markets08-09-2020, 14:25
Sign in with: