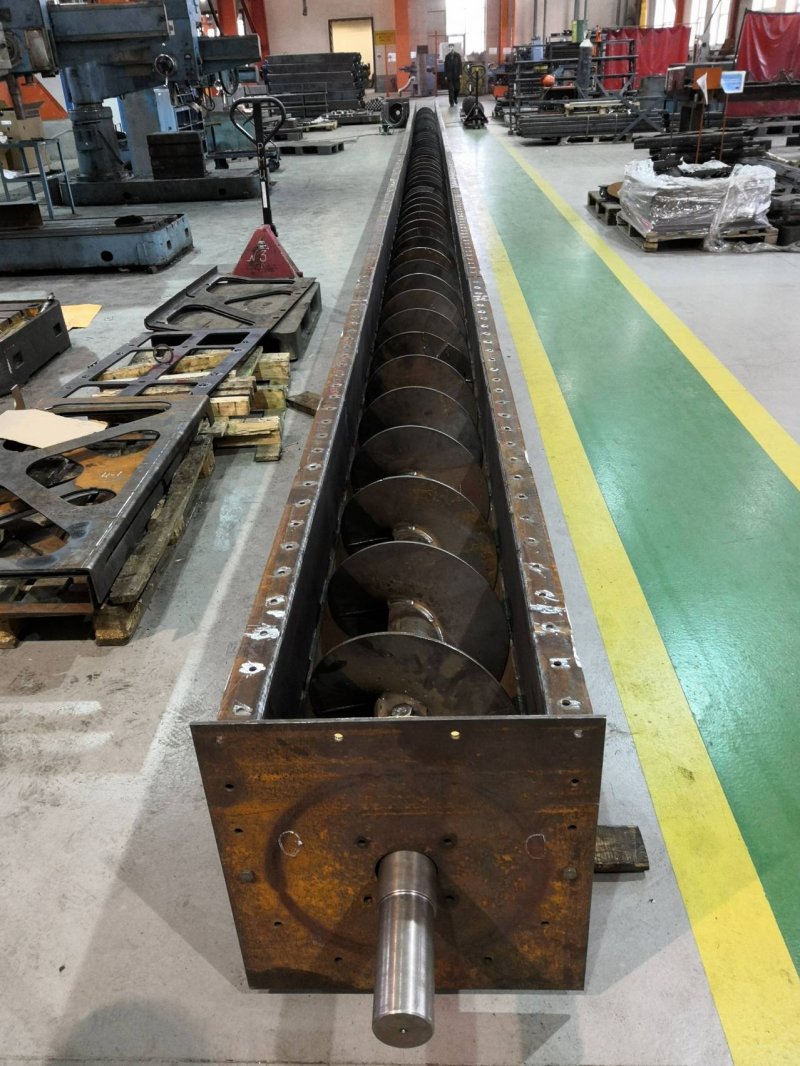 ( Kirovgrad). The mechanism is a long rod with a solid screw surface, translated from German - "snail". Basically, it is a screw conveyor that is usually used to move dry and bulk materials. This equipment will become part of the dust removal system on the PPM furnace.

With a long length (comparable to an eight-story building), the auger has a rather modest width - only 300 mm. The unit was made of steel. Due to its impressive length, it was assembled from several abutting parts. Production began with the cutting of "petals" - future blades from a sheet of metal using a plasma cutting machine. They turned out to be flat. Then they were welded together in a spiral, which was pulled out with a winch. Then the finished spirals were put on the rod.

The final operation is the control assembly of individual parts into one large screw. The assembled product took up almost an entire passage in the workshop. At this stage, the conformity of the product to the drawings, the correctness of assembly and the dimension were evaluated. The auger entered the PPM as a constructor.

Похожие материалы
Polymetals production modernized the boiler room
Production of alloys of non-ferrous metals completes the fabrication of a giant caisson for shaft
The TMK Board of Directors recommends accepting the voluntary offer of the TMK subsidiary in
In the Production of alloys of nonferrous metals has increased the capacity of the refinery
Locomotive tuning: a huge octopus was painted on a diesel locomotive in Kirovgrad
A filter for gas cleaning of a copper smelter was manufactured at the Non-ferrous Metal Alloy
Добавить комментарий
Комментарии (0)
News Analytics
На фоне пандемии COVID-19 в ООН призывают страны обмениваться данными28-10-2020, 09:22
Метинвест оборудует новые кислородные точки в Мариуполе для тяжелобольных28-10-2020, 09:06
Aston Martin: Mercedes получит 20% акций люксового бренда28-10-2020, 09:34
SPLAV presented shut-off valves at PCVExpo27-10-2020, 20:15
Metinvest intends to invest another $ 413 million in environmental projects in27-10-2020, 20:54
Dolomite powder market to reach USD 33.44 billion by 202705-10-2020, 12:33
Iron ore prices to surpass six-year high soon16-09-2020, 10:32
World Oil Demand Peak May Be Over - BP15-09-2020, 09:05
China expands car market capacity by increasing demand for steel and metals11-09-2020, 10:56
Prices continue to rise in the long and flat steel markets08-09-2020, 14:25
Sign in with: