UMMC used drones to create a "digital mine" 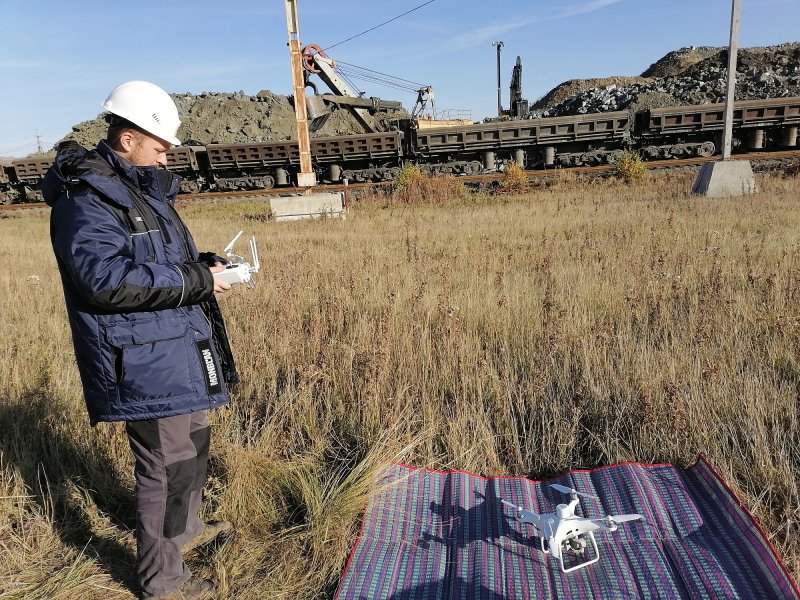 Scientists of the Technical University of UMMC (TU UMMC), together with specialists of the Uchalinsky GOK (an enterprise of the raw materials complex of UMMC), tested and improved the method of conducting mine surveying using unmanned aerial vehicles (UAVs). The new technology makes it possible to facilitate and speed up the daily work of the enterprise, to make it as safe as possible for the personnel.

“This is another step towards the creation of the Digital Mine - an enterprise with a streamlined system of automated operational dispatch control,” explained the head project consultant to the General Director of JSC "UMMC" Gennady Smyslov. - The technology is already being used in construction, in the creation of digital models of settlements and urban development, architectural monuments, and topographic plans. And now it has been adapted for the mining industry. ”

Operational and objective control of mining objects using traditional means is very laborious. They are characterized by constant variability of the boundaries of the position and volumes of dumps, tailings and ore stocks. “To perform a tacheometric survey of one object requires at least two specialists for a long period of time. As they say, both in the rain and in the cold with tens of kilograms of equipment, they have to bypass kilometers of objects, says Vyacheslav Lapin, director of the UMMC Technical University. “Unmanned aerial vehicles allow taking pictures of hard-to-reach places in a short period of time, excluding the presence of employees of the enterprise and not putting them at risk.”

Today, among specialists, UAVs equipped with 3D laser scanners are widely used. But along with high accuracy, this equipment also has a high cost. The specialists of TU UMMC tested an alternative, more economical and promising technology - using shooting with a high-precision camera and subsequent digital processing of the footage.

At the facilities of Uchalinsky GOK, the survey was carried out by a DJI Phatom quadrocopter with an integrated RTK module, which positions the copter in real time with an accuracy of a centimeter and with a minimum absolute error of image metadata. The shooting process itself is fully automated: the aircraft's flight path is precisely determined and the display parameters are set. When the drone's battery is discharged, the program allows you to interrupt the process, replace the battery and continue recording from the same point.

“The experimental series of surveying the blade with a copter from a height of 100 and 200 m took only 1.5 hours, together with the preparation and the flight itself ... The processing of the received data took less than 4 hours. For comparison, a conventional survey using electronic tacheometers and data processing would take from 3 to 5 days ", - shared the results of the experiment, the head of the Department of Development of Mineral Deposits of the TU UMMC Alexei Krasavin.

In the process of processing the results of field work, scientists TU UMMC also assessed the accuracy of the digital model of the object. The survey error was 0.061 m in plan and 0.067 m in the height of the object (only about 6 cm for an object with an area of ​​about 80,000 m 2 ), which confirmed the possibility of using UAV imagery as a topographic base and model for calculating the volume of mine workings.

“The obtained results can be integrated into the digital model of the mine - the Micromie geographic information system. This will allow us to update the digital model of the entire mining and processing production of the enterprise and expand the possibilities for accounting and control of the volumes of mining operations and facilities, ”Zakaria Gibadullin, Director General of Uchalinsky GOK, shared his prospects.

On this topic
In the mine shaft "of the Skip-Cage" Novo-Uchalinsky mine passed first horizon
The TMK Board of Directors recommends accepting the voluntary offer of the TMK subsidiary in
"KRU" creates a fleet of drones
Uchalinskiy GOK established in Uchaly stationary ecological post
On Uchalinsky underground mine arrived new mine trucks
Uchalinsky GOK started sinking the shaft of the Skipo-Kletovaya mine
Добавить комментарий
Комментарии (0)
News Analytics
US Provides $ 20 Billion in Government Support to Airlines to Pay Salaries02-12-2020, 19:25
Metinvest closes its first securitization deal02-12-2020, 19:05
Sanjiv Gupta one of these days will find out all the financial secrets of the02-12-2020, 19:18
EU asks Biden to abolish duties on steel and aluminum02-12-2020, 15:16
Mariupol plant named after Ilyich produced the first 20 thousand tons of02-12-2020, 15:54
European Union scrap collectors worried about possible export restrictions18-11-2020, 10:41
Occupational diseases of workers in the extractive industry: types and ways to16-11-2020, 17:49
Eurofer expects recovery in EU steel demand05-11-2020, 09:47
Hot rolled carbon steel demand will continue to grow by 4% pa until 203004-11-2020, 16:14
Platts Steel Trade Review: China Will Decide Asia's Fate30-10-2020, 10:04
Sign in with: