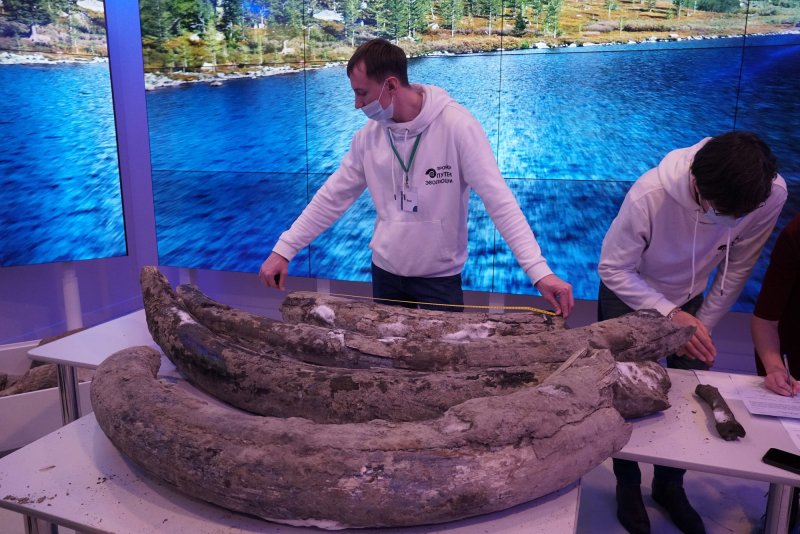 The Kuzbassrazrezugol company (an enterprise of the raw materials complex of the Ural Mining and Metallurgical Company) handed over to the Kuzbass State Museum of Local Lore another paleontological find - four mammoth tusks and a metacarpal bone of a primitive horse. The remains of ancient animals were found in January this year during stripping the upper horizons of the site No. 1 of the Kedrovsky coal mine branch. A P & H-2800 excavator team (foreman Airat Akhmetov) found them in a clay layer. The miners took out the fossils, cleaned them and prepared them for transfer to the museum. “First, we will carefully examine these bones: we will carefully examine all the chips and cracks, impregnate them with a special solution to make them presentable. Then we will try to determine the age of each animal, although even without analysis we can say that the tusks, for example, belonged to adults, even old mammoths. Then the exhibits will be exhibited in the museum, ”emphasizes Dmitry Slobodin, head of the Department of Scientific Research and Expeditions of the Kemerovo Regional Museum of Local Lore. Paleontological finds are not uncommon for the Company. In the 60s and 70s of the twentieth century, the collective of the Kedrovsky cut already donated fragments of a mammoth skeleton to the museum. In the new century, the miners of the Mokhov section found fragments of the lower jaw and femur of a cave lion that died out at the end of the Ice Age, the remains of primitive bison, a mysterious stone disc, which scientists believe to be a geological formation more than 260 million years old, and fossilized trunks of ancient trees - kordaites. All these invaluable geological and paleontological samples are presented today in the department of nature of the Kuzbass State Museum of Local Lore. “All employees of our Company understand that such finds are really of great value. This is not the story of one particular enterprise. This is the history of the entire Kuzbass. It is very important to preserve the finds so that not only our fellow countrymen, but also the guests of our region can touch this story, "- comments Larisa Beresneva, head of the public relations department of the Kuzbassrazrezugol Management Company JSC.

On this topic
Kuzbassrazrezugol launched the second EKG-35
Kuzbassrazrezugol has renewed its locomotive fleet for 18 diesel locomotives
In the criminal code "KRU" has determined the best driver of the most powerful Russian excavator
The TMK Board of Directors recommends accepting the voluntary offer of the TMK subsidiary in
"Kuzbassrazrezugol" has got the second Shadrinskiy locomotive
Kuzbassrazrezugol miners set a world drilling record
Добавить комментарий
Комментарии (0)
News Analytics
Iran is satisfied with the reaction of the world community to 60% enrichment of18-04-2021, 13:24
Gas prices in Ukraine have reached a record value over the past two years -16-04-2021, 17:24
Ukrmetallurgprom asks the Antimonopoly Committee to allow Metinvest to bid for16-04-2021, 17:23
A fatal accident occurred on the territory of the Dnieper Metallurgical Plant16-04-2021, 13:01
Cars built for Euro 2012 will be repaired at the Kryukov Carriage Works16-04-2021, 12:46
World Steel Association predicts a good year for metallurgists15-04-2021, 18:19
World Steel Association defines green steel and its variations12-04-2021, 13:14
China unlikely to cut steel capacity in 2021 due to high steel prices07-04-2021, 12:11
Scrap metal market at the beginning of April02-04-2021, 11:10
Rising Chinese Prices Fueled Rising Global Steel Prices - MEPS25-03-2021, 18:54
Sign in with: