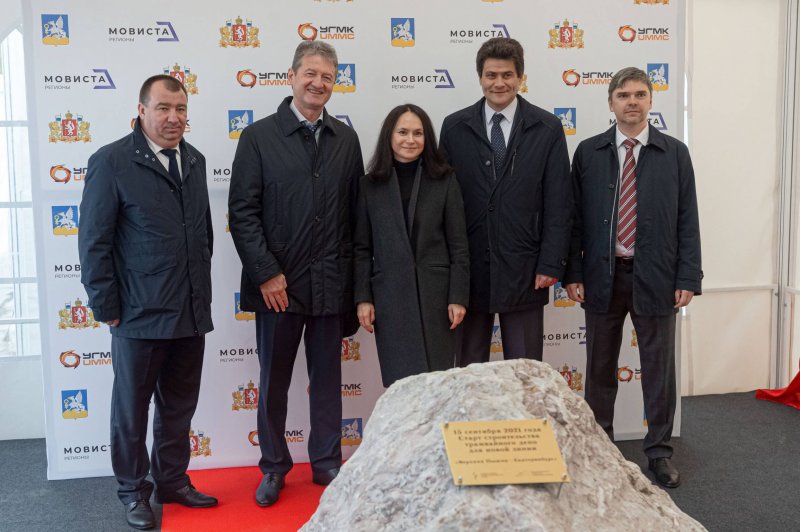 “We thought for a long time how to connect Yekaterinburg and Verkhnyaya Pyshma in addition to highways - there were many options, but in the end we settled on a tram,” Andrey Kozitsyn, General Director of UMMC, addressed those present. - And so today we are laying the depot. I must say that none of this would have happened if not for the support of the regional administration, the administrations of Verkhnyaya Pyshma and Yekaterinburg. Only builders and designers know what it means to build a tram line in the 21st century, to get all the approvals and permits. We have overcome all this, and I would like to say a separate thank you to Transmashholding, which took an active part in the implementation of this project. The construction is already nearing completion, and the most modern trams will soon run along this line. Dear friends and colleagues! I congratulate all of us on this great event! After the start of the tram, people will easily get from Verkhnyaya Pyshma to the metro in Yekaterinburg. Many thanks to everyone! ".

" The faster the transport moves, the faster the local economy develops, "said Alexander Vysokinsky, First Deputy Governor of the Sverdlovsk Region. - The tram line, which will connect Yekaterinburg and Verkhnyaya Pyshma, is almost finished, today we are taking another step - we are laying the tram depot. Verkhnyaya Pyshma will be an intermediate point when moving from Yekaterinburg to Sredneuralsk. This project is controlled by the governor of the region, Evgeny Kuyvashev, and with the support of our partners - the Ural Mining and Metallurgical Company, Transmashholding, in fact, we get another point of transport and economic development. ”

The project for the construction of a depot and maintenance of the tram line, as well as the supply of modern rolling stock is carried out under a concession agreement by the Movista-Regions company. The volume of investments will amount to 1.8 billion rubles. Up to 80% of capital investments in the construction of a tram depot - about 1.04 billion rubles - will be used to purchase products from regional manufacturers. We are talking about metal structures, rails, bulk materials, as well as products of the machine-building complex.

The area of ​​the building site is 2.25 hectares. Technical and administrative premises will be located on four floors of the main building. The production building will include areas for daily and routine maintenance, repair of rolling stock, an automatic car wash, an electric car charging room, a first-aid post and a rest room. The space and layout are organized in such a way as to achieve maximum functionality and comfort for depot employees when working at every point of the building.

In total, the project will create more than 90 jobs.

Length of the tramway the line is more than 17 km, the route provides 14 stops - 10 in Yekaterinburg and 4 in Verkhnyaya Pyshma. Travel time will be 25-30 minutes, which is 30% less than what passengers are spending now. 11 thousand people will be able to use the tram service between Yekaterinburg and Verkhnyaya Pyshma every day, which will amount to about 4 million people a year.

Финансовая аналитика, прогнозы цен на сталь, железную руду, уголь и другие сырьевые товары. More news and analytics on Metallurgprom telegram channel - subscribe to get up-to-date market information and price forecasts faster than others.
Сomments
Добавить комментарий
Комментарии (0)
On this topic
Mandrivnik Spodin Igor
Metallurgists of MMSK will have a new depot
Products "Izhstal" marked with the quality mark of the XXI century
Severstal became the General partner acceleration program AND START
TMK takes part in the energy forum "Russian Fuel and Energy Complex in the XXI Century"
Acting Governor of the Orenburg Region Denis Pasler visited Metalloinvest's Novotroitsk plant
News Analytics
British Steel owner asks government for financial support05-10-2022, 13:05
The price of gold crossed the mark of 1700 dollars05-10-2022, 13:28
US coal prices top $20004-10-2022, 10:16
Tata Steel merger plan to secure long-term profits03-10-2022, 10:46
US hydrogen prices to drop to zero dollars per kg in 5 to 6 years: Platts02-10-2022, 21:53
China production cuts in winter will give limited boost to steel markets -15-09-2022, 10:09
Steel prices may rise as manufacturers stop production11-09-2022, 14:06
IREPAS: The global long products market is in a "dramatic situation"10-09-2022, 20:49
Steel prices are unlikely to rise significantly in the near future - analysts02-09-2022, 22:58
Steel prices may move up on new data from China31-08-2022, 12:19
Sign in with: