the city of Uchaly (Republic of Bashkortostan)

In the city of Uchaly launched stationary ecological post for carrying out measurements of emissions of pollutants into the atmospheric air. On the basis of the calculation of the consolidated JSC "Sri Atmosphere" (Saint-Petersburg) object installed on the territory of the Uchalinsky College of mining industry and carries out continuous monitoring of the four marker substances of the plant - of sulfur dioxide, carbon monoxide, nitrogen oxide, nitrogen dioxide, and dust by various factions. For definitions of each marker substance is provided in a separate device - the detector.

"the Ecological post will enable the company to timely track the changes of concentrations of pollutants in the air and to react promptly to deviations in the different components," - said the chief ecologist of JSC "Uchalinskiy GOK" Oleg Danilov. 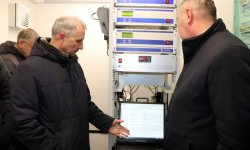 Software stationary post "the System of ecological monitoring of the environment" allows you to define the location of pollution sources, to assess their contribution and impact on the current environmental situation, to create a map of air pollution, to identify adverse meteorological conditions under which for a time increases the concentration of pollutants.

System in real-time predicts the state changes of the environment that are accompanied with excess of maximum permissible concentrations of pollutants, informs and warns about emergency situations, carrying out continuous automatic control of air pollution in the city limits.

"In our jurisdiction ecopost be installed first. It is of interest to the population of the city Uchaly and organizations, which supervise the state of the environment", - said Chairman of the Beloretsky area Committee of the Ministry of ecology and natural resources of the Republic of Bashkortostan albert Ibragimov.

Ecopost transmits the measurement data of the first environmental service ulichansky ODC, and then in the office of the state analytical control of the Republic of Belarus. From there, the decoded indices are sent in a Single duty dispatching service and the administration of the Uchalinsky area.

While the equipment ecopost only tracks the marker substance Uchalinsky GOK, but it provided cells for extra analyzers for fixing components, which are discharged to the atmosphere other enterprises of the city. In the implementation of the environmental project Uchalinskiy GOK has invested about 10 million rubles.

Обозреватель рынка стали и цветных металлов. Пишу аналитические обзоры рынка для Металлургпром. More news and analytics on Metallurgprom telegram channel - subscribe to get up-to-date market information and price forecasts faster than others.
Сomments
Добавить комментарий
Комментарии (0)
On this topic
Uchalinsky GOK started sinking the shaft of the Skipo-Kletovaya mine
UMMC optimizes the project for the development of the Novo-Uchalinskoye field
A vocational guidance platform was created in the children's camp of the Uchalinsky GOK
On Uchalinsky underground mine arrived new mine trucks
On Uchalinskiy GOK has started to work "smart" drilling rig
The TMK Board of Directors recommends accepting the voluntary offer of the TMK subsidiary in
News Analytics
Ukrainian court invalidated sale of Ferrexpo Plc shares in 200222-09-2022, 12:45
EU Commission not doing enough to save aluminum industry - associations21-09-2022, 11:07
Steel market in Europe expects big production cuts due to weak demand20-09-2022, 11:13
Ford warns investors to cut car deliveries due to parts shortages20-09-2022, 10:43
The price of lithium resumes insane growth after Elon Musk's remarks20-09-2022, 10:54
China production cuts in winter will give limited boost to steel markets -15-09-2022, 10:09
Steel prices may rise as manufacturers stop production11-09-2022, 14:06
IREPAS: The global long products market is in a "dramatic situation"10-09-2022, 20:49
Steel prices are unlikely to rise significantly in the near future - analysts02-09-2022, 22:58
Steel prices may move up on new data from China31-08-2022, 12:19
Sign in with: