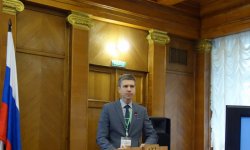 05 December 2019 Executive Director of the Association of Russian Steel, Alexey sentjurin and other representatives of the Association took part in one of the most significant events for the steel industry Russia in the sphere of technical regulation of the IV International conference "CHARMETTOGER-2019".

the Conference has been held in SSC FSUE "tsniichermet im. I. P. Bardin". The event was organized by: Association of Russian Steel, SSC FSUE "tsniichermet im. I. P. Bardina" and the RSPP Committee for technical regulation, standardization and conformity assessment with the support of Minpromtorg of Russia and Rosstandart. In 2019, the event was timed to the 25th anniversary of the work of the Technical Committee for standardization TC 375 "steel Products from ferrous metals and alloys".

In the plenary session was attended by Executive Director of Association of Russian Steel, Alexey Senturin, Deputy General Director of SSC FSUE "tsniichermet im, I. P. Bardin" Gennady Eremin, First Deputy Chairman of RSPP Committee for technical regulation, standardization and conformity assessment the President of the Council for technical regulation and standardization under Minpromtorg of Russia, Andrei Lotsmanov, representatives of relevant Departments of the Ministry of industry and trade and Rosstandart, as well as leading industry and regional associations.

the Speakers of the plenary session paid particular attention to changes in legislative, regulatory and technical base. One of the most pressing challenges has highlighted the necessity to react promptly to all changes made by the mechanism of "regulatory guillotine". Speakers called on the expert community to take an active part in implementing the "regulatory guillotine" in the field of Metrology and conformity assessment to avoid a legal "vacuum" in the Russian Federation or withdrawal of the existing protection of the domestic the steel industry from unfair imports after January 2021, the date approved by the Government of the Russian Federation as the final implementation of this mechanism.

So, the Executive Director of the Association of Russian Steel, Alexey sentjurin in his speech presented a diagnosis of the state of the domestic steel industry, and key parameters the status of the external markets in the first 9 months of this year showing negative trends: a decline in exports of metal products 13%, accompanied by slowing domestic demand for steel products after growth in the first half, and increased protectionism and the closure of Russian metal products on the foreign markets. Alex Senturin said that today the implementation of the requirements of foreign standards is one of the key tools to maintaining the competitiveness of Russian metal products on the foreign markets. Also, Alex sentjurin noted the importance of the currently available mechanisms for the protection of the Russian producers, in particular through the use of resolutions of the Government of the Russian Federation from December 1 2009 city № 982 from December 26, 2014 no. 1521. "That's why we all important, by implementing the mechanism of "regulatory guillotine", not to forget the basic problem, inherent in it, is to abolish excessive control and supervision, which put pressure on the business and not to deprive him of the protection or to create a legal "vacuum", which can lead to structural problems," said Alexei sentjurin.

in Addition, the conference reviewed the development of standardization in the Russian Federation and improving its legislative framework, the issues raised in the development of national and interstate standardization in the framework of implementation of government programs, digitization technologies and standards, process automation etc. In the framework of the conference took place the solemn rewarding of experts TK 375 for special contribution to its results of operations. The awardees included representatives of companies-members of Association "Russian Steel" of JSC "Severstal", JSC "MMK", JSC "Evraz", etc. the meeting ended with an open meeting of TC 375.

Association of ferrous metallurgy enterprises "Russian Steel" brings together the largest producers of steel products in Russia. The Association was founded in 2001 by leading metallurgical companies in Russia to coordinate efforts to protect the interests of the Russian metallurgists and the implementation of joint projects of non-commercial nature. The member companies of the Association produce 98% of Russian iron, about 90% of Russian steel and rolled about 60% of the pipes, as well as a significant proportion of raw materials for metallurgical industry.

Independent journalist. Specially for Metallurgprom More news and analytics on Metallurgprom telegram channel - subscribe to get up-to-date market information and price forecasts faster than others.
Сomments
Добавить комментарий
Комментарии (0)
On this topic
Momentum of progress: the first cross-industrial conference and exhibition Smart Industry
SinTZ was visited by delegations of Japanese companies JFE Steel Corporation and Metal One
MMK Places $ 500 Million Eurobonds
MMK is among the leaders of the Institutional Investor rating
Notification of changes in the share capital structure
Severstal operating results for 1Q 2019
News Analytics
Russian metallurgists will need more than 10 years to replace imports of key09-08-2022, 07:23
China reduced steel exports in July by one million tons or 12%08-08-2022, 17:41
World steel prices have moved from a protracted fall to growth08-08-2022, 16:27
Ferrexpo's net profit in the first half of the year decreased by 88%03-08-2022, 10:20
Ukrainian gas transportation system allowed to pump biomethane03-08-2022, 10:18
The US market may begin a collapse in prices for thick sheet14-07-2022, 09:39
High iron ore shortage could halt metallurgy's green transition28-06-2022, 14:02
Price volatility hits global steel market27-06-2022, 19:28
Recovery in China could be key to rising global steel prices - MEPS24-06-2022, 14:00
Conflict in Ukraine spurs Europe's drive for clean energy03-06-2022, 12:14
Sign in with: