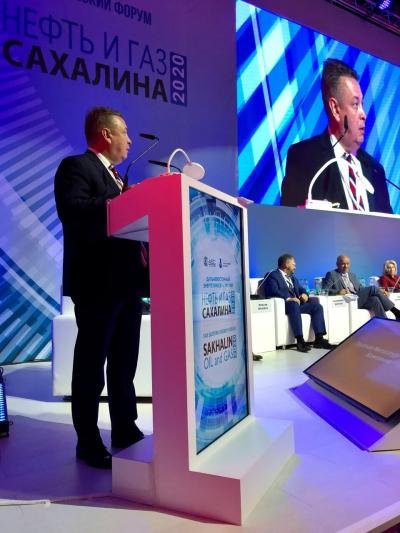 The delegation of the Pipe Metallurgical Company (TMK) took part in the 24th international conference "Oil and Gas of Sakhalin-2020" in Yuzhno-Sakhalinsk, which this year acquired the status of the Far Eastern Energy Forum.

At the conference Sergey Rekin, Director for Development and Technical Sales of Premium Products of TMK, General Director of TMK-Premium Service, spoke in a panel discussion on local content, localization and import substitution. He spoke about the positive experience of TMK in the supply of high-tech premium pipe products to oil and gas companies that operate offshore projects in Sakhalin.

“We are strengthening cooperation with our consumers, oil and gas companies, and are aiming to expand our presence in Sakhalin not only as a supplier of pipe products, but also due to the increase in services around the pipe, that is, the provision of a comprehensive accompanying service, "said Sergei Rekin in his speech. According to him, the transition to a system of comprehensive service support for the supply of premium pipe products will allow TMK to effectively manage the supply chain from the plant to the well and form the production program of enterprises in accordance with the drilling plans of oil and gas companies.

Within the framework of the forum, the delegation of TMK, headed by Sergey Chikalov, Deputy General Director for Scientific and Technical Development and Technical Sales, held a number of fruitful meetings with representatives of the Sakhalin Oblast government, as well as leading oil and gas companies. In particular, members of the TMK delegation took part in a working meeting between the Governor of the Sakhalin Region Valery Limarenko with contractors of various projects being implemented on the island and potential residents of the new investment project - the Sakhalin Oil and Gas Industrial Park. Within the framework of the exhibition area, the TMK stand was presented at the forum, where meetings with clients and consumers of the company's products were held.

The Sakhalin Oil and Gas Annual Conference is the largest and oldest international event dedicated to the oil and gas sector of the Russian Far East ... The conference was first held in 1996 in London; since 2007 it has been held in Yuzhno-Sakhalinsk. This year's event was held from September 30 to October 1.