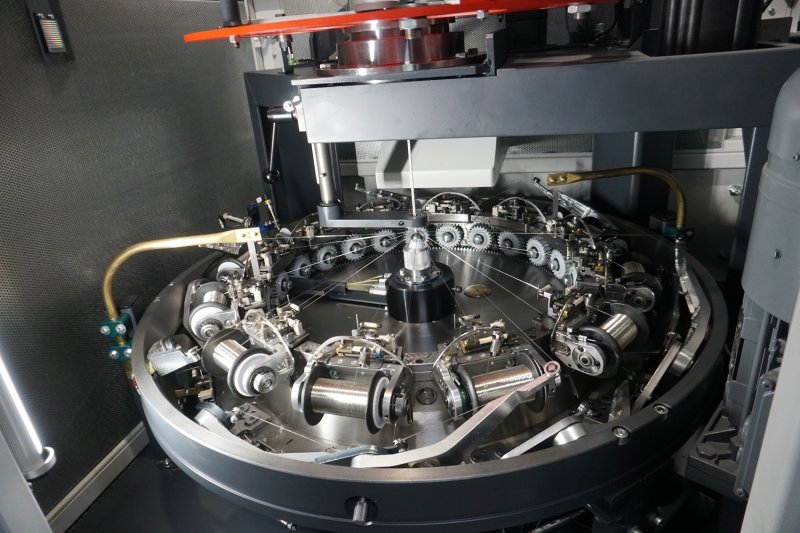 Kolchuginsky plant "Elektrokabel" (part of the "Cable Alliance Holding", which unites the cable assets of UMMC) installed five new braiding machines in two workshops. The amount of the contract was more than 30 million rubles. In workshop No. 4, three machines were installed, which are designed for braiding with copper wires semi-finished control cables and control cables. This type of screen protects the cable from electrical interference and ensures the operation of the automation in the event of a short circuit. Two more machines are installed in the fifth workshop, where the braiding will be carried out with synthetic threads. They serve as additional protection of the cable from mechanical damage, while maintaining the flexibility of the product, which is important when it is used in confined spaces, for example, in rolling stock. “In the fourth workshop, new lines are installed in addition to the existing ones, which will increase productivity, and in the fifth - to replace equipment that has served more than 20 years. Of course, we kept it in working order, but it is morally outdated, "said Dmitry Tsarkov, deputy director of EKZ JSC for production. The speed of the new machines is twice as high as that of its predecessors. An even more significant advantage is the high level of automation. The system instantly triggers in the event of an end or break of the wire (thread). This greatly facilitates the work of the operator, who serves several machines at the same time, and eliminates the waste. “It is impossible to solve the ambitious tasks that we set ourselves in the near future without modernizing the production base. New requirements for cable design, advanced technologies - all this requires us to continuously improve. We value the reputation of the plant, we do our best to fully meet the demands of the most demanding customers and ensure a stable future for the working team, "said Evgeny Sukhodoev, director of EKZ JSC.

On this topic
The TMK Board of Directors recommends accepting the voluntary offer of the TMK subsidiary in
The equipment of factory "Electrocable" has replenished with six braiding machines
New equipment was installed at the Elektrokabel plant
Elektrokabel plant will provide Kolchuga with strategic facilities
Elektrokabel has expanded its equipment fleet for the production of control cables and control
Elektrokabel modernized the production of cables for large power engineering
Добавить комментарий
Комментарии (0)
News Analytics
Tibet invests about $ 30 billion in infrastructure projects in 5 years06-03-2021, 14:39
Siemens Energy promised Deutsche Welle to closely monitor democracy in Belarus06-03-2021, 10:32
US and EU suspend the collection of duties that were imposed against each other05-03-2021, 22:48
Turboatom and Electrotyazhmash discussed prospects for cooperation under05-03-2021, 19:04
DMZ Yaroslavsky in February almost doubled the production of rolled products05-03-2021, 18:19
Spread between raw materials and high strength alloy steel in Europe increased01-03-2021, 20:21
Increase in prices is forecasted in the markets of steel raw materials -26-02-2021, 09:25
Troy ounce of gold will drop $ 500 in two years - Fitch25-02-2021, 18:29
Global iron ore production growth to outstrip cumulative production in India23-02-2021, 10:22
Fitch Ratings Warns of “Shocking Impact” on Fossil Fuel Exporters18-02-2021, 14:44
Sign in with: