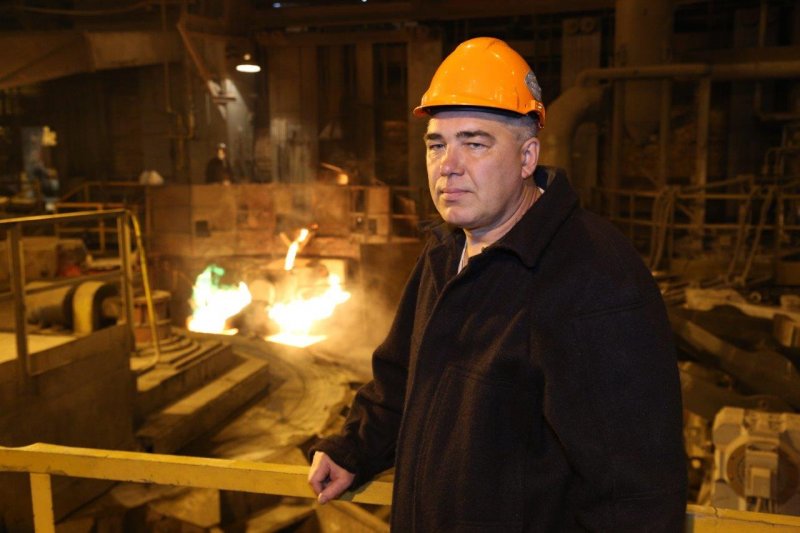 By the decree of the President of the Russian Federation, four employees of Uralelectromed JSC (an enterprise of the UMMC metallurgical complex) were awarded state awards. For merits in the field of metallurgy and many years of conscientious work the honorary title "Honored Metallurgist Of the Russian Federation ”was awarded to the smelter of the copper-smelting shop Oleg Akulov, the caster of non-ferrous metals for the production of copper wire rod Pavel Zoteev, the hot-dip galvanizer for the production of steel structures Vladimir Mukhortikov and the hydrometallurgist of the chemical and metallurgical shop Nadezhda Garayeva.

not everyone on the way. It requires high qualifications, professionalism, an innovative approach to work and dedication to their work. So, Oleg Akulov for 30 years of work has grown in skill from the second category to the sixth. As a senior smelter, he was among the first to master "automation" at the third anode furnace, and then at all the others. He took an active part in the launch of the gas cleaning facilities of the workshop in 2003 and the fifth anode furnace in 2012. With his direct participation, the technical re-equipment of the casting complexes of five anode furnaces of the shop was carried out.

40 Pavel Zoteev has been working at the enterprise for years, of which - 21 years, since the foundation of production, as a non-ferrous metal caster on a wire rod. He took an active part in the installation and commissioning works and the development of unique imported equipment for the production of copper wire rod. For 15 years he has been the head of the foundry team. With his direct participation at the rolling mill, a number of projects were carried out aimed at improving the quality of finished products and improving the operation of equipment, including the introduction of a high-pressure emulsion supply system to the rolling mill stands.

Vladimir Mukhortikov began his career at Uralelectromed in 1991 as a cleaner in a copper smelting shop. Then in 2000 he moved to the copper electrolysis workshop as a matrix sheet processor. And with the opening of the hot-dip galvanizing shop in 2005 (today, Steel Structure Production - PSK), I decided to try myself as a galvanizer. Vladimir Anatolyevich has comprehended all the intricacies of hot-dip galvanizing of metal structures, having thoroughly studied the technical process. Participated in the launch of a line for galvanizing small products. In 2014, together with other shop workers and specialists from the German company Pillig, he was replacing the main galvanizing bath. In 2016, the shop where Vladimir Mukhortikov works, galvanized a record amount of products - 50,000 tons. Over 15 years of operation, this figure amounted to 516 691 tons of metal structures.

Nadezhda Garaeva worked at the enterprise for 35 years as a hydrometallurgist. Of these, 19 years - in the chemical and metallurgical workshop in the processing department of industrial products. Nadezhda Zinovievna took an active part in setting up equipment and technologies, introducing new processes for cleaning industrial solutions. For example, in the construction of a site for the processing of industrial solutions of the hot-dip galvanizing department of PSK and the chemical and metallurgical workshop in 2005, the commissioning of modernized lines for neutralizing industrial and storm water in 2013.

All four employees of Uralelectromed JSC were previously awarded various corporate and government awards. We note that in November last year, by the decree of the President of the Russian Federation, Damir Makhiyanov, a railway crane operator at the railway workshop of JSC Uralelectromed, was awarded the honorary title of Honored Transport Worker of the Russian Federation.