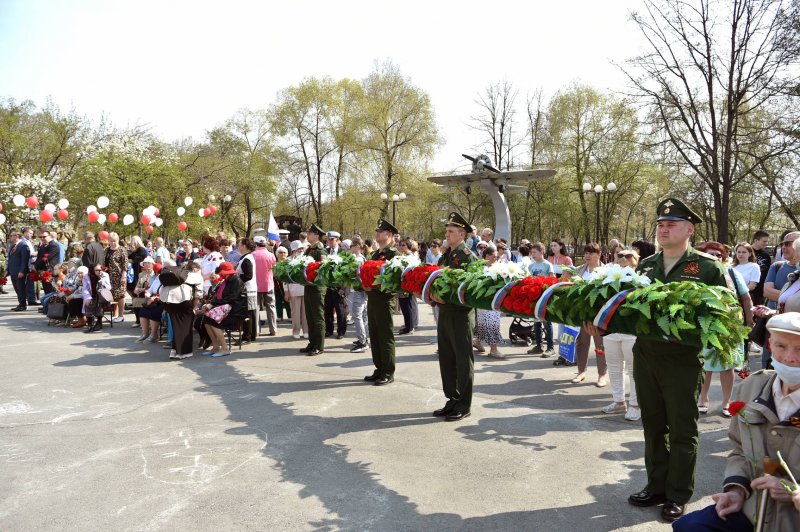 Victory Day celebrations in the Copper Capital of the Urals began with a citywide action in memory of "Forever carved in stone".

Head of Verkhnyaya Pyshma Ivan Solomin, Director of JSC Uralelectromed Vladimir Kolotushkin and representative of the UMMC management Alexei Svalov laid flowers at the memorial to the fallen soldiers of Verkhnyaya Pyshma in the Park of Military Glory. In total, over 5,000 residents went to the front, more than 2,000 people did not return.

Four of our fellow countrymen were awarded the title of Hero of the Soviet Union, two became full holders of the Order of Glory.

Among those who went to the front, 667 workers of Uralelectromed remained on the battlefields. the memory was honored with a rally at the memorial complex "Cranes", laying flowers and a minute of silence.

“ Dear veterans! Dear friends, dear colleagues, guests, everyone who could be here today on our holy day, on the Day of Victory over fascism, ”the general director of UMMC Andrey Kozitsyn addressed the audience. - This is a difficult, difficult, big - the most important holiday of the country! Unfortunately, there are fewer and fewer veterans. They leave, but those who are, who are with us today - we must remember them, see them, look at them, and even if they speak very quietly, try to hear and hear the most important thing - what they say. Because as long as there is memory, as long as this memory is transmitted through those people who are with us, not everything is lost for our children, they see everything, they will remember it. Because this is our future, without the memory of the war and the victorious warriors, our country will not have the right to life! ".

The most touching part of the rally is the presentation of" Destiny "by the General Director of UMMC Andrey Kozitsyn to two warriors-factory workers reported missing to their relatives.

Gibadulin Satar worked at the Pyshminsky mine, in the Tsentralnaya mine. Together with his wife, they raised four daughters. In 1941, Satar went to the front. On the battlefield, he proved himself to be a fearless warrior and an effective machine gunner. In July 1942, communication with him was interrupted. But the relatives did not lose hope. His daughters were looking for him, the grandchildren continued to search, but there was not enough information. During the archival work, it was possible to establish that the machine gunner of the 906th Infantry Regiment of the 243rd Infantry Division, Corporal Gibadulin Satar, who was considered missing during the defense of the Kalinin Front, died in captivity in Hungary on May 12, 1945. Our fellow countryman was buried with all military and spiritual honors in Hungary, in the city of Baja, at the garrison military cemetery. Satar Gibadullin is the founder of the labor dynasty of JSC "Uralelectromed", which includes 19 people who worked at the enterprise in different periods. At present, the traditions of the working family are continued by six of its representatives already in the 4th generation. The total experience of all members of the dynasty is about 300 years.

The hero's fate was handed to him grandson, granddaughter and great-grandson - Zufar Khaziev, Advisor to the HR Director of JSC UMMC, Alfiya Tyulyapkina, specialist in documentation of the copper electrolysis workshop of JSC Uralelectromed, and Ruslan Gibadulin, Chief Specialist of the Competitive Procedures Division of the Department of Public Procurement of the Sverdlovsk Region.

Tigiev Sergey Tembolatovich was the eldest son in the family, an example for two brothers and three sisters. He went to the front at the age of 16. He took part in successful military operations, including the liberation of the Suoyarvi region, the assault on which began on July 11, 1944. The traces of Sergei Tembolatovich were lost on the battlefields. For many years, the parents were looking for their son,

Финансовая аналитика, прогнозы цен на сталь, железную руду, уголь и другие сырьевые товары. More news and analytics on Metallurgprom telegram channel - subscribe to get up-to-date market information and price forecasts faster than others.
Сomments
Добавить комментарий
Комментарии (0)
On this topic
The eternal flame from the factory furnace, Victory Waltz, Procession of military equipment and a
June 24, Verkhnyaya Pyshma: Alley of heroes, the dress-up calculation, the Fate of the soldier and
May 9 in Verkhnyaya Pyshma: Eternal flame from the factory oven, Victory Waltz, Procession of
On the Day of Memory and Grief, workers and veterans of Uralelectromed JSC laid flowers at the
Relay concert for veterans and the All-Russian action "Dove of Peace" - Victory Day is
Izhstal honors war and labor veterans
News Analytics
Eurofer expects EU steel demand to fall 4.6% in 2022 and 1.6% in 202305-02-2023, 13:31
EU Green Deal should encourage investment in mild steel projects: Eurofer02-02-2023, 16:32
Belarusian steel plant to operate at full capacity from February02-02-2023, 16:56
British Steel considers cutting up to 1,200 jobs at Scunthorpe02-02-2023, 11:50
Electric vehicles will play a key role in US aluminum production growth - Norsk01-02-2023, 12:17
European stainless steel producers ready to raise prices31-01-2023, 16:16
S&P: Russia will continue to dominate the steel export market in the Black05-01-2023, 11:22
Fitch Analysts Predict Big Drop in Global Steel Consumption This Year14-12-2022, 13:59
Analysts predict 5% annual growth in the iron casting market through 203006-12-2022, 12:44
Commodity prices will fall, metals quotes will rise slightly - Focus Economics28-11-2022, 13:28
Sign in with: