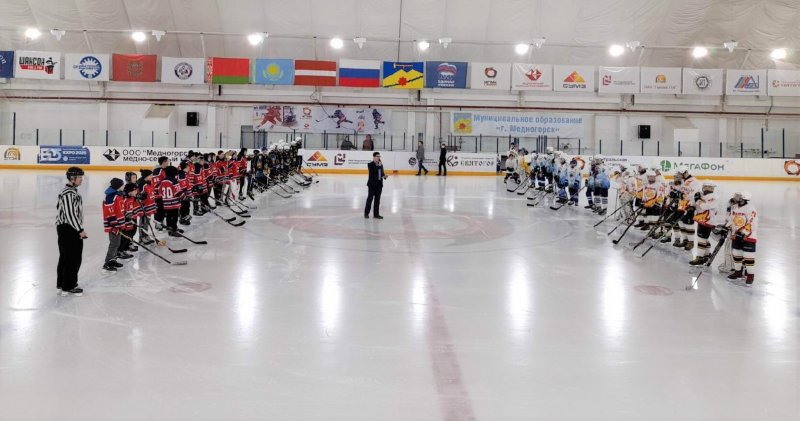 Mednogorsk Copper and Sulfur Combine (an enterprise of the UMMC metallurgical complex) supported the Metallurg children's hockey team, which took second place in the final of the Regional stage of the All-Russian competition "Golden Puck".

The plant allocated 200 thousand rubles for the purchase of sports equipment for the Children's and Youth Sports School 2 (“ice hockey” department). The heads of the plant's divisions and the parents of young athletes were present at the ceremony of awarding the money certificate.

The representative of the city sports committee Alexander Savenkov noted that this encouragement will serve as a stimulating factor in the further improvement of the skills of the students of the sports school to participate in competitions of various levels. Among them there will be a tournament for the prizes of the General Director of LLC "MMSK", where the arrival of the hockey teams that took part in the final of the Regional stage of the "Golden Puck" in Mednogorsk is expected.

Support for the development of sports is one of the active areas social policy pursued by the copper and sulfur plant in the city of Mednogorsk. So, at the end of 2020, about 72 million rubles were allocated for the development of the material and technical base of sports institutions, the organization and holding of competitions. The most significant facility is the Sokol sports and recreation complex, which was commissioned in September 2020.

In addition to the Mednogorsk copper and sulfur plant, such enterprises of the Ural Mining and Metallurgical Company as PJSC Gaiskiy GOK operate in the Orenburg Region ", (Gai), specializing in the mining of copper-pyrite ore by underground and open-pit methods and its processing at its own processing plant, Orenburg Radiator LLC (Orenburg), specializing in the development, implementation and serial production of radiator products.

On this topic
Mednogorsk metallurgists supported city health care
Mednogorsk metallurgists support urban healthcare
MMSK became the winner of the All-Russian competition
A new children's clinic opened in Kirovgrad
Parimatch accepts hockey bets again
The TMK Board of Directors recommends accepting the voluntary offer of the TMK subsidiary in
Добавить комментарий
Комментарии (0)
News Analytics
Metallurgical Plant Zaporizhstal announced the transfer of data on emissions12-05-2021, 16:46
Interpipe's 5-year Eurobonds for $ 300 mln are assigned a priority unsecured12-05-2021, 16:30
Dnipro Metallurgical Plant exceeded the April production plan by 6.7%12-05-2021, 15:45
The auto industry rushed up: the production of vehicles in Ukraine increased 1612-05-2021, 15:44
The Minister of Energy of Ukraine promised today to close the issue of wage12-05-2021, 14:24
The current state of the market is ideal for the sale of rolled steel - IREPAS04-05-2021, 18:41
Global hydrogen demand to grow 7-fold by 2070 - PwC21-04-2021, 12:31
World Steel Association predicts a good year for metallurgists15-04-2021, 18:19
World Steel Association defines green steel and its variations12-04-2021, 13:14
China unlikely to cut steel capacity in 2021 due to high steel prices07-04-2021, 12:11
Sign in with: