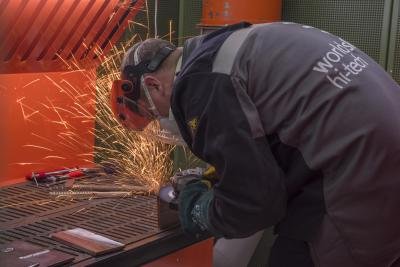 The II Corporate Championship of Professional Skills of the Pipe Metallurgical Company (TMK) on the principles of WorldSkills - Games of the Masters, which was organized by the Corporate University TMK2U from 23 to 26 July at the Seversky and Sinarsky Pipe Plants, has ended. It was attended by 57 employees of TMK and Sinara Group (GS) - winners of factory competitions of professional skills, as well as 34 experts from among the key specialists of enterprises and the best teachers of the Ural Federal University named after the first President of Russia B.N. Yeltsin (UrFU). The championship was held in eight competencies and in two age categories - Young (up to 28 years old) and Profi (from 29 years old). At the closing ceremony, the Chairman of the TMK Board of Directors, President of the Sinara Group Dmitry Pumpyansky addressed the participants and guests of the championship. He noted that WorldSkills, as a massive international movement, is successfully implementing the strategic goal of increasing the prestige of blue-collar occupations. Therefore, both TMK and Sinara Group, as leading companies, actively support the principles of the movement. Dmitry Pumpyansky emphasized that the championship brought together the best of the best and became an excellent opportunity for all participants to express themselves, get acquainted with professionals from other enterprises, and exchange experience and skills. In his address, he thanked everyone for the interesting and fruitful work and congratulated the winners of the championship. According to the results of the competition in the Mechatronics competence, the winners were Alexander Govorukhin and Dmitry Klevakin (Young category, STZ) and Alexey Vinogradov and Kirill Silin (Profi category, STZ). Valery Zhilin (category Young, STZ) and Igor Gostevskikh (category Profi, STZ) became the first in the competence "Electrical installation". In the competence "Industrial Automation", the first places were taken by Andrey Eremin (category Young, STZ) and Andrey Nizamov (category Profi, Sinarsky pipe Roman Mazhitov (Young category, STZ) and Alexander Papulov (Profi category, GS) were the best in the Turning competence. Dmitry Kharchenko (Young category, STZ) and Vladislav Zinnatullin (Profi category) won in the Welding Technologies nomination. Alena Kharkovskaya (category Young, STZ) and Anastasia Gogoladze (category Profi, STZ) were recognized as the best in the competence "Laboratory chemical analysis". competencies from the Young category will be recommended to the TMK and GS teams for participation in the VI National Championship of end-to-end blue-collar jobs in high-tech industries based on the WorldSkills Hi-Tech 2019 methodology, which will be held in October in Yekaterinburg. In addition, the winners in the “Machinist crane "and" Slinger "- they were Maria Larina (category Young, SinTZ), Alexander Kalinin (category Profi, Volzhsky pipe plant) and Maxim Larionov (category Young, SinTZ), Alexander Sukhotsky (category Profi, SinTZ), respectively. of competitive tasks, the experts were guided by the experience of participation in the national championship, followed the basic principles of developing practical tasks and criteria for assessing their implementation, which are laid down by the methodology. To carry out assignments for all competencies, special workplaces were organized on the basis of training grounds on the installed modern equipment, which is used for training and assessment activities, and now for general corporate competitions. “For the second time, we are holding a general corporate competition for working professions based on the Worldskills principles. TMK and GS plan to continue to hold similar events, because in this way we increase the efficiency of work in the main production areas, create a professional community both within the TMK Group and in synergy with the Sinara Group. The management of the companies really pays a lot of attention to personnel development, today this is the main task of the TMK2U Corporate University, "said Andrey Kaplunov, a member of the Board of Directors of TMK and Sinara Group. WorldSkills Hi-Tech is the largest professional skill competition in Russia among young professionals (from 18 to 28 years) of the largest domestic industrial companies. The Championship has been held since 2014 by the Union "Young Professionals (WorldSkills Russia)" with the support of the Ministry of Industry and Trade of Russia, the Government of the Sverdlovsk Region, the Agency for Strategic Initiatives to Promote New Projects, with the participation of major holdings and corporations.