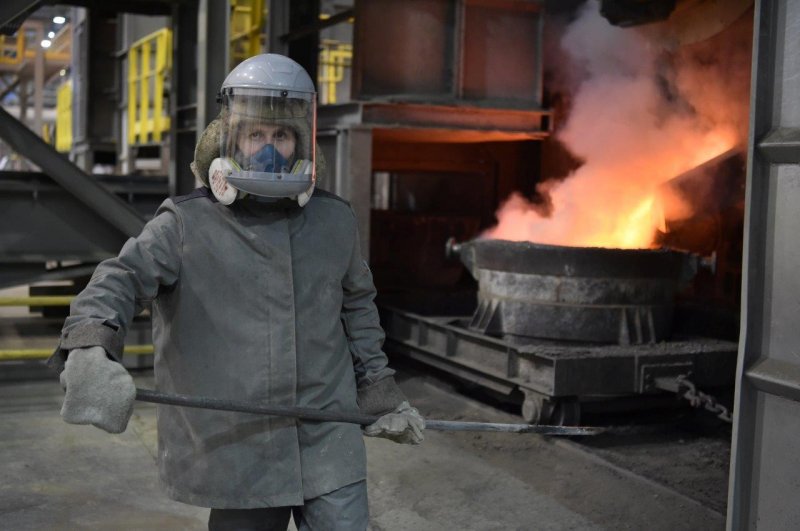 In the branch "Production of non-ferrous metal alloys" JSC "Uralelectromed" (an enterprise of the metallurgical complex of UMMC) introduced a new technology that allows you to return antimony from raw materials to the technological cycle of lead production .

Lead raw materials of the branch enter the smelting furnaces of the metallurgical shop, where as a result of melting, rough lead is obtained. Such lead contains copper, tin, antimony, bismuth and must be purified from these impurities in refining boilers, where antimony is released selectively into antimony oxides. The resulting oxides are subjected to reduction melting. Lead is recovered and returned to the technological cycle of lead production, and antimony is taken out into antimony concentrate, which is sent to the chemical and metallurgical workshop (CMC) of the main site.

From the obtained concentrate, CMC specialists produce Cy-1 metal antimony. The bulk of the obtained antimony is sold to consumers, and a small part is returned to the PSCM to re-enter the production of lead, but not as an impurity, but as a reagent.

- During the production of lead for its purification from bismuth, along with other reagents pure antimony is also used. Previously, it was purchased on the side. Now, thanks to the opening of a new production site in Verkhnyaya Pyshma, it is possible to use antimony of our own production. At present, the branch has already completely abandoned the purchase of antimony and receives it only from the KhMTs. The demand for branded antimony by PSCM is not very large - about two tons per year. But it is still cheaper to extract it from raw materials than to buy it on the side, - said the head of the production and technical department - chief metallurgist of PSTSM Alexey Timashov.

Обозреватель рынка стали и цветных металлов. Пишу аналитические обзоры рынка для Металлургпром. More news and analytics on Metallurgprom telegram channel - subscribe to get up-to-date market information and price forecasts faster than others.
Сomments
Добавить комментарий
Комментарии (0)
On this topic
JSC "Uralelektromed" will save more than 10 million rubles due to the reduction of the
JSC "Uralelectromed" completed the first stage of construction of antimony concentrate
JSC "Uralelectromed" will increase the production of precious metals with the help of the
BMZ was visited by the Minister for Industry and Agroindustrial Complex of the EEC.
The best projects of "UMMC Engineering" will be implemented in production
The largest steel wire shop BMK celebrates fiftieth anniversary
News Analytics
China's iron ore output to rise in 2023 as new projects are launched30-11-2022, 18:10
"Centravis" agreed to supply a new batch of seamless pipes to a30-11-2022, 16:51
Metinvest enterprises in Ukraine resumed work after massive shelling of29-11-2022, 11:59
The European Council added the violation of restrictive measures (sanctions) to28-11-2022, 14:22
The abolition of export duty in India may reduce the price of Turkish steel28-11-2022, 14:07
Commodity prices will fall, metals quotes will rise slightly - Focus Economics28-11-2022, 13:28
Platinum market to face shortage next year - WPIC22-11-2022, 18:25
Global steel demand falls and will fall by 2.3% in 2022: WorldSteel19-10-2022, 23:12
Iron ore prices fall to 11-month low15-10-2022, 10:36
China production cuts in winter will give limited boost to steel markets -15-09-2022, 10:09
Sign in with: