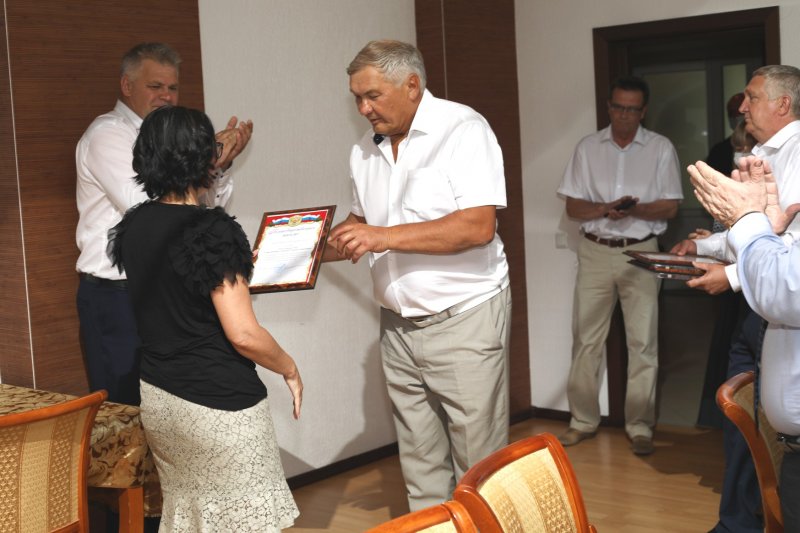 Today, the city hospital was opened in Gaya after renovation. The commissioning of a socially significant facility for the townspeople became possible thanks to a cooperation agreement between the Government of the Orenburg Region and the Ural Mining and Metallurgical Company. The opening ceremony was attended by the Governor of the Orenburg Region Denis Pasler, Vice Governor for Social Policy - Minister of Health of the Orenburg Region Tatyana Savinova, Deputy Of the State Duma of the Russian Federation, Deputy Chairman of the Defense Committee of the State Duma of the Russian Federation, Colonel-General Viktor Zavarzin, Deputy of the Legislative Assembly of the Orenburg Region Yevgeny Malyushin, Director of Gaysky GOK PJSC Gennady Stavsky, Head of the Gaysky City District Oleg Papunin. Denis Pasler in his welcoming speech called the event one of the most important for the city and the region: “Overhaul of the polyclinic, which serves almost 33 thousand people, has not been carried out for almost 20 years. Today we have not only completely renovated the building, but also purchased medical equipment. All this is the result of an effective partnership between the region, the municipality and the UMMC represented by the Gaysky mining and processing plant. We are grateful to the Company for its participation in the life of our region, in particular the Gaicans, in the development of the social infrastructure of the district, and the creation of a comfortable urban environment. Together we create conditions for people to want to live and work in this city. In just a year, within the framework of the program “Modernization of the primary health care unit in the Orenburg region”, we will build 16 FAPs and four medical outpatient clinics in the region. We will overhaul 109 more FAPs and 16 outpatient clinics. The scale of the work is serious, but the Gaiskaya polyclinic is an excellent example of why we are doing this. This is a modern, well-equipped medical facility with a professional team! " The head of the region thanked the builders for the well-coordinated and accurate work, which was completed on schedule, and wished the medical staff successful work in new, comfortable conditions, and expressed the hope that the quality of services provided to the population would significantly improve. conducted by the chief physician of the MBUZ Gayskoy CRH Alexey Fedosov. Then the ceremony of awarding the participants in the construction of an important social medical facility for the city and the region took place. Vice-Governor for Social Policy - Minister of Health of the Orenburg Region Tatyana Savinova presented certificates to the director of Gaysky GOK PJSC Gennady Stavsky, as well as to the heads of construction organizations that took part in the repair of the polyclinic. the administration, a major overhaul of the polyclinic building was carried out with the replacement of utilities and redevelopment of premises - to expand the corridors and create more free space in front of the offices. polyclinics. This year, the first floor of the medical facility was repaired: utilities, windows, doors, lighting system were replaced. Repaired floor, walls, ceiling. To separate the flows, a separate entrance from the street to the office of an infectious disease doctor was made. A video surveillance system was installed in the building, navigation was convenient for visitors. The central entrance group was repaired, emergency exits were repaired. The territory of the institution was also transformed - the entrance gates were installed, shrubs and trees were trimmed, new asphalt was laid near the building. From 2019 to 2021, the total amount of financial investments of Gaysky GOK for the renovation of the polyclinic is 61.5 million rubles.

Финансовая аналитика, прогнозы цен на сталь, железную руду, уголь и другие сырьевые товары. More news and analytics on Metallurgprom telegram channel - subscribe to get up-to-date market information and price forecasts faster than others.
Сomments
Добавить комментарий
Комментарии (0)
On this topic
SinTZ was visited by delegations of Japanese companies JFE Steel Corporation and Metal One
Mikhailovsky GOK presented to the head of the Ministry of Natural Resources unique projects for the
The superheaters of the boiler
How to quickly and efficiently clean an apartment after renovation
Equipment from the supplier "Zelaz"
Selection of turbomolecular pumps
News Analytics
British Steel owner asks government for financial support05-10-2022, 13:05
The price of gold crossed the mark of 1700 dollars05-10-2022, 13:28
US coal prices top $20004-10-2022, 10:16
Tata Steel merger plan to secure long-term profits03-10-2022, 10:46
US hydrogen prices to drop to zero dollars per kg in 5 to 6 years: Platts02-10-2022, 21:53
China production cuts in winter will give limited boost to steel markets -15-09-2022, 10:09
Steel prices may rise as manufacturers stop production11-09-2022, 14:06
IREPAS: The global long products market is in a "dramatic situation"10-09-2022, 20:49
Steel prices are unlikely to rise significantly in the near future - analysts02-09-2022, 22:58
Steel prices may move up on new data from China31-08-2022, 12:19
Sign in with: