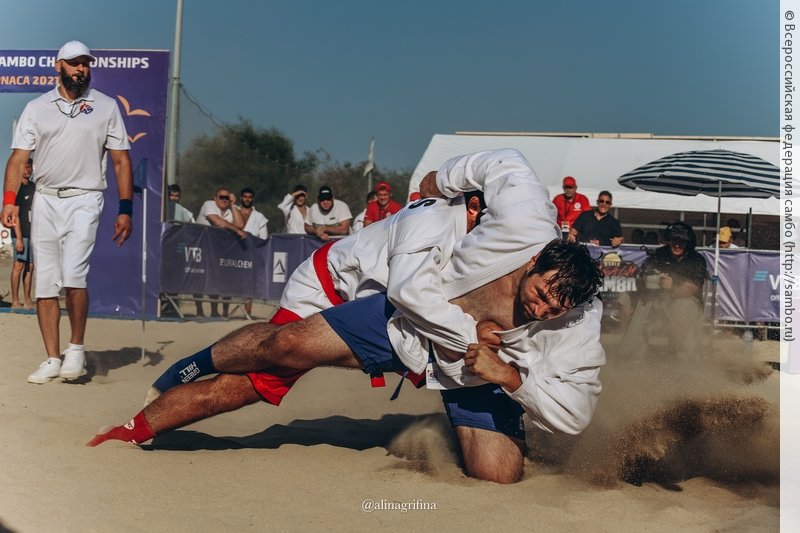 Heavyweight Artur Khaptsev from Verkhnepyshminsky CS UMMC became a two-time winner of the first ever World Beach SAMBO Championship, which finished the day before in Larnaca (Republic of Cyprus).

In the final of the individual tournament in the category over 88 kg, Arthur faced a real giant from Romania Daniel Natea, whose height is about two meters and weighs more than 150 kg. However, the almost two-fold superiority in size did not help the Romanian athlete win. The historic world championship was brought to the Verkhnepyshminsky by a very technical and cunning toe from the inside. Prior to that, Arthur first defeated the host of the competition Nicholas Papadopoulos with the back step, and then with the front step put an end to the meeting with the Ukrainian Timur Samedov.

To his personal gold medal, Arthur also added a victory in the team championship among national teams ... One by one, our compatriots defeated first a very strong Romanian squad, and then, in the final, the Ukrainian national team. Moreover, this was done, as they say, with a clear advantage, without the slightest chance for an opponent.

- In fact, this is a new sport, it is very different from ordinary sambo. You constantly need to be on the lookout, the sand is loose, so any step can be fraught with falling, - our champion admits. - However, the impressions from this tournament are only the most positive. Still, victory is victory.

Arthur Khaptsev also revealed some of the secrets of wrestling on such an unusual surface: - When I started practicing sambo and judo in Nalchik, we trained near the local hippodrome, and we also had a couple of grounds with sand, where we worked out certain techniques. Immediately before the World Cup in Cyprus, they trained at the base of the national team in Novogorsk, Moscow Region, as usual, on the carpet. But by agreement, we were allowed to wrestle for 5-10 minutes in a sand pit for long jump.

For the future, our two-time world champion in beach sambo prefers not to guess, but hopes to meet the world forum 2022 on a regular carpet.

In total, representatives of 12 countries took part in the first world championship in beach sambo.

Recall that the rules of beach sambo are fundamentally different from sports. The decisive role is played, of course, by the coating - after all, you have to fight not on the carpet, but on much more viscous sand. This requires a lot more physical effort, so the fights last not five minutes, but only three. Wrestling on the ground in beach sambo does not exist - only stance, victory is awarded for the first effective throw, hence the swiftness and transience of fights.

The first Russian beach sambo championship was held two months ago in Anapa, and it was the victory on it opened the way to the World Championship for Artur Khaptsev.