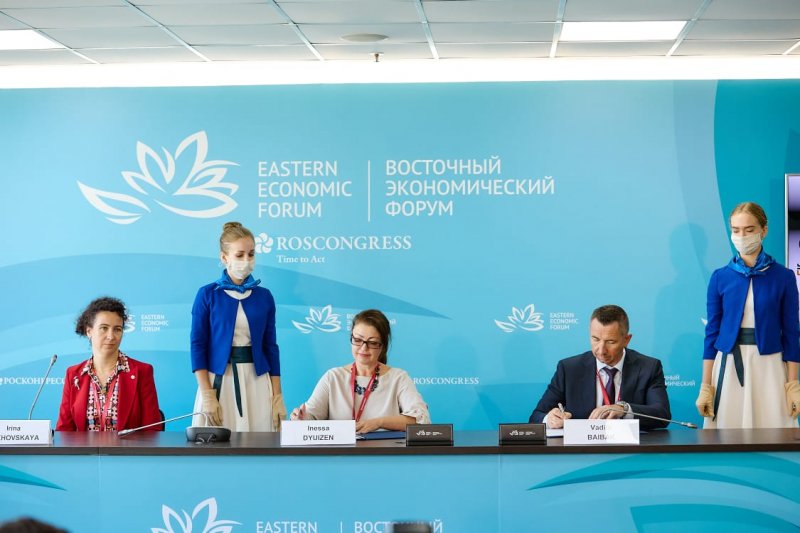 Vostochny Port JSC will provide financial and organizational support to the projects of coastal scientists aimed at studying and preserving the habitat of coastal flora and fauna, creating conditions for the stable existence of marine ecosystems in the Peter the Great Bay of the Sea of ​​Japan. The corresponding agreement on cooperation on the sidelines of the VI Eastern Economic Forum was signed by the managing director of Vostochny Port JSC Vadim Baybak and the acting director of the FSBSI National Scientific Center for Marine Biology named after V.I. A.V. Zhirmunsky "FEB RAS Inessa Duisen.

Within the framework of long-term, mutually beneficial and effective cooperation, the port workers will assist the scientific center in purchasing a mobile module for pinniped mammals. An isolated room, in which a given temperature is maintained year-round, will help scientists to keep females with calves during childbirth and milk feeding, as well as to rehabilitate individuals affected by anthropogenic impact. The agreement also provides for assistance to Vostochny Port in purchasing equipment for organizing an autonomous system of video and audio recording of the behavior of marine mammals in the natural environment, assistance in organizing expeditions to study the unique territorial grouping of the seal seals inhabiting Peter the Great Bay.

- We are happy to assist in the study and conservation of the population of such an interesting species of seal as the seal. We are sure that we will be able to study its habitat in more detail, which will allow us to preserve this species, - noted after the signing of the agreement, the honorary guest of the ceremony, Director for Port and Railway Projects of JSC UMMC Irina Olkhovskaya.

For her part The National Research Center for Marine Biology is ready to provide Vostochny Port JSC with methodological and informational support for educational environmental programs implemented by a stevedoring company from Nakhodka. Vostochny Port regularly holds campaigns and events, the overall goal of which is to preserve the environment on the territory of the enterprise. Over the past few years, by order of the stevedoring company, tens of millions of fish fry, scallops and trepangs, and kelp sprouts have been raised and released into the water bodies of Primorye. Ecomarathon has become a good tradition for Vostochny Port JSC and residents of the Wrangel microdistrict - an educational project that provides educational lectures for young people, organizes environmental tours and contests, planting green spaces and clean-ups to clean the sea coast and the seabed from garbage. This year, the "Eco-marathon" is being held for the 7th time.

Environmental safety during coal transshipment, care for the environment and residents are priority number 1 in the work of JSC "Vostochny Port". Three years ago, a five-sided agreement was signed with the administration of the Primorsky Territory, the Ministry of Transport of the Russian Federation, Rosprirodnadzor and Rosmorport, according to which the company is implementing an Environmental Action Plan to minimize the impact on the environment. The document formed the basis for the unique comprehensive environmental program of Vostochny Port JSC, in which the stevedoring company has already invested 6 billion rubles. The management of Vostochny Port JSC considers projects to support the environmental component of production activities as an integral, systematic part of its strategy, which reflects the global trend in the development of a “green” economy. The statement of Russian President Vladimir Putin at the April climate summit that our country will continue to implement a large-scale program of environmental modernization in all sectors of the economy has real confirmation in the affairs and plans of Vostochny Port JSC.

Vostochny Port JSC (Wrangel microdistrict, Primorsky Territory) is the largest specialized terminal in Russia with high-tech coal transshipment. The stevedore enterprise provides export transshipment of coal from various Russian producers. The terminal's cargo turnover in 2020 amounted to 26.85 million tons of coal products. Vostochny Port JSC at all stages of coal transshipment to sea transport uses a set of the best available technologies that minimize the impact of production activities on the environment. In particular, these are closed car dumpers, covered conveyor lines, transfer stations with aspiration systems, as well as ship-loading machines equipped with a local and all-season coal flow irrigation system, which ensure hermetic loading of coal into the holds of ships. The environmental safety of the enterprise is also ensured by aspiration systems, dry fog systems and irrigation of coal stacks with water cannons and snow generators. Along the perimeter of the terminal, 20-meter metal windscreens with a total length of 3 kilometers are installed. Today these are the largest defensive structures in the Far East. JSC "Vostochny Port" - the first coal

On this topic
JSC "Vostochny Port" modernizes the management of the aspiration system at a specialized coal
JSC "Vostochny Port" has confirmed its high efficiency in the field of water use by environmental
Vostochny Port JSC set a record for unloading coal for the winter period of 2020-21.
The Prime Minister of the Russian Federation gave the command to launch a new railway fleet of
A unique method of analysis of gold ore was developed by the specialists of "Uralmekhanobr"
Severstal signed a cooperation agreement with the Darwin State Reserve to study rare birds living
Partner news
Сomments
Добавить комментарий
Комментарии (0)
News Analytics
State Environmental Inspection filed claims against ArcelorMittal Kryvyi Rih in17-09-2021, 10:28
US Steel will build an electrometallurgical plant with a capacity of 3 million17-09-2021, 10:48
Airbus begins designing a hydrogen-powered aircraft17-09-2021, 10:06
There are already 779 enterprises in Ukraine that officially carry out17-09-2021, 09:16
Low-cost carrier Ryanair plans aggressive expansion in Ukraine16-09-2021, 21:34
Moody's changes its outlook for the mining and metals industry from "positive"14-09-2021, 18:39
European steel prices decline from summer highs and remain stable high04-09-2021, 10:38
Rise in European steel prices to dizzying levels finally fizzled out - Bloomberg27-08-2021, 13:18
Gold continues to be the most efficient portfolio asset - WGC26-08-2021, 12:38
Falling iron ore prices caught Wall Street by surprise - WSJ23-08-2021, 13:57
Sign in with: