The main "brake" in the global steel industry is expected to be China, which seeks to limit steel production ahead of the Olympic Games. 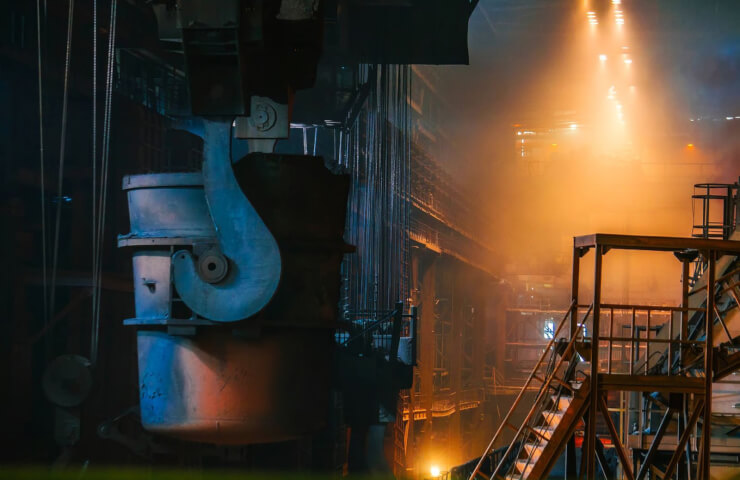 MEPS has lowered its annual crude steel production forecast to 1,940 million tonnes for 2021. However, this figure is a new peak for global steel production and represents an increase of 3.4 percent year on year.

The main reason for the revision was the recent contraction in the activity of the metallurgical industry in China. Calls from the government to cap annual production at 2020 levels were initially ignored. By the second half of the year, local authorities tightened restrictions on the activities of metallurgical plants.

Manufacturing in highly polluting industries, including steel, is under close scrutiny. Improving air quality ahead of the Beijing 2022 Winter Olympics is a priority for the Chinese administration. Consequently, total global steel production is expected to decline 3.2 percent this year.

Market participants are closely monitoring China's political decisions to determine its future ambitions. MEPS believes that the level of production in the country will grow in the next five years, but at a much slower pace than in recent years. China's share of total Asian production is expected to decline, albeit marginally.

North American crude steel forecasts are range-bound. According to forecasts, 120 million tons of liquid steel will be produced in 2026. Manufacturing in the United States accounts for over 70 percent of this total. Significant government investments in infrastructure projects are planned for the next ten years. However, regional economic growth is expected to slow after the initial recovery from the pandemic.

In the European Union, annual production is projected to increase by more than 15 percent to 153 million tonnes in 2021. Production is set to rise in the coming years, but this figure is unlikely to return to its recent peak in 2017. Germany and Italy will strengthen their position as major producers in the region. The existing plants are expected to decarbonize their operations. In addition, new installed capacity is likely to focus on low-emission green steel production. However, they should only be operational from 2026.

Manufacturing in India will continue to grow over the next five years thanks to a massive investment in steelmaking capacity. The new plants are expected to use a mixture of oxygen and electric arc furnaces. The planned modernization of large and small cities in the country will lead to an increase in steel consumption. Further widening of the gap between the annual output in India and Japan is envisaged.

In Japan, the restructuring of the domestic steel industry should lead to moderate production growth in the medium term. Uncompetitive blast-furnace production is shutting down. This should prevent cumulative crude steel production from rising above 100 million tonnes over the next five years. A similar consolidation trend is expected in South Korea and Taiwan. These mature markets have little room to increase oil production as steel consumption is already high.

In percentage terms, the largest growth in regional production is expected to be in the Middle East. It is projected that an additional 14 million tonnes of steel will be smelted annually by 2026, compared to 2020. Iran will be the main driver of production growth thanks to significant investment in new electric arc furnace plants.

South America's steel production is set to reach 45.9 million tonnes this year, the highest since 2012. An upward trend is forecast for the period up to 2026. Brazil will remain the main producer in the region.

In Africa, after a double-digit percentage increase in 2021, output growth is projected to slow in the coming years. Administrative obstacles and political constraints are likely to limit investment in new capacity in the medium term.

Финансовая аналитика, прогнозы цен на сталь, железную руду, уголь и другие сырьевые товары. More news and analytics on Metallurgprom telegram channel - subscribe to get up-to-date market information and price forecasts faster than others.
Сomments
Add a comment
Сomments (0)
On this topic
Prospects for the development of the economy and steel market in the EU in 2019-2020
MEPS predicts new record for stainless steel production
Steel production at record levels. What's next?
The world market for rare earth metals will grow by 10.4% per year
China unlikely to cut steel capacity in 2021 due to high steel prices
EUROFER: EU Steel Market in 2019. Overview and perspectives
Recommended:
Zaporizhstal Metallurgical Plant mastered eight new types of products in 2022
Europe's passenger car market records its worst year since the turn of the century
Sweden announced the discovery of Europe's largest deposit of rare earth metals
News Analytics
British scientists have found a way to cut CO2 emissions from steel production28-01-2023, 23:49
European steel price rise that began in January will be short-lived - MEPS26-01-2023, 14:44
Steel production in China rose in the first decade of January26-01-2023, 12:30
UK is ready to give 300 million pounds to save British Steel20-01-2023, 21:31
Carriage building plant in Kremenchug stopped production due to debts20-01-2023, 21:11
S&P: Russia will continue to dominate the steel export market in the Black05-01-2023, 11:22
Fitch Analysts Predict Big Drop in Global Steel Consumption This Year14-12-2022, 13:59
Analysts predict 5% annual growth in the iron casting market through 203006-12-2022, 12:44
Commodity prices will fall, metals quotes will rise slightly - Focus Economics28-11-2022, 13:28
Platinum market to face shortage next year - WPIC22-11-2022, 18:25
Sign in with: