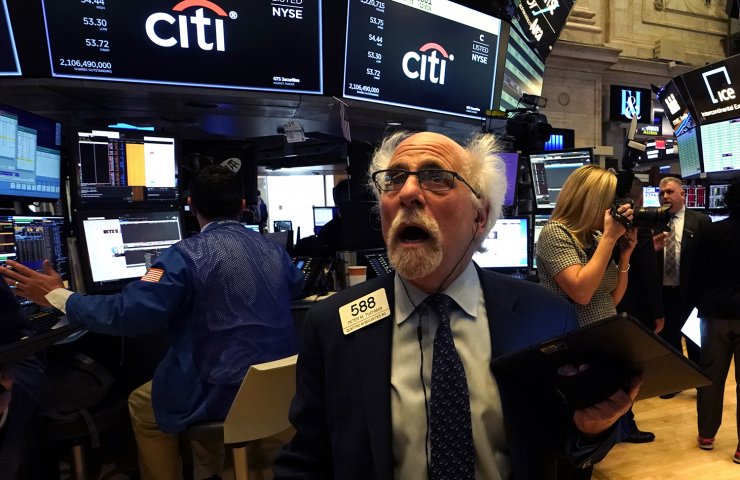 Second time in a week stock trading in the U.S. closed Wednesday fall on fears caused by the reclassification of the outbreak COVID-19 pandemic.

On the new York stock exchange U.S. Dow Jones industrial average fell by 5.86%, which is 20% below the record set last month. The Nasdaq fell 4.7%, but most of all, the stocks of companies that organize cruises and excursions.

In the "red zone" were closed on Wednesday and European stocks. The major indexes went into decline, reacting to incoming information about the further spread of the coronavirus in Europe.

But trading on the Milan stock exchange for the first time in two weeks ended in a positive field. The main FTSE MIB index, after Wednesday rose 0.33% and almost returned to the level of 18,000 points after steady declines.

Informed the Bank of England unexpectedly cut its benchmark rate by 50 points to 0.25%. Traders await the meeting of the European Central Bank (ECB), which will be held on Thursday.

According to a Wednesday morning in 114 countries confirmed 118 thousand cases of infection with coronavirus and 4 291 people died. Thousands of the infected are in critical condition and fighting for life in hospitals around the world.

"We are extremely concerned at the prevalence of the disease and its severity, as well as the lack of appropriate actions," - said the head of the world health organization, Dr tedros adhanom Ghebreyesus.

Mankind's first encounter with a pandemic caused by a coronavirus. However, this is the first pandemic, which lends itself to containment measures.

UN Secretary-General, antónio Guterres, called on all countries to heed the recommendations of the who and join together to stop the spread of the disease, without falling into panic.

Pandemic is the spread of a new disease on a global scale. For example, a flu pandemic occurs when a new influenza virus and is distributed worldwide, and the majority of people do not have immunity to it. The viruses that caused previous pandemics typically originated from influenza viruses of animals.

Recommended:
Boeing возобновил производство 737 MAX на заводе компании в Рентоне
The tax claims to metallurgists for transactions with scrap metal is absurd – the President "Ukrmetallurgprom"
Производство и потребление металлопроката в Украине за 4 месяца 2020 г.
On this topic
Продажи машин в Китае в первой половине февраля рухнули на 92% из-за коронавируса
Reuters: coronavirus threatens to send the Asian economy into recession
Due to the outbreak of an unknown virus in China, falling steel prices
Los Angeles Times: a Perfect storm in the American market of steel
ArcelorMittal сократила прогноз роста глобального потребления стали
Азия сталкивается с наплывом китайской стали из-за действий Вашингтона
Add a comment
Сomments (0)
News Analytics
Corum Group of Rinat Akhmetov and the Czech investment company signed a05-06-2020, 12:53
The coalition "enough is Enough grass Krivoy Rog" visited ArcelorMittal checking05-06-2020, 11:57
Reuters: US will punish all those involved in the construction of "Nord stream04-06-2020, 13:39
The Dnieper metallurgical plant launched blast furnace No. 204-06-2020, 12:41
The South Korean Prosecutor's office demands to arrest the Vice-President of04-06-2020, 11:06
Global steel consumption in 2020 will be reduced by 6.4% - Worldsteel04-06-2020, 13:53
American steelmakers are faced with an unexpected problem associated with the14-05-2020, 09:09
Relying on the incentives, Chinese steelmakers increase production30-04-2020, 10:20
The rapid recovery of the steel market in China leads to a drop in iron ore22-04-2020, 13:11
Platts: steel Market of China will not be able to recover until the second half20-04-2020, 12:25