For motors of this line, great opportunities open up in terms of re-equipment of used equipment. 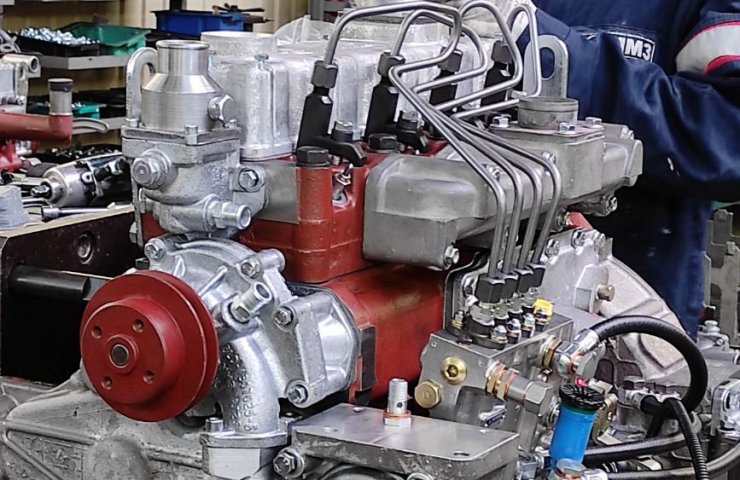 The Minsk Motor Plant launched the production of the first industrial batch of diesel engines of the new MMZ-4D /4DT /4DTI /4DTG family. Consumers from Belarus, far and near abroad show great interest in it. The plant has already secured pre-orders for the new engine by the end of the year.

The first MMZ-4D engine was manufactured under the supervision of technologists, designers, heads of specialized workshops, and foremen. It was assembled meticulously from units and parts, according to the developed technology, while adjusting the technical process. Further - tests at the stand and the engine is ready to go to the consumer.

Small-sized four-cylinder engines with a working volume of 2.1 liters, from 49 to 75 hp. from. - these are new developments of the specialists of the Minsk Motor Plant. Their value and competitive advantage lies in the fact that they belong to the standard size of well-known German and Japanese motors, but are much easier to operate and maintain. The availability and constant availability of original parts, an expanded distribution network and the presence of dealer companies in many countries of the world allow us to say that the cost of this motor will also be lower than imported counterparts.

Last year, positive feedback was received on the results of tests of prototypes of engines as part of a variety of equipment from various manufacturers (mini-loader made in the Republic of Belarus, a sweeping-vacuum machine, diesel generator sets of various capacities of Russian manufacturers, and others).

Great opportunities open up for motors of this line in terms of re-equipment of used equipment. The first example of such a re-equipment - the UAZ-469 car with the MMZ-4DTI-02 engine - has been exhibited with great success at exhibitions and has received many interested responses in the press. The market for used UAZ vehicles is huge, this equipment has no analogues of the re-equipment of engines in the budgetary pricing policy.

To meet the demand at the enterprise as soon as possible, it was decided to manufacture in 2021 the first industrial batch of engines of the MMZ-4D /4DT /4DTI /4DTG line, taking into account the need to reduce the time and money for preparing production, using bypass technologies.

In terms of their design, the motors of this line represent the development of the subcompact three-cylinder MMZ-3LD engine. Many common commercially available parts are used, such as piston, connecting rod, cylinder liner. However, there are also significantly structurally different parts, which required a separate preparation of production, starting from the stage of making castings. First of all, castings of basic parts - the cylinder block and the cylinder head, the production of which is being debugged at the new foundry at the branch in Stolbtsy.

Финансовая аналитика, прогнозы цен на сталь, железную руду, уголь и другие сырьевые товары. More news and analytics on Metallurgprom telegram channel - subscribe to get up-to-date market information and price forecasts faster than others.
Сomments
Add a comment
Сomments (0)
On this topic
Belarus pays serious attention to the joint development of scientific and technical developments
Minsk Motor Plant expanded its presence on the Pakistani market with a large contract
Belarus celebrated the 60th anniversary of the release of the first BELAZ
Rally on BELAZ trucks: competition of dump truck operators was held in Kuzbassrazrezugol
After the introduction of Western sanctions against Belarus, its steel exports to Russia grew by 20%
Pavel Volya and Vadim Galygin ride the largest mining dump truck in the world
Recommended:
China's leading industrial profits fall 2.1% in first 8 months
The European Commission plans to create a European hydrogen bank with a budget of 3 billion euros
For 8 months of 2022, steel production in Ukraine fell by 64.5%, to 5.2 million tons
News Analytics
EBRD downgrades Ukrainian economic growth forecast for 2023 from 25% to 8%28-09-2022, 13:57
EU plans additional sanctions against Russian metallurgy27-09-2022, 10:34
The European Commission has approved 5.2 billion euros of state support for27-09-2022, 10:43
China's leading industrial profits fall 2.1% in first 8 months27-09-2022, 10:20
Moody's changed the outlook for the global mining industry to26-09-2022, 19:04
China production cuts in winter will give limited boost to steel markets -15-09-2022, 10:09
Steel prices may rise as manufacturers stop production11-09-2022, 14:06
IREPAS: The global long products market is in a "dramatic situation"10-09-2022, 20:49
Steel prices are unlikely to rise significantly in the near future - analysts02-09-2022, 22:58
Steel prices may move up on new data from China31-08-2022, 12:19
Sign in with: