KAMAZ presented at the international exhibition COMTRANS-2021 an innovative product in the segment of passenger transport - the first water bus. The novelty will appear on the streets of Moscow very soon. We understand how hydrogen fuel will help ecology and how the new hydrogen electric bus KAMAZ-6290 works. 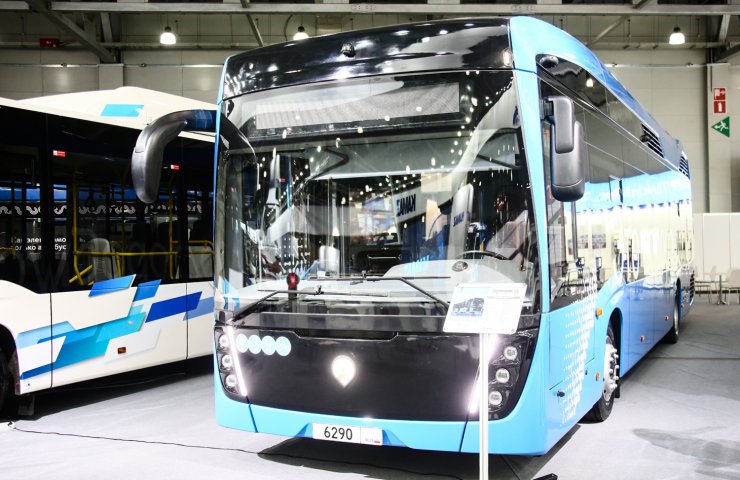 Hydrogen is the fuel of the future

In August this year, Russian Prime Minister Mikhail Mishustin approved the Concept for the Development of Hydrogen Energy. In fact, a new industry is being created in Russia. As noted in the document, today the global demand for hydrogen is about 116 million tons. The main consumers are still industries such as the oil refining and chemical industries. The global market for hydrogen as an energy carrier does not yet exist. According to experts, with the development of environmental initiatives, attention to this area will grow. Eco-friendly transport on hydrogen fuel - the realities of the near future.

Automobile transport on hydrogen fuel cells is now actively developed by KAMAZ. It's not only about trucks, but also about passenger transport. KAMAZ electric buses have been traveling along the streets of the capital for three years and have proven themselves well both in terms of comfort for passengers and as their contribution to improving the ecology of the country's largest metropolis. Well, the electric buses will be replaced by water buses, or rather hydrogen electric buses.

Hydrogen-fueled vehicles are ten times more environmentally friendly than conventional diesel buses thanks to reduced exhaust emissions. When using hydrogen, only water vapor and heat enter the atmosphere. This type of transport is ahead of even electric buses in its environmental friendliness. Electricity is also considered a clean fuel, but it has one drawback that hydrogen does not have in principle. The question is how electricity is obtained. A rather strange situation can arise when people receive electricity in a not most environmentally friendly way, but at the same time actively use electric vehicles.

The first hydrogen electric bus will start rolling in the capital already in 2022. A prototype of the KAMAZ water bus will take to the streets of Moscow. At the same time, the issue of creating the necessary charging infrastructure will be resolved. Only after that will the new eco-friendly water buses be able to fully operate on Moscow routes.

The ideas of using hydrogen for public transport, and thereby improving the ecology of large cities, are being discussed in many countries. Back in 2017, the World Hydrogen Technology Council was established at the World Economic Forum in Davos. The goals of the organization were to invest in hydrogen projects, as well as to actively popularize this environmentally friendly type of fuel.

According to a Deloitte study, in 2019, 35 hydrogen-fueled passenger buses operated in the United States, 76 in Europe, 18 in Japan, and China was ahead of all - more than 2 thousand water buses were operated in the country. According to Bloomberg, at the end of 2020, there were a total of 4,250 buses running on hydrogen transport cells in the world. In some countries, they successfully adapt to local traditions. For example, double-decker hydrogen buses appeared in London this summer.

However, not only buses can be refueled with hydrogen. For example, the French company Alstom developed the world's first hydrogen fuel cell train. Now it runs along a 100-kilometer stretch of track in German Lower Saxony. Russia is also interested in hydrogen trains - in 2023, the first seven hydrogen trains should appear on Sakhalin. In the meantime, a new KAMAZ water bus is being prepared to enter Moscow routes.

The first water bus from KAMAZ

The first water bus based on the KAMAZ-6282 electric bus is being created. The prototype was assembled at NEFAZ, a subsidiary of KAMAZ in Bashkiria. If the new development arouses interest, it is possible to organize an assembly in Moscow. Let us remind you that KAMAZ already has such experience - electric buses are assembled at the Sokolnichesky Car Repair and Construction Plant. By the way, this year Moscow will receive a total of 350 KAMAZ electric buses.

The body of the new water bus is made of high-strength steel and safe plastic, which gives the car strength, thereby increasing safety in emergency situations. As you know, safety when working with hydrogen must be thought out to the smallest detail. In particular, all six fuel tanks are installed on the roof of the bus - in the event of a leak, hydrogen will go up and not into the passenger compartment. In addition, the water tank is equipped with a modern braking system with a hold function on a slope, the ability to block movement when the doors are open and a brake pad wear monitoring sensor. In case of emergency, braking can be carried out using a traction motor.

Recommended:
High-speed alloy design could revolutionize the hydrogen future
UK to provide £ 220m in aid to metals and food industries
Moody's changes its outlook for the mining and metals industry from "positive" to "stable"
On this topic
Gazprom Neft plans to double hydrogen production in 2024
Russia can produce 3.5 million tons of hydrogen per year with a global market of 25 million tons -
KAMAZ will supply a large batch of electric buses to Moscow
Japanese companies to complete development of hydrogen engines for ocean-going ships by 2025
Russia did not mind replacing natural gas with hydrogen in Ukrainian transit in 2035
Korean auto makers will switch to hydrogen engines with help from Chinese steelmakers
Partner news
Сomments
Add a comment
Сomments (0)
News Analytics
Free access to data on special permits for the use of subsoil was opened in28-09-2021, 18:27
Zaporozhye iron ore plant modernized crushing and sorting plant28-09-2021, 16:48
The development of industrial parks will allow to completely restart the28-09-2021, 16:19
Ukrainian Foreign Ministry summoned the Hungarian Ambassador over an agreement28-09-2021, 12:43
ArcelorMittal to Build a Billion Euro Waste Blast Furnace in Belgium28-09-2021, 12:16
Oil prices to surpass $ 90 by year end due to shortages - Goldman Sachs27-09-2021, 10:58
Moody's changes its outlook for the mining and metals industry from "positive"14-09-2021, 18:39
European steel prices decline from summer highs and remain stable high04-09-2021, 10:38
Rise in European steel prices to dizzying levels finally fizzled out - Bloomberg27-08-2021, 13:18
Gold continues to be the most efficient portfolio asset - WGC26-08-2021, 12:38
Sign in with: