Before starting production of rotor shafts, NKMZ specialists developed an individual plan of the production process, which was considered and approved by representatives of General Electric. 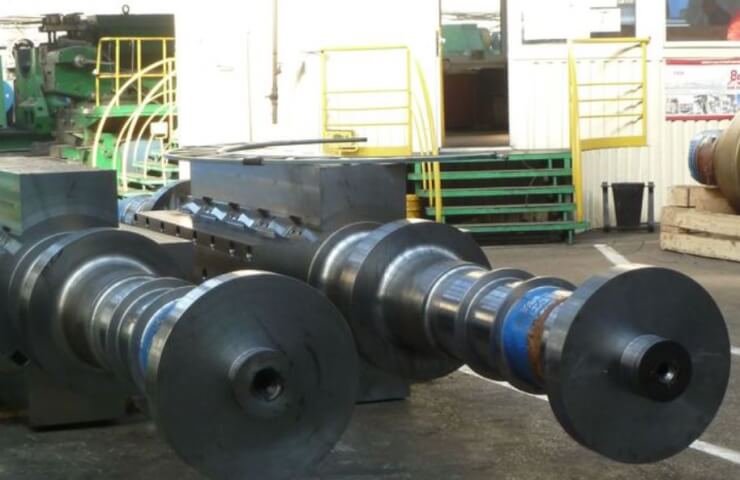 Novokramatorsk Machine-Building Plant (NKMZ) in November completed the contract for the supply of full-cycle rotor shafts for the Garret oil field project of General Electric. Each rotor weighs over 15 tons.

NKMZ started working with GE Oil & Gas division of General Electric in 2013. Then the Ukrainian company was certified as a supplier of parts with a full cycle of finishing machining for GE Oil & Gas - a world manufacturer of generators and electric motors for pumping gas and oil. During the cooperation, the machine-building plant has manufactured more than 3 thousand tons of parts for GE Oil & Gas.

The rotor shaft is a crucial part, to which very high requirements are imposed on the accuracy of machining - the value of the total mechanical runout, reflecting all the errors in its shape, should not exceed 9 microns. A feature of the manufacture of these products is a special technique for monitoring the runout and shape errors of the bearing journals of the shaft by several sensors and in different planes, which had not been used until that time when testing similar parts. To carry out this type of control, Novokramatorsk Machine Building Plant purchased sensors, equipment and software from the world's leading manufacturers - TESA (Switzerland) and Bently Nevada (USA). The corresponding equipment was also developed and manufactured.

In addition, before launching rotor shafts into production, NKMZ specialists developed an individual production process plan, which was considered and approved by representatives of General Electric. Manufacturing control and final acceptance of these products were carried out by inspectors from GE Power Conversion and Bureau Veritas.

As part of continuing further cooperation with General Electric, today Novokramatorsk Machine-Building Plant manufactures shafts weighing from 7 to 47 tons for this company. They are expected to be shipped to the customer in December 2021.