Igor Korytko: at TMK we started business transformation through the formation of an ecosystem 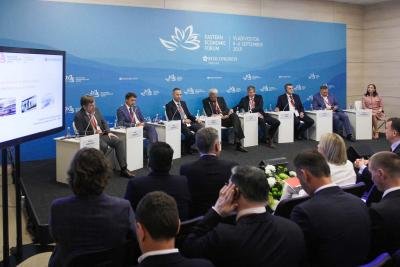 Pipe Metallurgical Company (TMK) organized a panel discussion on "Business transformation through the development of its ecosystem" within the framework of the Eastern Economic Forum 2019.

In his speech, Igor Korytko noted that in recent years the understanding of the business ecosystem has changed significantly. Due to the high requirements for the quality of the product and the increase in its complexity, large business has essentially become the core that collects all the necessary competencies for the development, organization of production of products and solutions. At the same time, around this core, not only relations with suppliers should be formed, but also educational functions, and a developed social environment, and comfortable conditions for employees.

“At TMK, we began the transformation of business through the formation of an ecosystem. This approach is consistent. In particular, if we talk about digitalization, we started with training people - with the help of the corporate university TMK2U, we outlined training programs and involved employees. In addition, we are launching our scientific and technical center in Skolkovo, creating a comfortable environment for our employees.

As a result, by creating an ecosystem, we have received an explosive growth in the number of projects that our people generate, and today the ecosystem is moving the business forward .

We create an environment within ourselves, around ourselves, develop everything that we and our people need. But we are not alone in this world, and it is very important that our colleagues - small, medium and large companies - adhere to approximately the same approach, so that government bodies support us and share our approach, "concluded Igor Korytko.

The Eastern Economic Forum 2019 is being held from 4 to 6 September on the campus of the Far Eastern Federal University (FEFU). The Forum was established by the decree of the President of the Russian Federation Vladimir Putin of May 19, 2015 in order to promote the development of the economy of the Far East and expand international cooperation in the Asia-Pacific region.

Igor Korytko: at TMK we have begun the transformation of business through the formation of an ecosystem