Over 20 years of operation, the Children of Russia Charitable Foundation has provided assistance to children in the amount of over one billion rubles 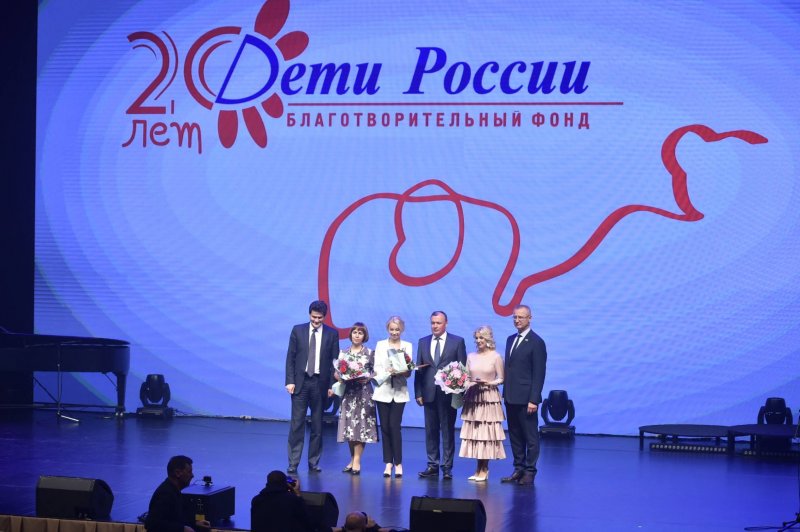 The Children of Russia Charitable Foundation (President of the Foundation - General Director of UMMC Andrey Kozitsyn) celebrates 20 years since its foundation this year. The anniversary date is dedicated to the festive concert "20 Years of Making Dreams Come True", which took place in the Cosmos KKT on September 27.

its name. Systematic work is underway to preserve and improve the health of children, as well as to develop their creative abilities. Our charitable projects are not only targeted assistance to children, the fund actively helps to solve infrastructure issues both in the healthcare sector and in the framework of other social projects, ”said Andrei Kozitsyn, President of the Children of Russia Foundation, in his congratulations.

Among the guests of honor, Acting Governor of the Sverdlovsk Region Alexei Orlov took part in the celebration of the foundation's anniversary.

He noted that such work is impossible without professionals who are passionate about their work: “Not every person tends to feel compassion, but just such people gathered here. This is a good example for all our other citizens. The projects of the Children of Russia Foundation, of course, deserve every approval. The foundation has many serious plans, and on the day of the anniversary celebration, I wish them to be successfully implemented. ”

The Vice President of the Children of Russia Charitable Foundation, Director for General Issues of the UMMC Vladimir Beloglazov thanked everyone who supports Fund activities:

“ Yes, UMMC invests heavily to this project, but taking this opportunity, I would like to say thank you to those people, among whom there are pensioners, who simply come and bring money, often anonymously, not wanting any glory, helping children. ”

The wards became the heroes of the celebration e and friends of the foundation. Among them is Sasha Kovalchuk from Barnaul, who suffers from a rare disease. Since 2014, Children of Russia have been helping her undergo life-saving treatment. Timur Fakhrutdinov, two-time European chess champion among juniors, came to the holiday. Since 2012, he has been a grant holder of the foundation and has achieved many tournament victories thanks to his support. Together with the famous musician and friend of the foundation Vladimir Shakhrin, 11-year-old Viktor Kislitsin, a boy who overcame oncology, performed. Since 2017, Victor has been participating in the Regional Stage of the World Children's Games of Winners - a unique competition for children who have recovered from cancer, which are supported by the Foundation.

Today the fund's work has gone far beyond the scope of targeted assistance. His projects are integrated into the Russian healthcare system and other segments related to helping children. From the stage with words of gratitude to the charitable organization, Honored Doctor of Russia, pediatric oncologist, head of the Center for Pediatric Oncology and Hematology of the CSTO Larisa Fechina and chief physician of the Children's City Clinical Hospital No. 9 Andrei Karlov turned to the charitable organization. For the cancer center, the fund purchased modern equipment worth 28 million rubles. In DGKB No. 9, the foundation carried out repairs worth over 120 million rubles.

Children of Russia opened 21 playrooms in hospitals and rehabilitation centers in Russia, almost 7 million rubles were spent on this. The amount of charitable assistance rendered to children who were left orphans after the terrorist attack in Beslan (Republic of North Ossetia-Alania) amounted to about 21 million rubles. In the Center for Pediatric Oncology and Hematology of the CSTO, the foundation organized the work of clinical psychologists and volunteer services. More than 14 million rubles have been allocated for this. The fund has allocated over 108 million rubles to hold and support children's, family and sports mass competitions and holidays.

On this topic
MMK Group allocated over a billion rubles to social programs and charity
UMMC organized an engineering camp on Lake Tavatui
Main day: BMZ celebrated Metallurgist Day
The eternal flame from the factory furnace, Victory Waltz, Procession of military equipment and a
Charitable Foundation "Children of Russia" presented the project "Future WE"
Metalloinvest invests over RUB 1 billion in sustainable development of the Kursk Region
Добавить комментарий
Комментарии (0)
News Analytics
Iran is satisfied with the reaction of the world community to 60% enrichment of18-04-2021, 13:24
Gas prices in Ukraine have reached a record value over the past two years -16-04-2021, 17:24
Ukrmetallurgprom asks the Antimonopoly Committee to allow Metinvest to bid for16-04-2021, 17:23
A fatal accident occurred on the territory of the Dnieper Metallurgical Plant16-04-2021, 13:01
Cars built for Euro 2012 will be repaired at the Kryukov Carriage Works16-04-2021, 12:46
World Steel Association predicts a good year for metallurgists15-04-2021, 18:19
World Steel Association defines green steel and its variations12-04-2021, 13:14
China unlikely to cut steel capacity in 2021 due to high steel prices07-04-2021, 12:11
Scrap metal market at the beginning of April02-04-2021, 11:10
Rising Chinese Prices Fueled Rising Global Steel Prices - MEPS25-03-2021, 18:54
Sign in with: