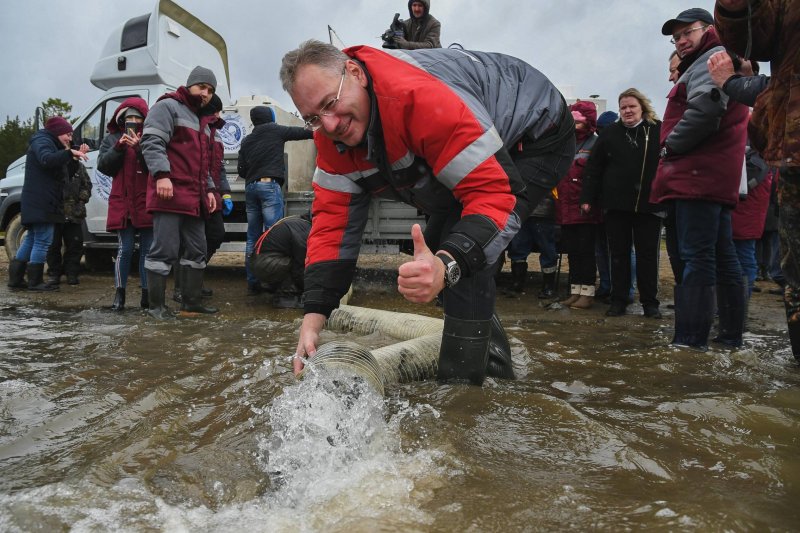 On September 27, 2019, OJSC Sredneuralsky Copper Smelting Plant (an enterprise of the UMMC metallurgical complex) released ten thousand silver carp yearlings into the Novomariinskoe reservoir (Revda urban district) within the framework of the Agreement between the Regional Government and SUMZ.

- The territory of Revda becomes a venue for environmental campaigns. A week ago, we planted a forest here, today we are stocking the Novomariinskoye reservoir, - said the Minister of Natural Resources and Ecology of the Sverdlovsk Region Alexey Kuznetsov. - This stocking is carried out under the supervision of specialists from the Ural Branch of the Research Institute of Fisheries and Oceanography, which will continue to monitor the state of the water body.

This is the tenth stocking of water bodies in the Sverdlovsk region. For the first time such an ecological action was organized and carried out by SUMZ in 2011.

- The event is very important, because the topic of ecology has always been acute for Revda. In recent years, I have received fewer and fewer appeals on this topic at the parliamentary reception, - noted the deputy of the Regional Legislative Assembly Alexander Serebrennikov.

Silver carp fry are grown in Reftinsky fish farm up to 100 grams. The fish planting material was brought to the place of release in "live" cars: special tanks with water are placed in the back, which is supplied with oxygen by small bubbles and a constant temperature is maintained.

- This is a fish of a decent breed, it will make our drinking water cleaner region, - said the director of JSC "SUMZ" Bagir Abdulazizov. - Since 2011, we have spent about 6.5 million rubles and released 2 million different fish species. We will continue this promotion further.

In vivo in 5-7 years old, the fry will become adults, the weight of which can reach more than 20 kilograms. Eating on aquatic plants and algae, silver carp thereby helps to clear water bodies from overgrowth and flowering.

- Many thanks to the Ministry of Ecology and Natural Resources and SUMZ for such actions, and for the fact that they have become traditional, - says the head GO Revda Irina Teisheva. - Residents will certainly appreciate this work. Already, fishermen say that there are more fish.