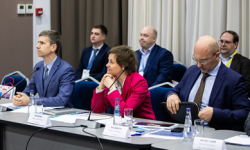 In 2018 the main drivers of growth of metal consumption of steel metal industry (+12%), automotive (+11%), machinery (+10%). Pipe industry reduced the steel consumption by 2 %, the construction sector showed zero dynamics. The revival of domestic demand in 2019, recorded at the end of the 3rd quarter (+8.6 percent), mainly due to positive changes in the legislative regulation of the construction industry and the introduction of escrow accounts from 1 July 2019.

the spread between the raw material (scrap) and finished products dramatically closer during the year, and in September 2019 this resulted in the loss of low-margin chains in a number of metallurgical enterprises. This creates additional adverse trend in the market of long products.

Alex Senturin said that in the first 9 months of 2019, there was a significant drop in exports of metal products - 13% one-time increase in the export of semi-finished products by 3% to a record in this century, the share of exports at 56%. The main reason for the decline in exports is a global problem of excess capacity and the increased application of trade barriers.

Vice-President of the Association "Russian Steel" Marina Ivanova gave detailed data on existing trade barriers. In the sector used the highest number of trade defense measures in the world, more than 400 existing restrictions at the end of 2018. Each member of the WTO account for almost 3 trade barriers on steel and steel products, and the previously imposed barriers (measures) are systematically extended.

Increasing protectionism naturally occurs in periods of adverse market. The current wave of trade barriers in the steel sector further triggered by the introduction of fees in the U.S. at 232 article. This has led to a considerable reduction in export opportunities for Russian steel companies: in 2018 was introduced 7 new restrictive measures, and by September 2019 additionally introduced 4 limitations extended for another 4 launched 5 new investigations, the results of which are expected to be new restrictions.

Together with State Secretary – Deputy Minister of industry and trade of the Russian Federation Victor Evtuhov by members of the coordinating Council discussed the possible actions of public authorities to ensure effective protection of Russian producers on foreign markets and in the EEU market.

At the meeting of the coordinating Council jointly with the Ministry of industry and trade the meeting participants also discussed external and internal factors that impede the development of the sector and outlined key steps for their solution.

a shortened version of the presentation of the Association can be found for link.

the Association of ferrous metallurgy enterprises "Russian Steel" brings together the largest producers of steel products in Russia. The Association was founded in 2001 by leading metallurgical companies in Russia to coordinate efforts to protect the interests of the Russian metallurgists and the implementation of joint projects of non-commercial nature. The member companies of the Association produce 98% of Russian iron, about 90% of Russian steel and rolled about 60% of the pipes, as well as a significant proportion of raw materials for metallurgical industry.