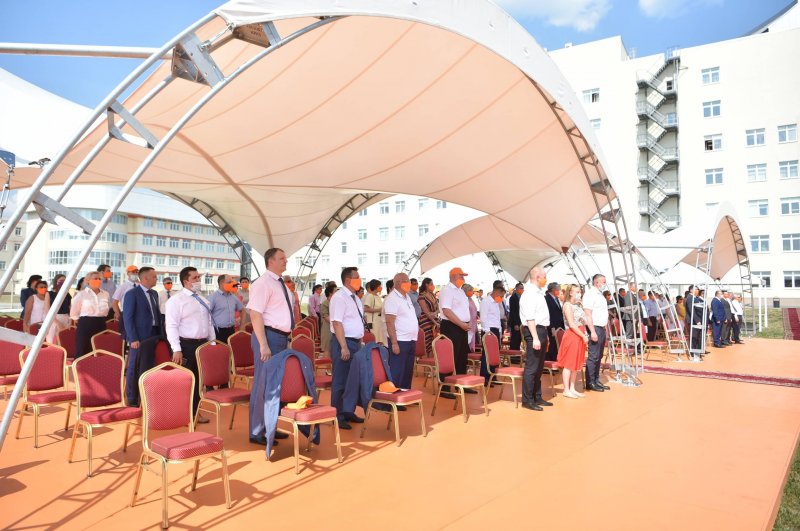 the Employees of JSC "Uralelectromed" (metallurgical complex of UMMC) meet the professional holiday-the Day of Metallurgist. The festive celebrations began today, July 16, with flower-laying to a memorable sign "the Sleeve" - the symbol of labour heroism of the factory workers during the great Patriotic war of 1941-1945, As you know, Pyshminsky copper electrolyte plant during the war ensured the country is a strategic metal – copper, alloys of copper, copper powder and other products necessary at the front. Copper enterprises in time of war was made 80% of shell liners and patronov. 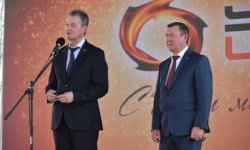 on the same day at the site was held honoring the best workers. The ceremony was attended by the General Director of UMMC Andrey Kozitsyn and the Director of JSC "Uralelektromed" Vladimir Kolotushkin. Leaders have presented the state, departmental and corporate awards to the best workers of the enterprise. This year the title of Honorary Metallurgist to be awarded: the service operator of gas installations copper plant Sergey Bukin, Deputy head of the plant for production of powder products Andrey Kamnev and chief engineer of JSC "Uralelektromed" Alex Korolev. 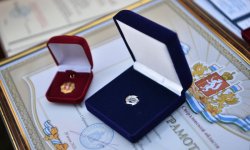 Another significant event in the life of the labor collective of JSC "Uralelectromed" is the gratitude of the President of the Russian Federation Vladimir Putin for great contribution to development of metallurgical industry and services in production activities.

Specially for the holiday on the site installed a photo zone. Workers were photographed on a background of finished products produced by the plant. The song made the bayonet of blister copper, the copper rod riot and packaging of copper cathodes.

close to midnight, the sky is the Copper capital of the Urals musical accompaniment adorn the panoramic 10-minute fireworks display with a lifting height of "lights" up to 200 meters. Verhnepyshminsky will see a voluminous iridescent balls, sparklers, a light spray of fountains and other songs.

the Celebration of Metallurgist Day and city Day Verkhnyaya Pyshma will continue on 18 July. On city streets will pass the car equipped with sound equipment and large screens for live video clips and songs dedicated to the working people. During the day – 10 to 15 hours - the machine will travel almost the entire territory of the city. July 19, the same car will travel the streets of Kirovgrad.

Note that the festivities will be held in Kirovgrad and the village of Verkh-neyvinskiy, where the branches of JSC "Uralelectromed". So, on 17 July, "Production of polymetals" scheduled videoconcert and radio broadcasts, honoring the best workers and labor dynasties of the plant.

Note that all activities are in compliance with all necessary sanitary and epidemiological requirements.

Похожие материалы
June 24, Verkhnyaya Pyshma: Alley of heroes, the dress-up calculation, the Fate of the soldier and
Main day: BMZ celebrated Metallurgist Day
Verkhnyaya Pyshma met Metallurgist Day with a colorful carnival
The eternal flame from the factory furnace, Victory Waltz, Procession of military equipment and a
May 9 in Verkhnyaya Pyshma: Eternal flame from the factory oven, Victory Waltz, Procession of
Frontline veterans and home front workers are honored at BMK
Добавить комментарий
Комментарии (0)
News Analytics
Indian state steel company to sell non-core assets19-09-2020, 18:50
Largest US steel company to lose $ 100 million in Q319-09-2020, 18:50
UN experts believe that the worst-case scenario for the Ukrainian economy can19-09-2020, 18:47
KZhRK miners' strike threatens with loss of sales markets without prospects of16-09-2020, 21:51
Privatization of the alcohol industry has started in Ukraine16-09-2020, 14:56
Iron ore prices to surpass six-year high soon16-09-2020, 10:32
World Oil Demand Peak May Be Over - BP15-09-2020, 09:05
China expands car market capacity by increasing demand for steel and metals11-09-2020, 10:56
Prices continue to rise in the long and flat steel markets08-09-2020, 14:25
Difference between ferrous and non-ferrous metal28-08-2020, 13:45
Sign in with: