In CHP plant Gaisky GOK in the midst of repair time 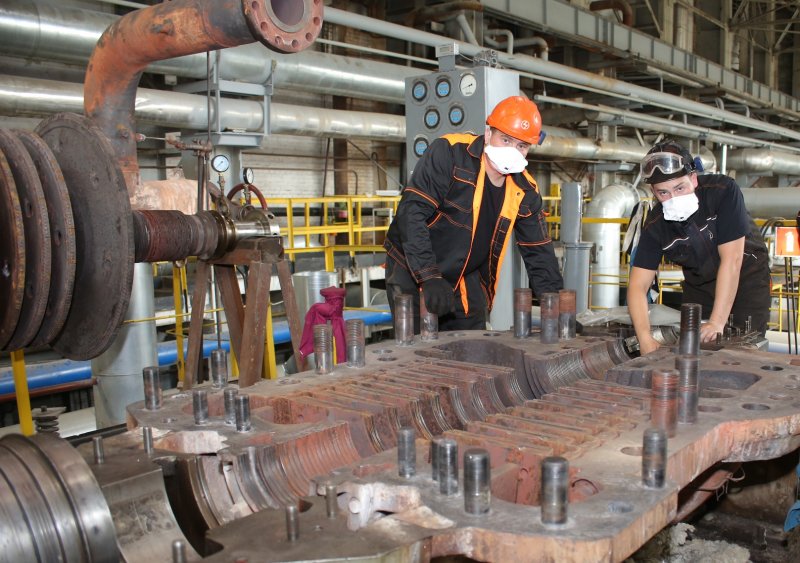 the CHP plant Gaisky GOK began with a large block of repairs. Traditionally it falls on the summer months, although the planned preventive maintenance are conducted year-round to ensure trouble-free operation of the shop. "At the present time in work there is only one steam boiler and two turbines, whereas in the conventional scheme involved three steam and four boilers and four turbines," - said the head of the CHP Rafkat Gysin.

a Large amount of repair work has been performed by staff of the site boiler and turbine equipment. In particular, they replace the heater and the refractory (fire-resistant and thermal insulation of the boiler) steam boiler number three. The staff and maintenance Department have been renovating one of the boiler and repair of one heating boiler. It has two heating boiler, two steam boilers and four turbine generating units, two of which will be fully uncovered for the Troubleshooting.

In the turbine shop is the replacement of network pumps carrying hot water for heating networks. Currently, instead of the greater part of the machines, with a capacity of 630 kW, a pump capacity of 315 kW; all new equipment produced in Russia.

"a Network pump – the most energy-intensive equipment, which consumes up to 60% of the plant electricity. Due to the fact that the load on pumps in recent years have decreased, the decision was made to replace them. The event was part of the program for schoolchildren. The replacement, which began last year, we managed a 15% reduction in electricity consumption for own needs," said Rafkat Gysin.

On this topic
JSC "Uralelektromed" will save more than 10 million rubles due to the reduction of the period of
Gaiskiy GOK completed construction of the item, repair of mining equipment on the kilometer depth
The TMK Board of Directors recommends accepting the voluntary offer of the TMK subsidiary in
The miners of the Gaisky GOK completed construction of another underground Elevator
The heroes of Professional Olympus-2019 were named at BMZ.
A new turbine unit was launched at the power plant of PJSC "MMK"
Добавить комментарий
Комментарии (0)
News Analytics
German high-speed trains will ride on Ukrainian wheels30-11-2020, 16:26
Diplomatic squabble between Beijing and Canberra crashes coke imports into China30-11-2020, 15:53
The European Commission announced the reduction of industrial emissions by 2%30-11-2020, 15:43
Ukraine does not plan to release shells and cartridges in the coming years -30-11-2020, 15:59
UK investigates human death due to air pollution for the first time in history30-11-2020, 14:37
European Union scrap collectors worried about possible export restrictions18-11-2020, 10:41
Occupational diseases of workers in the extractive industry: types and ways to16-11-2020, 17:49
Eurofer expects recovery in EU steel demand05-11-2020, 09:47
Hot rolled carbon steel demand will continue to grow by 4% pa until 203004-11-2020, 16:14
Platts Steel Trade Review: China Will Decide Asia's Fate30-10-2020, 10:04
Sign in with: