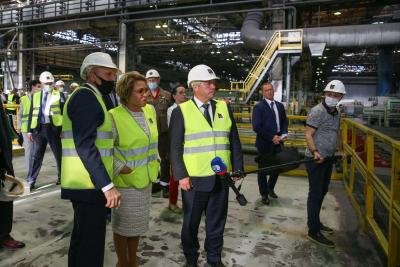 At TAGMET Valentina Matvienko was met by the Chairman of the Board of Directors of TMK, President of the Sinara Group Dmitry Pumpyansky and Managing Director of TAGMET Sergey Bilan. As part of the excursion, the Speaker of the Federation Council visited the pipe-rolling shop, where she got acquainted with the work of the first modern pipe-rolling complex in Russia with a continuous PQF mill, which produces seamless pipes for oil and gas assortment, and left an autograph on one of the samples of pipe products.

During of the visit, Dmitry Pumpyansky told Valentina Matvienko about the activities of TMK and the Sinara Group, including about the innovative developments of both groups, the introduction of the latest and environmentally friendly technologies, environmental and social projects of the companies. The speaker was also introduced to the development program of TAGMET, which today is one of the most high-tech enterprises not only within TMK, but also on the scale of domestic metallurgy. The plant is one of the largest taxpayers of the Rostov region, and its products are supplied not only outside the region, but also to foreign markets - at the end of 2019, the enterprise was recognized as the winner in the competition "The best exporter of the Don".

Chairman of the Council The Federation also presented a project for the comprehensive modernization of the urban public transport infrastructure in the cities of the Rostov region, including the example of a pilot project in the city of Taganrog, which can be implemented by Sinara-City Transport Solutions (Sinara-GTR), a joint venture of Sinara JSC - Transport Machines ”and LLC“ Regional Concession Companies ”(RKK, St. Petersburg). The concept of the project includes the renewal of the rolling stock, the development of infrastructure, the development of a new scheme for passenger transportation, the introduction of tariff menus and the transition to electronic interaction.

“We are fully aware that in total there are more than 100 km of tramways and the Taganrog trolleybus network remain the skeleton of urban transportation routes and without them the city's life will become problematic. Comfortable and environmentally friendly transport, priority of public transport over personal, transfer hubs with the creation of zones of attraction for the population - today these are the factors that will change the urban environment and improve the quality of life. And we are ready to help the municipal and regional authorities in this ", - Dmitry Pumpyansky noted during a conversation with Valentina Matvienko.

Похожие материалы
The Governor of the Rostov region got acquainted with the environmental and social projects of
TAGMET has produced a 5-millionth ton of pipes on the hot-rolling mill
The TMK Board of Directors recommends accepting the voluntary offer of the TMK subsidiary in
TAGMET won the national contest of the best practices of mentoring in the production of
TMK Announces 1Q 2019 IFRS Results
TMK Announces 4Q and 12M 2018 IFRS Results
Добавить комментарий
Комментарии (0)
News Analytics
Australia to help Europe diversify lithium imports22-09-2020, 14:28
State Energy Efficiency of Ukraine proposes to amend the law "On Public22-09-2020, 13:58
India's largest state-owned metallurgical company "doubled"22-09-2020, 13:23
Dnipro Metallurgical Plant successfully combats oxygen losses in networks22-09-2020, 12:17
BELAZ delivered three dump trucks to the Irkutsk Region22-09-2020, 12:21
Iron ore prices to surpass six-year high soon16-09-2020, 10:32
World Oil Demand Peak May Be Over - BP15-09-2020, 09:05
China expands car market capacity by increasing demand for steel and metals11-09-2020, 10:56
Prices continue to rise in the long and flat steel markets08-09-2020, 14:25
Difference between ferrous and non-ferrous metal28-08-2020, 13:45
Sign in with: