SHAAZ will send a new diesel locomotive TEM2N-UGMK to Kazakhstan 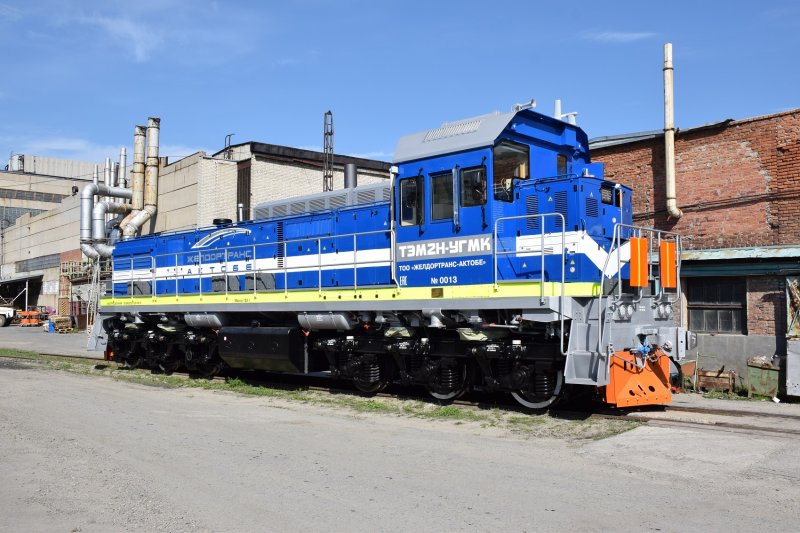 The Shadrinsky Automotive Aggregate Plant is preparing for the delivery of the TEM2N-UMMC diesel locomotive for the Kazakhstani company ZheldorTrans-Aktobe LLP. This is the first Shaaz locomotive that will operate on the territory of a foreign state.

Before being sent to Kazakhstan, the locomotive will have to undergo a set of certification tests in Moscow for compliance with the Technical Regulations of the Customs Union (TR CU 001/2011) “On the safety of railway vehicles. composition ".

- The need for certification is due to the fact that the machine at the request of the customer made some design changes, - explained the deputy. Alexander Papirovsky, technical director of SHAAZ JSC. - The company "ZhelDorTrans-Aktobe" provides services for passenger transportation, which means that additional equipment was required, which allowed, firstly, to provide the ability to drive passenger trains, and, secondly, to increase the design speed of the locomotive. If in standard configuration our diesel locomotive develops a speed of up to 60 km /h in shunting mode, then the speed of the "Kazakhstan" locomotive is increased to 100 km /h, this is already a high-speed mode of operation.

Following the first "Kazakhstan" car the second will follow, by the end of this year it will also be handed over to the customer:

- In 2019, representatives of ZhelDorTrans-Aktobe LLP, at our invitation, took part in a conference organized in Yekaterinburg by the Russian representative office of Cummis, - told the deputy. Sergey Stukov, Commercial Director of ShAAZ JSC. - One of the points of the program was a demonstration of the capabilities of the locomotives modernized at our enterprise. We visited the "Production of polymetals of JSC" Uralelectromed "in the city of Kirovgrad. Here, representatives of industrial companies were able to see the modernized locomotives in action, take a ride, talk to those who operate them. As a result, our Kazakh colleagues became interested in our project, and we signed a contract for the manufacture of two locomotives of the TEM2N-UGMK series.

TEM2N-UMMK is a new machine, as evidenced by the letter "N" in the name. Unlike the modernized locomotives, it is assembled on a completely new carriage part. The locomotive is equipped with modern control, monitoring and diagnostic systems that guarantee comfortable and safe working conditions for drivers.

Похожие материалы
"Kuzbassrazrezugol" has got the second Shadrinskiy locomotive
SHAAZ modernize shunting locomotives for the JSC MMC Norilsk Nickel
SHAAZ modernize shunting locomotives for "Norilsk Nickel"
An audit was carried out at SHAAZ as part of the certification of a new diesel locomotive TEM2N-UMMC
Diesel locomotive TGM6-UMMC is certified for compliance with the Technical Regulations of the
A new locomotive entered the MMSK railway workshop
Добавить комментарий
Комментарии (0)
News Analytics
Indian state steel company to sell non-core assets19-09-2020, 18:50
Largest US steel company to lose $ 100 million in Q319-09-2020, 18:50
UN experts believe that the worst-case scenario for the Ukrainian economy can19-09-2020, 18:47
KZhRK miners' strike threatens with loss of sales markets without prospects of16-09-2020, 21:51
Privatization of the alcohol industry has started in Ukraine16-09-2020, 14:56
Iron ore prices to surpass six-year high soon16-09-2020, 10:32
World Oil Demand Peak May Be Over - BP15-09-2020, 09:05
China expands car market capacity by increasing demand for steel and metals11-09-2020, 10:56
Prices continue to rise in the long and flat steel markets08-09-2020, 14:25
Difference between ferrous and non-ferrous metal28-08-2020, 13:45
Sign in with: