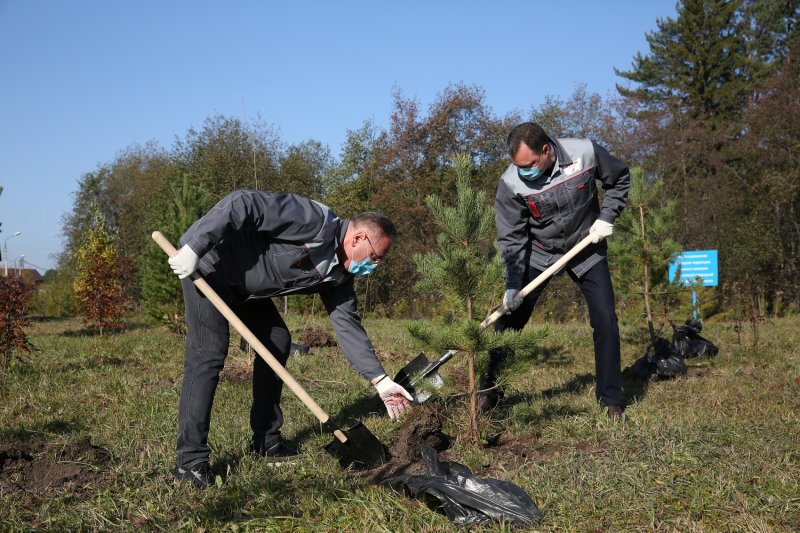 On Friday, October 2, 285 pine, birch and mountain ash saplings were planted in the Kabalinskiye springs protected natural area. They were donated by PJSC Sredneuralsky Copper Smelting Plant (an enterprise of the metallurgical complex of the UMMC). A place for landscaping was proposed by the administration of Revda.

- This is a cult place for residents of Revda, people come here to get water and just relax with their families. I appeal to everyone with a request: take care of it, take care of the trees, - said the director of PJSC "SUMZ" Bagir Abdulazizov. - And we, in turn, will continue to improve the territory of Revda.

Traditionally, the Minister of Natural Resources and Environment of the Sverdlovsk Region Alexey Kuznetsov and the deputy of the Legislative Assembly of the Region Alexander Serebrennikov took part in the action.

“Let me remind you that this action is taking place within the framework of the Agreement between the Government of the Sverdlovsk Region and SUMZ,” stressed Alexey Kuznetsov. - In addition to planting trees, we also carry out stocking of reservoirs, technical re-equipment of the plant. SUMZ is the only enterprise in the region that has joined the Billion Trees campaign. I think the residents of Revda are already seeing changes.

Since 2011, more than 6.5 thousand seedlings of birch, pine, linden, rowan, willow, blue spruce and 49 thousand spruce seedlings have been planted in Revda and Pervouralsk. The costs for these purposes amounted to 5.3 million rubles. As Bagir Abdulazizov noted, at least 6 million more will be spent until 2030 (this is the period for which the Agreement was signed).

- You can teach how to take care of the environment only by personal example, so I am always happy to take part in such promotions. Every resident of the city is able to purchase at least one tree and plant it, ”Alexander Serebrennikov turned to the residents of Revda. - Then Revda will become cleaner and greener!

Note that the Kabalinsky springs are a drinking source used by thousands of townspeople. On the bank of the Kabalinskaya river, four purest springs emerge from the ground. Two of them never freeze. The springs are popular with residents of the city at any time of the year. Families come here to get clean water and just take a walk in a picturesque corner of nature.

PJSC "Sredneuralsky Copper Smelting Plant" is one of the largest chemical and metallurgical complexes in the Middle Urals. SUMZ was put into operation on June 25, 1940.