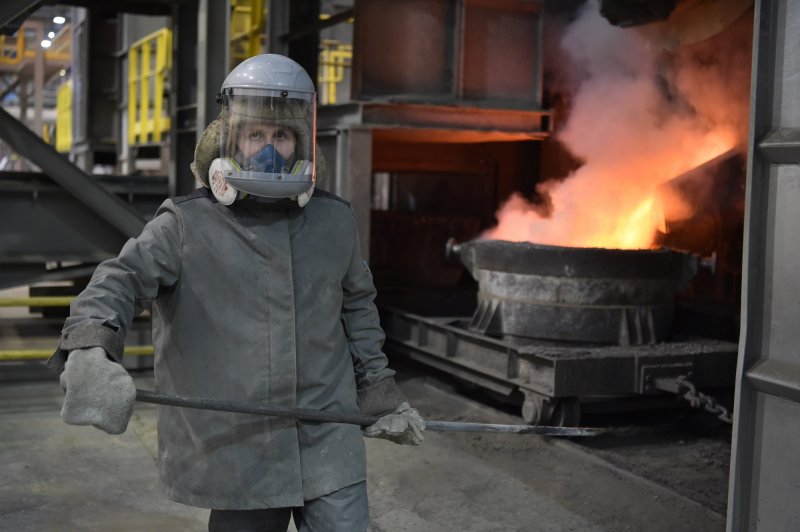 In the branch "Production of non-ferrous metal alloys" (PSTSM) JSC "Uralelektromed" (an enterprise of the metallurgical complex of UMMC) improved the production performance of crude lead production due to the introduction of rationalization proposals. The author of a seemingly simple idea, which brought tangible dividends, was the senior foreman of the rough lead department Nikolai Smirnov. time expenditures.

According to the author of the innovation, the increase in the feed hopper from 6 m³ to 9.5 m³, allowed to reduce the number of charge charges in short-drum furnaces and reduce the cooling of the melt. As a result, the metallurgical shop of PSCM increased the number of heats from 16 to 17 in two days.

- According to preliminary calculations, for eight months of work with the new bunker, we loaded the furnace charge by 4,200 tons more than in the same period last years, - he noted.

The project was attended by employees of the design bureau, who developed the documentation for the unit, and the mechanical repair shop, where the bunker was assembled.

Похожие материалы
Non-ferrous metal alloy production released record amount of lead
The TMK Board of Directors recommends accepting the voluntary offer of the TMK subsidiary in
The heroes of Professional Olympus-2019 were named at BMZ.
JSC "Uralelektromed" will extract metal from slag
In the Production of alloys of nonferrous metals has increased the capacity of the refinery
Construction of a new sulfuric acid warehouse has begun at Uralelectromed
Добавить комментарий
Комментарии (0)
News Analytics
Innovative matrix headlights on the Audi E-Tron19-10-2020, 22:43
Tensions rise between China and Australia over commodity trade14-10-2020, 18:15
The European Union confirms its intention to introduce a border tax on carbon13-10-2020, 13:20
ArcelorMittal Europe to start producing green steel from 202013-10-2020, 12:44
Kremenchug refinery launched an isomerization unit13-10-2020, 12:43
Dolomite powder market to reach USD 33.44 billion by 202705-10-2020, 12:33
Iron ore prices to surpass six-year high soon16-09-2020, 10:32
World Oil Demand Peak May Be Over - BP15-09-2020, 09:05
China expands car market capacity by increasing demand for steel and metals11-09-2020, 10:56
Prices continue to rise in the long and flat steel markets08-09-2020, 14:25
Sign in with: