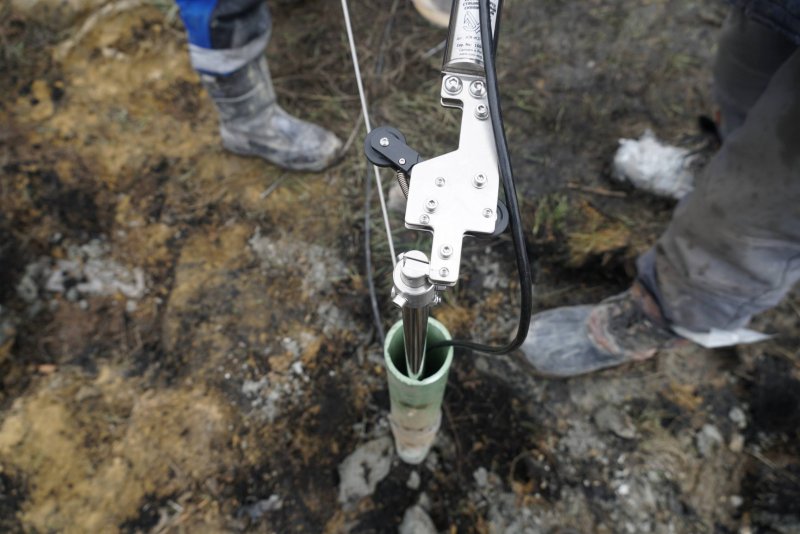 The Bachatskiy coal mine branch (JSC MC Kuzbassrazrezugol, an enterprise of the UMMC raw materials complex) completed the installation of an automated system for monitoring the stability of the mine sides. This digital technology provides safe conditions for mining operations and warns of possible emergencies. The automated monitoring system allows remote monitoring of the stability of the pit walls in real time by obtaining data on the beginning of depth displacements in the near-side rock mass, and long before the appearance of signs deformations on the side surface, as well as data on the dynamics and direction of displacements and the level of water cut in the rocks. The system consists of four observation points, each of which is equipped with two wells 40 meters deep. Eight pairs of motion sensors are installed in them at the same depths: in one, extensometers - they control the vertical displacement of rocks, in the other inclinometers - they control the horizontal displacement. In addition, a water level control sensor is installed at each point. The readings from the sensors are transmitted via the GSM channel to the server at the management of the Kuzbassrazrezugol Management Company, where they are processed in the USM Monitor IT program. “The connection of the sensor readings allows obtaining the full displacement vector, that is, the direction and magnitude of displacement for any period of time. The contractor's specialists have developed such a system in accordance with our terms of reference, - says Elena Sergina, head of the geomechanical control department of MC Kuzbassrazrezugol JSC. “In this configuration, the technology is being used at Russian mining enterprises for the first time.” In addition to the stability of the sides, observation posts also allow monitoring the state of critical structures and communications located on the side of the side. Currently, the company's specialists are receiving the first data, and the software is being finalized.

On this topic
In the criminal code "KRU" has determined the best driver of the most powerful Russian excavator
The TMK Board of Directors recommends accepting the voluntary offer of the TMK subsidiary in
"Kuzbassrazrezugol" has got the second Shadrinskiy locomotive
In the criminal code "KRU" has tested new technology in the field of industrial safety
Kuzbassrazrezugol has built modern treatment facilities
Kuzbassrazrezugol expands its technological transport fleet
Добавить комментарий
Комментарии (0)
News Analytics
German high-speed trains will ride on Ukrainian wheels30-11-2020, 16:26
Diplomatic squabble between Beijing and Canberra crashes coke imports into China30-11-2020, 15:53
The European Commission announced the reduction of industrial emissions by 2%30-11-2020, 15:43
Ukraine does not plan to release shells and cartridges in the coming years -30-11-2020, 15:59
UK investigates human death due to air pollution for the first time in history30-11-2020, 14:37
European Union scrap collectors worried about possible export restrictions18-11-2020, 10:41
Occupational diseases of workers in the extractive industry: types and ways to16-11-2020, 17:49
Eurofer expects recovery in EU steel demand05-11-2020, 09:47
Hot rolled carbon steel demand will continue to grow by 4% pa until 203004-11-2020, 16:14
Platts Steel Trade Review: China Will Decide Asia's Fate30-10-2020, 10:04
Sign in with: