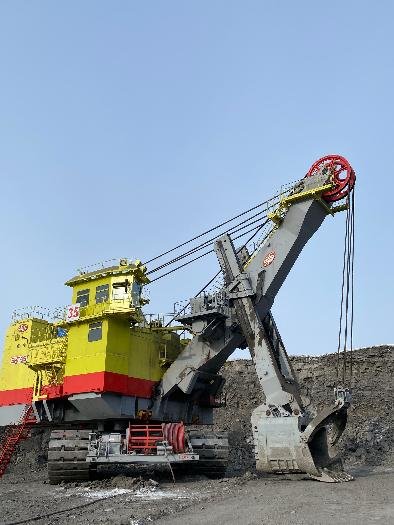 At the Kedrovsky coal mine, JSC "MC" Kuzbassrazrezugol "(an enterprise of the raw materials complex of UMMC) began work EKG-35 №2 - the most powerful in the line of electric mining excavators of domestic heavy engineering.

When creating the second machine series, the designers of PJSC Uralmashzavod (UZTM, part of the UZTM-KARTEX group) took into account the wishes of the specialists of the Kuzbassrazrezugol Management Company, made during the operation of the first issue, and improved the excavator.

“EKG-35 №2 was tested under load and accepted for industrial use. He showed himself well and is now starting his way to his face. - Igor Kirilov, head of the energy-mechanical department of the Kuzbassrazrezugol Management Company, comments. - Features of this machine in its modernization. The designers supplied German swing and lift reducers, strengthened the excavator boom, and improved the track links. These are the major changes. "

EKG-35 - a modernized version of the prototype excavator with a ladle with a capacity of 33 m 3 , which has been operating at another enterprise of the company - the Krasnobrodsky coal mine since spring 2018. The specialists of Uralmashzavod and the Kuzbassrazrezugol Management Company started to create the second excavator two years ago.

“We have done a great job - together we have launched the most powerful Russian-made excavator, which embodies the best engineering solutions, on the market. We received assistance from Kuzbassrazrezugol at all stages of work - from ideas to testing the EKG-35 at the production site, ”says Yan Center, General Director of UZTM-KARTEX Group.

According to him, UMMC is for UZTM-enterprises KARTEX is not just the largest customer of equipment, it is, first of all, a reliable partner that participates in the development of equipment, which allows the domestic machine building to develop, produce reliable modern machines that are not inferior to foreign counterparts.

Today Uralmashzavod conducts shipment of the third EKG-35 to the Kuzbassrazrezugol Management Company, it will operate at the Krasnobrodsky open pit mine.