The jubilee Vienna Music Film Festival has opened in Yekaterinburg 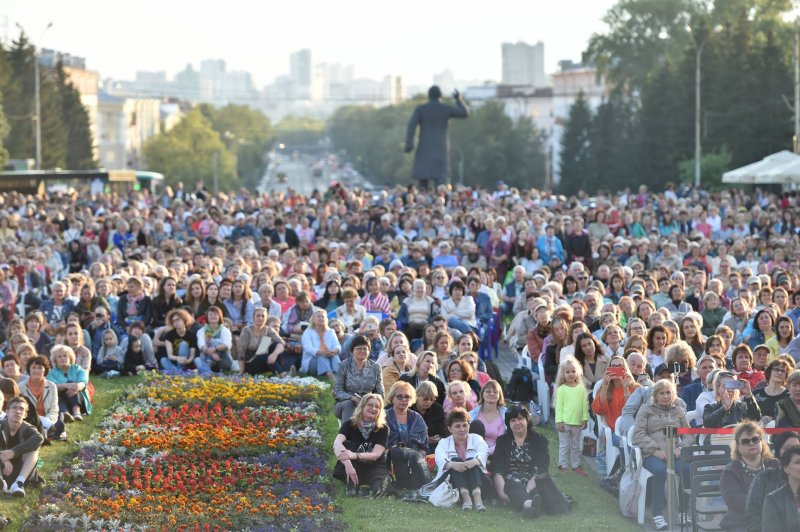 “Interest in the Vienna Festival has grown significantly over the past 10 years. See how many people are around? - Andrei Kozitsyn said at the opening of the Festival. - We started with five thousand spectators who visited the site during the week. And today the festival lasts almost a month, in 2018, for example, it was already attended by 70 thousand people. People come here for various reasons: listen to good music, socialize, breathe fresh air. Everyone will find what he was looking for at the festival. ”

By tradition, a large the musical event began with a live concert. The Vienna quartet “Jaoska Esemble” performed at the opening. The band has created their own style of playing, performing contemporary pieces on classical instruments.

Interestingly, all four members of the collective are musicians in the sixth generation.

In the anniversary year, the festival will last longer than usual - 25 days (from July 3 to July 27). On the big screen, everyone can watch the best music films in Europe for free. Every day at 20 o'clock in front of the main building of UrFU (Mira Street, 19), video recordings of concerts, operas, ballets and Soviet films will be broadcast. Thus, the festival program includes Rudolf Nureyev's ballet Cinderella, Macbeth opera with world-famous soloists Placido Domingo and Anna Netrebko, a performance by the Shanghai Symphony Orchestra, which will perform the stage cantata Carmina Burana by German composer Karl Orff, a concert by Sir Elton John in the Colosseum at Caesars Palace in Las Vegas.

For the third consecutive year, the Vienna Festival will be closed with a DJ parade. On the last evening, the "auditorium" on Kirov Square will turn into an open-air dance floor. This time, musicians from St. Petersburg - DJ Dasha Malygina and Pyotr Prokhorov will take the DJ stand. The full program of the festival is available on the website www.vmff.ru.

Vienna in Yekaterinburg - so far the only such festival in Russia. The history of the Vienna Music Film Festival began in 1991 on the Town Hall Square in the Austrian capital. Later he came to Budapest, Bucharest, New York and Tokyo.

Финансовая аналитика, прогнозы цен на сталь, железную руду, уголь и другие сырьевые товары. More news and analytics on Metallurgprom telegram channel - subscribe to get up-to-date market information and price forecasts faster than others.
Сomments
Добавить комментарий
Комментарии (0)
On this topic
One of the best children's tennis tournaments in the country "UMMC-Open" has started in
NLMK Group and Air Liquide expand cooperation in the production of industrial gases
Air Liquide and Severstal strengthen partnership under a new long-term contract
Air Liquide and Severstal expand cooperation under a new long-term contract at the largest oxygen
Purchase of apartments in new buildings in the South Administrative District of Moscow
The TMK Board of Directors recommends accepting the voluntary offer of the TMK subsidiary in
News Analytics
Chinese steel exports up 28.2% - customs data07-12-2022, 23:43
UK approves construction of new coal mine for the first time in 30 years07-12-2022, 23:29
Analysts predict 5% annual growth in the iron casting market through 203006-12-2022, 12:44
Oman to build a new steel plant worth $3 billion in 3 years06-12-2022, 12:14
Tesla's Shanghai gigafactory set a new record for electric vehicle shipments in05-12-2022, 15:24
Analysts predict 5% annual growth in the iron casting market through 203006-12-2022, 12:44
Commodity prices will fall, metals quotes will rise slightly - Focus Economics28-11-2022, 13:28
Platinum market to face shortage next year - WPIC22-11-2022, 18:25
Global steel demand falls and will fall by 2.3% in 2022: WorldSteel19-10-2022, 23:12
Iron ore prices fall to 11-month low15-10-2022, 10:36
Sign in with: