Dmitry Pumpyansky: Russian-German partnership in the field of digitalization of production is successfully developing 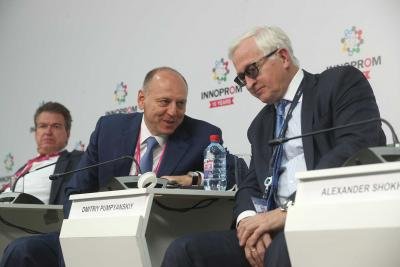 Today, within the framework of the international industrial exhibition INNOPROM-2019, Chairman of the Board of Directors of the Pipe Metallurgical Company (TMK), President of the Sinara Group Dmitry Pumpyansky held an open meeting of the Council for Technical Regulation and Standardization for the Digital Economy of the Committee of the Russian Union of Industrialists and Entrepreneurs (RSPP) for Technical regulation, standardization and conformity assessment and the Eastern Committee of the German Economy. He also took part in the session "German Russian Initiative for Digitalization (GRID): Results and Prospects."

During the meeting, it was noted that cooperation between Russian and German companies in the field digitalization of production is progressively developing. In particular, standards are being developed to create a single digital space, a product classifier is being prepared based on international systems such as the German industry standard Ecl @ ss. At the meetings of the working groups of the Council, the issues of conducting comparative tests of products and harmonization of conformity assessment methods, the use of standardization tools in the implementation of BIM technologies (building information modeling technology) are being worked out. Preparations are underway to create a regulatory framework and standards for high-speed rail transport.

The meeting participants emphasized that there is an active exchange of experience between Russia and Germany. So, last year in Germany, the Russian delegation got acquainted with the most significant projects in the field of "Industry 4.0" and digitalization at the enterprises of Bosch, Daimler and Siemens, and this year, as part of a return visit, the German delegation visited the Seversky Pipe Plant (part of TMK) and the Uralskie Lokomotivy plant (a joint venture between the Sinara Group and Siemens).

“We are very pleased that the GRID initiative is really developing. TMK and Sinara Group have been cooperating with German companies for a long time. Today, within the framework of GRID, our practical interaction can reach a new level, because by laying down modern computer technologies and methods of analysis, we are moving in traditional, basic industries to a completely different level - both in automation, and in product quality, and in predictability for our customers ", - Dmitry Pumpyansky noted.

The Committee for Technical Regulation, Standardization and Conformity Assessment of the Russian Union of Industrialists and Entrepreneurs was founded in 2004. Its activities are focused on involving industry representatives in standardization processes, developing a consolidated point of view of the business community on key issues, bringing this position to the attention of state authorities, and promoting it in government structures. The chairman of the committee is Dmitry Pumpyansky.

INNOPROM is an international industrial exhibition that has been annually held in Yekaterinburg since 2010. The organizers are the Ministry of Industry and Trade of the Russian Federation and the Government of the Sverdlovsk Region. INNOPROM-2019 runs from July 8 to July 11.

Dmitry Pumpyansky: Russian-German partnership in the field of digitalization of production is successfully developing

Share:
Сomments
Добавить комментарий
Комментарии (0)
On this topic
The TMK Board of Directors recommends accepting the voluntary offer of the TMK subsidiary in
Results of the voluntary offer of VTZ JSC in relation to TMK ordinary shares
The NLMK Board has decided to hold an Annual meeting of shareholders on 24 April 2020 in the form
NLMK's Board of Directors decided to hold the Annual Meeting of Shareholders on April 29, 2021 in
TMK continues to successfully supply pipe products for the Sakhalin-2 project
TMK-Kaztrubprom has received a certificate of local origin on the casing with thread connection TMK
News Analytics
Eurofer expects EU steel demand to fall 4.6% in 2022 and 1.6% in 202305-02-2023, 13:31
EU Green Deal should encourage investment in mild steel projects: Eurofer02-02-2023, 16:32
Belarusian steel plant to operate at full capacity from February02-02-2023, 16:56
British Steel considers cutting up to 1,200 jobs at Scunthorpe02-02-2023, 11:50
Electric vehicles will play a key role in US aluminum production growth - Norsk01-02-2023, 12:17
European stainless steel producers ready to raise prices31-01-2023, 16:16
S&P: Russia will continue to dominate the steel export market in the Black05-01-2023, 11:22
Fitch Analysts Predict Big Drop in Global Steel Consumption This Year14-12-2022, 13:59
Analysts predict 5% annual growth in the iron casting market through 203006-12-2022, 12:44
Commodity prices will fall, metals quotes will rise slightly - Focus Economics28-11-2022, 13:28
Sign in with: