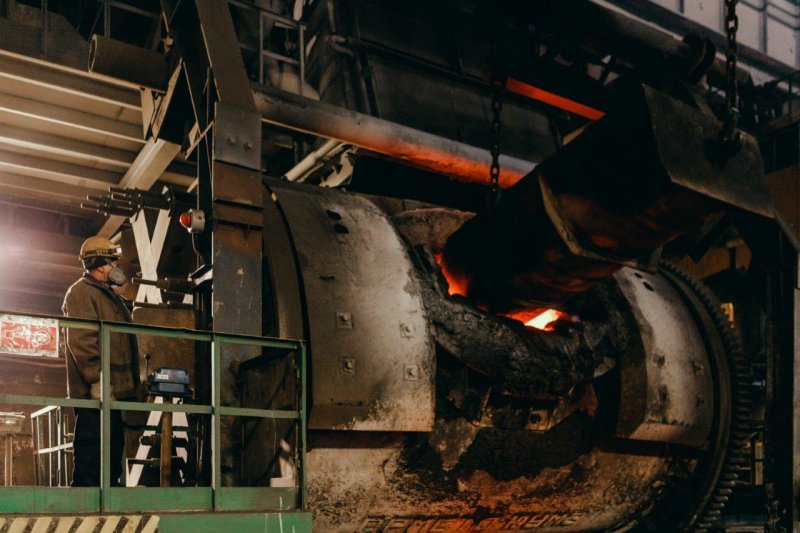 The Polymetal Production Branch of Uralelectromed JSC (an enterprise of the UMMC metallurgical complex) has developed a special cover for the converter, which made it possible to eliminate heat losses and save energy resources. the repair had to be warmed up for two days. To put the unit into operation and to "warm up" it required a significant consumption of gas and air. The developed cover improved the production process, reducing energy consumption, - said Vladislav Borisov, head of the converter department of the branch. The cover is a multi-layer structure and consists of heat-resistant metal and heat-insulating material. It is installed on the neck of the converter and helps to keep heat inside the unit. Previously, three or four burners were required to warm up one converter, but using the lid, two are enough. The metallurgists of the branch intend to use the new device not only during the preparation of the converter for working with melts after repair. In the future, the cover will also be used during prolonged downtime in anticipation of melts, for example, during the annual overhaul of a shaft furnace. This will make it possible to keep the converter in a hot standby using less natural gas and air. The lids for the remaining converters will be manufactured by the employees of the Non-Ferrous Metals Production Branch (Verkh-Neyvinsky settlement, Sverdlovsk Region).

On this topic
A house for bulldozers was equipped at the Polymetals Plant
KCC MMK celebrates its 30th anniversary
Polymetals production modernized the boiler room
The TMK Board of Directors recommends accepting the voluntary offer of the TMK subsidiary in
Locomotive tuning: a huge octopus was painted on a diesel locomotive in Kirovgrad
An apron was installed at the Polymetals Production Plant for cleaning gases
Partner news
Сomments
Добавить комментарий
Комментарии (0)
News Analytics
National Bank of Ukraine predicts economic growth in 2021 by 3.8%29-07-2021, 23:32
"Electrotyazhmash" shipped the stator housing of the hydrogenerator to the29-07-2021, 18:00
Gas price in Europe exceeded $ 500 per thousand cubic meters29-07-2021, 16:43
German concern ThyssenKrupp sells its mining business29-07-2021, 16:22
We are working hard: Ukrzaliznytsia records record indicators of daily load29-07-2021, 11:56
Steel raw materials prices decline in all regional markets27-07-2021, 11:57
On the regional markets of metallurgical products, prices are balancing in a22-07-2021, 16:22
Demand for armaments will ensure a stable growth of armored steel sales by 4%20-07-2021, 10:10
Protectionist Measures Support European Steel Prices Despite Summer Lull19-07-2021, 11:02
Positive price growth is observed in the markets for metallurgical products16-07-2021, 14:12