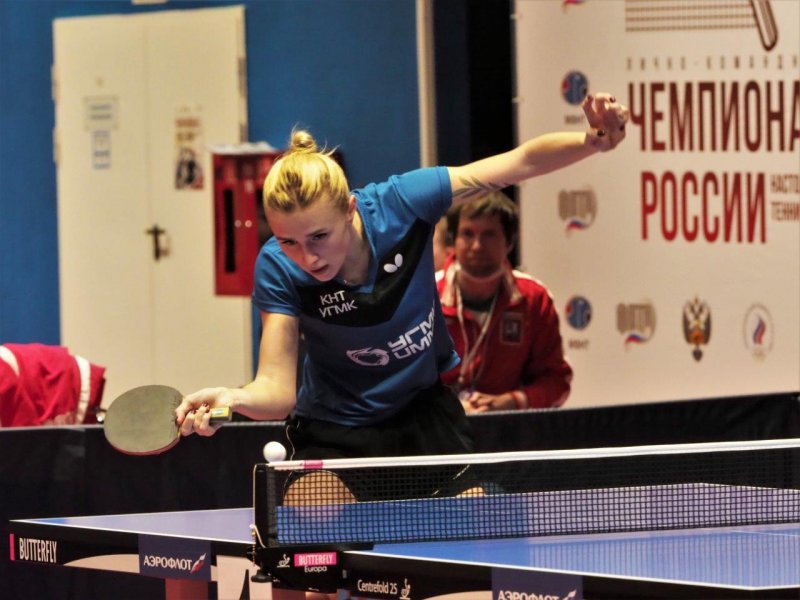 Four medals were won by UMMC tennis players at the Russian Championship, which was held in Moscow from April 13 to 18.

Valeria Kotsyur won gold in the Krasnodar Territory national team in the team tournament, and Olga Vishnyakova became the bronze medalist of the as part of the team of St. Petersburg.

Kotsyur also has a silver mixed medal, she won it together with Vildan Gadiev.

Another medal on the account of Mikhail Paykov, together with Alexei Liventsov, he became second in men's doubles.

In singles, Paikov reached the quarterfinals. He lost to Nikita Artemenko in the semifinals. Danila Travin is another UMMC tennis player who entered the top eight of the country's strongest tennis players. He beat Grigory Vlasov and Denis Ivonin, but he lacked quite a bit in a meeting with experienced Andrei Baibuldin.

“I am very pleased with how Travin performed, of course, he could beat Baibuldin and win a medal, but, most importantly, I see its growth, this result is good prospects for the future. Alexander Tyutryumov was second last year, but here he was not lucky with the net, for reaching the top eight he played with Kirill Skachkov, who is now in excellent shape. The national team of the Sverdlovsk region came in fifth, like last year, and this, I think, is also a good result. Artur Abusev was not in the team, probably somewhere he was a little lacking. But even with this composition, the athletes fought, only with a score of 2: 3 yielding to last year's champion - the St. Petersburg team, ”summed up the coach of the UMMC and the men's team of the Sverdlovsk region Andrei Kulkov.

On this topic
Metalloinvest is the General partner of the international championship Metal Cup 2020
The final of the personal world championship for motorcycling on ice gathered in Shadrinsk of the
Veterans of JSC "Uralelectromed" were awarded commemorative medals in honor of the 75th anniversary
Severstal was a jury member at the International Metal Cup-2019
The best tennis players of Russia U11 have been identified in Verkhnyaya Pyshma
UMMC team won the International Engineering Championship "CASE IN"
Добавить комментарий
Комментарии (0)
News Analytics
Metallurgical Plant Zaporizhstal announced the transfer of data on emissions12-05-2021, 16:46
Interpipe's 5-year Eurobonds for $ 300 mln are assigned a priority unsecured12-05-2021, 16:30
Dnipro Metallurgical Plant exceeded the April production plan by 6.7%12-05-2021, 15:45
The auto industry rushed up: the production of vehicles in Ukraine increased 1612-05-2021, 15:44
The Minister of Energy of Ukraine promised today to close the issue of wage12-05-2021, 14:24
The current state of the market is ideal for the sale of rolled steel - IREPAS04-05-2021, 18:41
Global hydrogen demand to grow 7-fold by 2070 - PwC21-04-2021, 12:31
World Steel Association predicts a good year for metallurgists15-04-2021, 18:19
World Steel Association defines green steel and its variations12-04-2021, 13:14
China unlikely to cut steel capacity in 2021 due to high steel prices07-04-2021, 12:11
Sign in with: