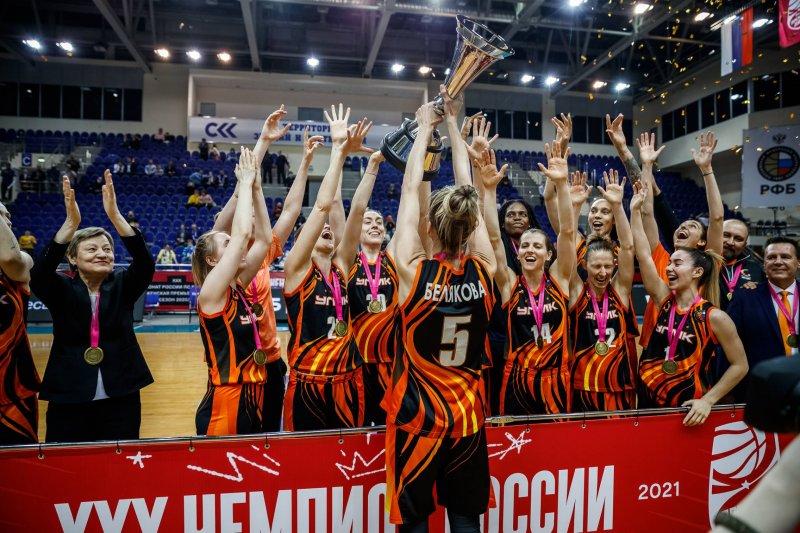 Following the victory in the Euroleague, UMMC, having beaten out in the final play-off series of the national championship Dynamo Kursk, became the champion of Russia for the fifteenth time in its history, and for the thirteenth time in a row.

The first two matches of the final series of the Russian Premier leagues in Yekaterinburg unconditionally remained with the hostesses. And the third final match of the teams in Kursk turned into a long pursuit. During the first three quarters Dynamo managed to win back their lag time after time. However, to change the course of the meeting, and as a result of the whole series, the “white-blue” did not manage to. The outcome of the match was decided in the final ten-minute, which Miguel Mendes' wards held in an organized manner, leaving no chances to their rivals in the third match of the final series of the playoffs of the Russian championship. The series score is 3-0.

UMMC striker Breanna Stewart was recognized as the MVP of the Russian Premier League.

UMMC finished the 2020-2021 season with a champion hat-trick, winning the RBF Super Cup and confirming the status of the reigning champion of Russia and the Euroleague.

Congratulations to all our fans with great victories. All together we have completed the champion's hat-trick, took three titles this season. UMMC won the RBF Super Cup and confirmed the status of the reigning champion of Russia and the Euroleague.

On this topic
UMMC - six-time Euroleague champion
Basketball club UMMC became the first owner of the new Russian Cup
UMMC is a four-time winner of the European Super Cup
Avtomobilist started the new KHL season with victories
BC UMMC - thirteen times champion of Russia
Basketball club UMMC became a five-time Euroleague champion
Partner news
Сomments
Добавить комментарий
Комментарии (0)
News Analytics
Iron ore has become a strategically important raw material for defense -24-07-2021, 11:06
Vietnam overtook Ukraine in the world ranking of steel-producing states24-07-2021, 11:38
Port "Yuzhny" has set a record for the speed of loading pig iron on a ship24-07-2021, 10:10
Dniprovsky Metallurgical Plant switches to alternative heating24-07-2021, 10:53
Krukovka Carriage Works received an advance payment for the construction of 10023-07-2021, 17:49
On the regional markets of metallurgical products, prices are balancing in a22-07-2021, 16:22
Demand for armaments will ensure a stable growth of armored steel sales by 4%20-07-2021, 10:10
Protectionist Measures Support European Steel Prices Despite Summer Lull19-07-2021, 11:02
Positive price growth is observed in the markets for metallurgical products16-07-2021, 14:12
European steel market is in confusion: price growth has slowed down, but no one21-06-2021, 17:40