"We taught the French to work with a probe": researchers of the UMMC museum complex took part in the international military-archaeological expedition "Stalingrad 2021 " 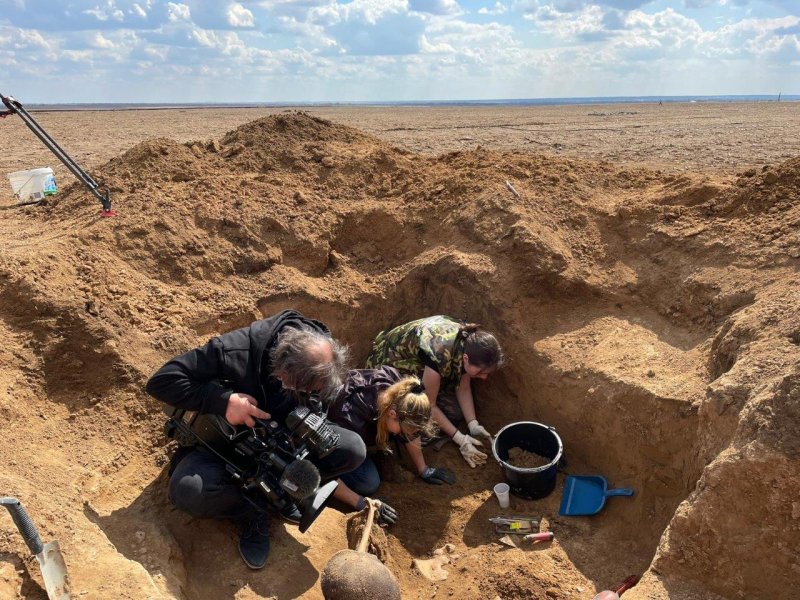 Search operations to find the remains of Soviet soldiers who defended Stalingrad during the Great Patriotic War are being conducted at the initiative of the Foundation for the Development of Russian-French Historical Initiatives. The expedition brought together 50 researchers from Russia and France. Among them are employees of the museum complex of Verkhnyaya Pyshma. They have repeatedly visited archaeological expeditions organized by the Academy of Sciences, but they are taking part in military archaeological excavations for the first time.

“The main thing here is not the search for materials, but the discovery and recovery of the remains of the dead soldiers. Since the beginning of the expedition, more than 30 have already been found. Unfortunately, all of them are still unnamed - we did not find any medallions or any other items that would help to identify the victims, ”says Ivan Silchenko, a member of the expedition, a researcher of the UMMC museum complex .

Searches are being conducted at the site of fierce battles, at the height of Ogurechnaya. In 1942-1943. the elevation allowed the enemy to fire at the railway station, where food and ammunition were brought for the besieged city. The height passed from hand to hand many times. Aviation and tanks were used in this sector. After an unsuccessful assault, the discarded Red Army men dug in literally 150 meters from the top of Ogurechnaya. Most of the dead on both sides were buried in these shooting cells and covered with earth.

Ten anthropologists-archaeologists from various universities are working together with the Russians in the field. Among them is Michel Signoli, who with his team at one time studied the remains of the pilot and writer Antoine de Saint-Exupéry, the author of The Little Prince.

The location of the pits-trenches hidden by time is established with the help of photographs taken during the war years from German reconnaissance aircraft. Archival images are correlated with modern electronic maps, but such a search does not guarantee high accuracy. We have to search a lot, literally, by poking.

“We are looking for the remains of soldiers with a probe. A two-meter metal rod is taken and the ground is pierced square by square with it. Bone sounds special, its own sound when struck against metal, stone or wood. An experienced search engine can determine what-where lies with closed eyes. The French were very surprised by our search method, but they saw its effectiveness. In the Volgograd land, a huge amount of iron - artillery shells, pieces of tanks, cars - the metal detector will give a signal constantly. If the goal is to find the remains of the dead soldiers, the probe is the best tool, "says Ivan Silchenko, a member of the expedition, a researcher of the UMMC museum complex.

The expedition ends on April 30. The discovered remains of the Red Army soldiers will be buried with military honors at the memorial cemetery of Mamayev Kurgan.

The "Stalingrad-2021 " project is implemented by the Foundation for the Development of Russian-French Historical Initiatives jointly with the Ministry of Defense of the Russian Federation, the Ministry of Culture of the Russian Federation, the authorities of the Volgograd region and the National Center for Scientific Research (France) and the National Institute for Preventive Archaeological Research (France).

Финансовая аналитика, прогнозы цен на сталь, железную руду, уголь и другие сырьевые товары. More news and analytics on Metallurgprom telegram channel - subscribe to get up-to-date market information and price forecasts faster than others.
Сomments
Добавить комментарий
Комментарии (0)
On this topic
One of the best children's tennis tournaments in the country "UMMC-Open" has started in
NLMK Board of Directors has appointed the Annual Shareholders Meeting for April 19, 2019
NLMK Group's Corporate University became a member of the EFMD international community
Notification of changes in the share capital structure
Electric cars in Dnipro
Dmitry Pumpyansky: Russian-German partnership in the field of digitalization of production is
News Analytics
China's iron ore output to rise in 2023 as new projects are launched30-11-2022, 18:10
"Centravis" agreed to supply a new batch of seamless pipes to a30-11-2022, 16:51
Metinvest enterprises in Ukraine resumed work after massive shelling of29-11-2022, 11:59
The European Council added the violation of restrictive measures (sanctions) to28-11-2022, 14:22
The abolition of export duty in India may reduce the price of Turkish steel28-11-2022, 14:07
Commodity prices will fall, metals quotes will rise slightly - Focus Economics28-11-2022, 13:28
Platinum market to face shortage next year - WPIC22-11-2022, 18:25
Global steel demand falls and will fall by 2.3% in 2022: WorldSteel19-10-2022, 23:12
Iron ore prices fall to 11-month low15-10-2022, 10:36
China production cuts in winter will give limited boost to steel markets -15-09-2022, 10:09
Sign in with: