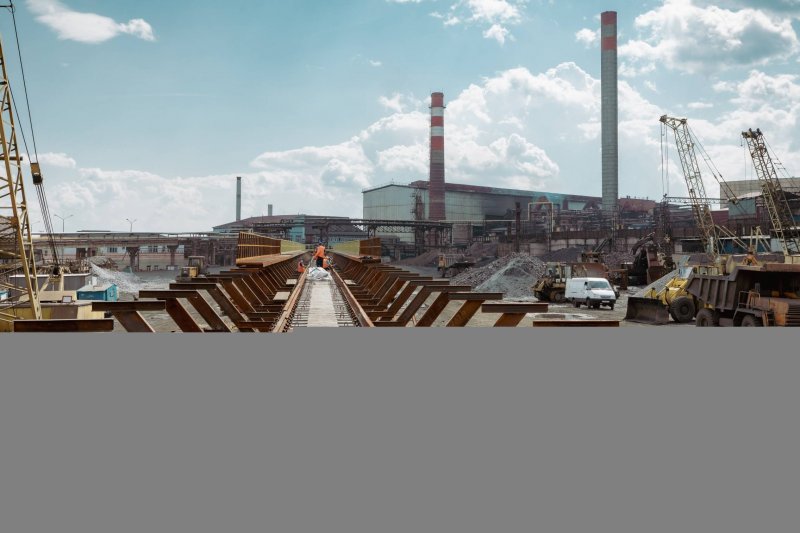 The second stage of railway track repair work has been completed in the Polymetal Production branch of Uralelectromed JSC (an enterprise of the UMMC metallurgical complex). A total of 82 running meters were repaired. The new track is built of 34 reinforced sleeper blocks (each weighing 7 tons), to which rails are attached. The block is covered with metal sheet panels on the outside, which makes it easy to clean the track surface from the remnants of raw materials - concentrates, quartzites, fluxes.

For safe work during unloading of raw materials, special transition platforms for personnel have been mounted on the repaired section of the track.

The first stage of the renovation was carried out in 2020. Then the sleeper block was used for the first time. The operation of the repaired 100-meter section during the year showed good results. The program for the repair of railway unloading fronts is designed until 2025. Step by step, within four years, using the proven technology, the railway workers plan to carry out repairs on two more transport arteries of the branch.

On this topic
A robotic destroyer was used to clean the trolleys from raw materials at the Polymetal Plant
The Prime Minister of the Russian Federation gave the command to launch a new railway fleet of
The overhaul of the shaft furnace has been completed at the Polymetals Plant
Polymetals production modernized the boiler room
Polymetal production has improved the railway fleet
Uralelectromed completed the second stage of reconstruction of the raw material warehouse
Partner news
Сomments
Добавить комментарий
Комментарии (0)
News Analytics
National Bank of Ukraine predicts economic growth in 2021 by 3.8%29-07-2021, 23:32
"Electrotyazhmash" shipped the stator housing of the hydrogenerator to the29-07-2021, 18:00
Gas price in Europe exceeded $ 500 per thousand cubic meters29-07-2021, 16:43
German concern ThyssenKrupp sells its mining business29-07-2021, 16:22
We are working hard: Ukrzaliznytsia records record indicators of daily load29-07-2021, 11:56
Steel raw materials prices decline in all regional markets27-07-2021, 11:57
On the regional markets of metallurgical products, prices are balancing in a22-07-2021, 16:22
Demand for armaments will ensure a stable growth of armored steel sales by 4%20-07-2021, 10:10
Protectionist Measures Support European Steel Prices Despite Summer Lull19-07-2021, 11:02
Positive price growth is observed in the markets for metallurgical products16-07-2021, 14:12