Previously, the main cause of hunger on our planet was climate change, but now they have faded into the background. 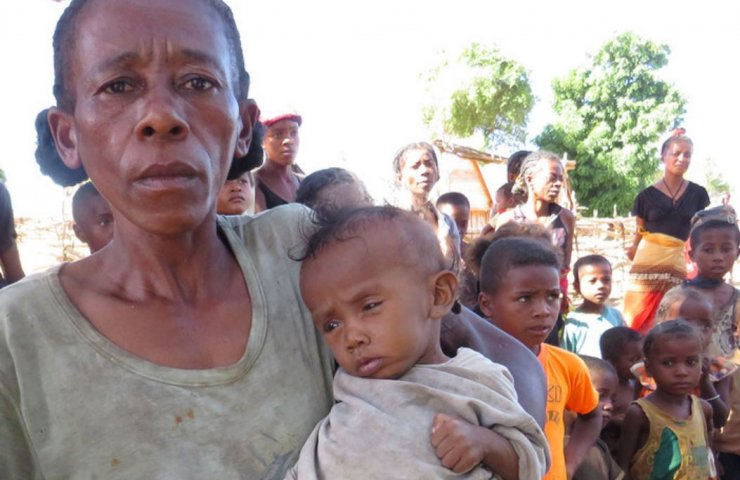 Conflicts and economic shocks associated with the pandemic have led to severe food shortages in several countries around the world - the worst of the assumed scenarios is being realized. Last year, an additional 20 million people were in a crisis situation. 34 million inhabitants of the planet are already facing death by starvation. The UN calls for urgent action.

These are the conclusions of a new report prepared by experts from the Global Food Crisis Network - an international alliance that includes the UN, the European Union, as well as a number of government and non-governmental organizations.

The report says that last year, at least 155 million people in 55 countries around the world experienced severe food shortages - an increase of 20 million from a year earlier. This figure has increased sharply, including due to the economic shocks associated with the pandemic. Overall, the alarming trend - an increase in the number of hungry and malnourished - has continued since 2017, when the first report was released.

The UN has an internationally recognized scale that characterizes the degree of the food crisis. Last year, 133 thousand people found themselves in "catastrophic" conditions - this is the official name for the fifth and final stage of food shortages. These people live in Burkina Faso, South Sudan and Yemen. A “catastrophic level” of hunger means that in the 21st century, somewhere near us, people will starve to death in droves.

28 million people in 38 countries of the world are on the verge of a "catastrophe" - in a crisis of the fourth degree. They also need urgent help. In the same countries, part of the population is facing an acute food shortage, but their situation is assessed as a crisis of the third degree, and in five years the number of people in this category increased from 94 to 147 million.

And from the chilling statistics: in the 55 countries in question, 90 million children under the age of five have developmental delays associated with malnutrition. Most of the people suffering from hunger and malnutrition live in Africa. However, the list of countries where the food crisis is unfolding also includes Yemen, Afghanistan, Syria and Haiti.

Last year, like all previous years, conflict was the main cause of food shortages: wars and armed clashes left an additional 23 million people impoverished. The second leading cause in the past year was the economic downturn, mainly related to the pandemic and imposed restrictions. Previously, the second place in this list was occupied by the effects of climate change, but now the weather factor has been pushed out to third place.

“One year after the announcement of the COVID-19 pandemic, our future still looks bleak,” says a joint statement by the European Union, the Food and Agriculture Organization (FAO) and the World Food Program (WFP) and the United States - key players in the Global Network to Fight with hunger. The authors of the document warn that conflicts, pandemic-related restrictions and extreme weather events will continue to have a negative impact on people's lives and exacerbate the crisis.

The pandemic has only highlighted pre-existing problems in global food systems and demonstrated the importance of tackling inequalities and moving towards sustainable farming practices. Experts are convinced that only by carefully treating the resources of the planet, it is possible to feed billions of its inhabitants. These issues will be discussed at the highest level in the coming months during various conferences and summits.

The UN Secretary General calls on the entire international community to pay attention to the crisis and warns that the fight against hunger is not only a moral duty, but a guarantee of stability and peace for all mankind.

Финансовая аналитика, прогнозы цен на сталь, железную руду, уголь и другие сырьевые товары. More news and analytics on Metallurgprom telegram channel - subscribe to get up-to-date market information and price forecasts faster than others.
Сomments
Add a comment
Сomments (0)
On this topic
FAO: 60 percent of waste in Ukrainian landfills is food
Post-pandemic global economy: UN calls for global consolidation
WHO /ILO report: Approximately 2 million people die each year from work-related illness and injury
Coronavirus pandemic has not stopped global warming - UN
The pandemic did not help: the amount of greenhouse gases in the Earth's atmosphere is increasing
UN Secretary-General on the situation in the world: wind of hope has been replaced by wind of
Recommended:
The state will not support the export of metals from Russia - Ministry of Industry and Trade of the Russian Federation
JSPL steel mill manager stoned to death
Ukraine delivered 86,000 tons of iron ore to Turkey in September - TUIK
News Analytics
China's iron ore output to rise in 2023 as new projects are launched30-11-2022, 18:10
"Centravis" agreed to supply a new batch of seamless pipes to a30-11-2022, 16:51
Metinvest enterprises in Ukraine resumed work after massive shelling of29-11-2022, 11:59
The European Council added the violation of restrictive measures (sanctions) to28-11-2022, 14:22
The abolition of export duty in India may reduce the price of Turkish steel28-11-2022, 14:07
Commodity prices will fall, metals quotes will rise slightly - Focus Economics28-11-2022, 13:28
Platinum market to face shortage next year - WPIC22-11-2022, 18:25
Global steel demand falls and will fall by 2.3% in 2022: WorldSteel19-10-2022, 23:12
Iron ore prices fall to 11-month low15-10-2022, 10:36
China production cuts in winter will give limited boost to steel markets -15-09-2022, 10:09
Sign in with: