UN Secretary General: humanity has a chance to cope with global warming

UN Secretary-General disappointed with the results for the climate Conference, which ended in Madrid. According to antónio Guterres, the participants missed the opportunity to take decisive action necessary to deal with the climate crisis. 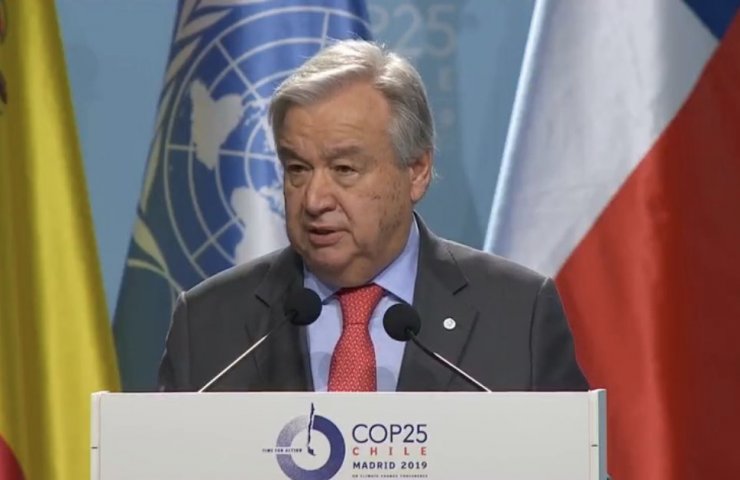 Despite the fact that the negotiations in Madrid lasted for almost two days longer than planned – both day and night, the participants of the Conference on climate change ultimately adopted the document does not contain concrete measures and commitments.

"the International community missed an important opportunity to demonstrate a more serious willingness to take action in curbing climate change, adaptation to its effects and financial support to [developing] countries," said the UN chief, antónio Guterres, at the conclusion of the Conference of the parties of the UN Convention on climate change.

I am disappointed with the results of #COP25.

The international community lost an important opportunity to show increased ambition on mitigation, adaptation & finance to tackle the climate crisis.

Expected that the countries will take "higher" obligations, primarily for the reduction of greenhouse gases, in such quantities that would fulfill the purpose of the Paris agreement to keep the rise in average global temperature within 1.5 degrees Celsius. But this did not happen.

the European Commission recently adopted a "green agreement", providing for public investment in reducing greenhouse gas emissions in the amount of 100 billion euros, expressed frustration and deep concern about the results of the climate summit.

"it is disappointing that after many years of hard work, especially during the last two weeks, we are unable to agree in respect of article 6, providing incentives to reduce emissions now and in the future without compromising environmental integrity," said the European Commission.

UN Secretary-General stated that extremely dissatisfied with the results of the Madrid meeting, but urged not to give up.

"We must not give up, and I'm not going to back down. More than ever I am determined to ensure that in 2020, all countries committed themselves to take action, which, as scientists tell us, is necessary to by 2050 to achieve "carbon neutrality" and to avoid raising the temperature more than 1.5 degrees," he promised Guterres.

Финансовая аналитика, прогнозы цен на сталь, железную руду, уголь и другие сырьевые товары. More news and analytics on Metallurgprom telegram channel - subscribe to get up-to-date market information and price forecasts faster than others.
Сomments
Add a comment
Сomments (0)
On this topic
UN Secretary General urged to declare a state of emergency in the field of climate and proposed six
One of the largest banks in Sweden to be fined for payments to the Crimea
Elon Musk contracted coronavirus, but doubts the reliability of the tests
How Tesla became the world's most valuable automaker
EU leaders approve plan to cut greenhouse gas emissions by 55% by 2030
Iran is satisfied with the reaction of the world community to 60% enrichment of uranium
Recommended:
ArcelorMittal invests $25 million in nuclear technology development
Australia and the UK aim to catch up and overtake China in the battery metal sector
India plans measures to stimulate domestic steel exports
News Analytics
China's iron ore output to rise in 2023 as new projects are launched30-11-2022, 18:10
"Centravis" agreed to supply a new batch of seamless pipes to a30-11-2022, 16:51
Metinvest enterprises in Ukraine resumed work after massive shelling of29-11-2022, 11:59
The European Council added the violation of restrictive measures (sanctions) to28-11-2022, 14:22
The abolition of export duty in India may reduce the price of Turkish steel28-11-2022, 14:07
Commodity prices will fall, metals quotes will rise slightly - Focus Economics28-11-2022, 13:28
Platinum market to face shortage next year - WPIC22-11-2022, 18:25
Global steel demand falls and will fall by 2.3% in 2022: WorldSteel19-10-2022, 23:12
Iron ore prices fall to 11-month low15-10-2022, 10:36
China production cuts in winter will give limited boost to steel markets -15-09-2022, 10:09
Sign in with: