An inclinometer will help to control the verticality of buildings, structures of other critical facilities. 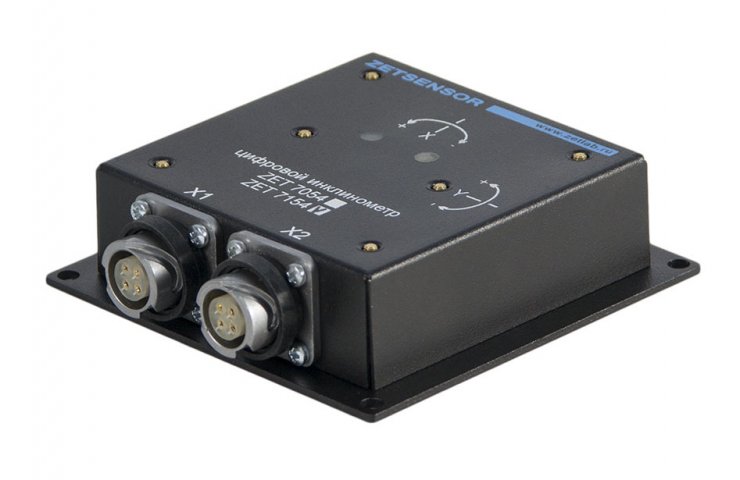 Measuring devices inclinometers ZET 7054 refers to digital smart devices. Used when measuring the deviation from the vertical of buildings or other structures.

During control measurements of verticality, a measurement is performed in two coordinate axes, the obtained data is transmitted to an external receiver by channels of physical interfaces.

All components are enclosed in a metal shell filled with compound.

Connectors and LED indicators are built into the tiltmeter body. The direction of the axes (x, y) is indicated by the marking on the body. There are also holes in the corners of the case for fixing the device to the vertical planes of the object.

The primary converter consists of two parts - a static and a movable weight on hangers. When the device axis deviates from the vertical, the capacitor plate attached to the weight is displaced relative to the plate of the other part of the capacitor. Since the charge on the plates remains unchanged, the voltage changes when the plates shift. The received signal is converted into a digital code by the sensor, and the signals are transmitted to the DSP processing device. The device converts the received code into an angular value, performs digital filtering of pulses, after which the interface converter transmits the obtained values ​​via the RS-485 interface.

The inclinometer memory contains data on the sensor parameters, which makes it possible to take into account its conversion coefficient and other characteristics. Such a system makes it possible not to repeat the procedure for setting up the measurement channels. Usually tiltmeters continuously monitor the quality of measurements, synchronization and metrological control, which is organized by applying an electronic signal. Simulation of changes in angular deviation and evaluation of the obtained value from the reference value allow you to control the quality of measurements.

If it is necessary to carry out control measurements of the verticality of buildings, structures, masts, towers, an inclinometer will be the best device for measurements. The digital device reduces the error, increases the measurement accuracy, eliminates the possibility of error.

Recommended:
US State Department failed to propose new sanctions against Nord Stream 2 - Bloomberg
ArcelorMittal Kryvyi Rih has updated its fleet of special equipment
Raspadskaya beneficiation plant shipped 100 million tonnes of coal concentrate
On this topic
Should you buy an electronic lock for your front door?
Frequency converters for three-phase and single-phase electric motors
What are strain gauges?
Applications of bag filters
Ultrasonic gas flow sensors
Features block fire hydrants with electric heating
Add a comment
Сomments (0)
News Analytics
ArcelorMittal has raised prices for galvanizing for the European market to 90026-02-2021, 13:23
The European Commission initiated a new investigation on steel imports to26-02-2021, 13:22
A rally of workers of the stopped shipyard was held in Mariupol26-02-2021, 12:34
State Energy Efficiency together with UNECE and stakeholders discussed the26-02-2021, 11:36
Corum Group presented the company's development strategy until 203026-02-2021, 10:04
Increase in prices is forecasted in the markets of steel raw materials -26-02-2021, 09:25
Troy ounce of gold will drop $ 500 in two years - Fitch25-02-2021, 18:29
Global iron ore production growth to outstrip cumulative production in India23-02-2021, 10:22
Fitch Ratings Warns of “Shocking Impact” on Fossil Fuel Exporters18-02-2021, 14:44
Raw material prices rise by about 10.5% in January 2021 - Deutsche Industriebank12-02-2021, 10:48
Sign in with: