According to S&P Global, the profit margin on sales of hot-rolled steel in the Chinese domestic market fell from minus $37 per ton to minus $102 per ton. 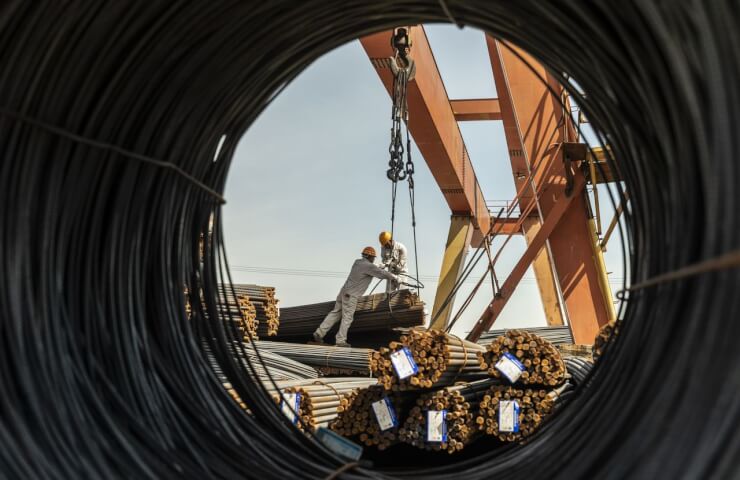 China's pig iron and crude steel production is likely to fall further in mid- to late July as more steel mills in China were forced to cut production due to mounting losses.

Steel cuts are expected to support domestic steel prices, which have fallen sharply since May due to weak demand and oversupply. However, any price pullback could be quite modest as steel mills start ramping up steel production again once profit margins recover, industry sources told S&P Global Commodity Insights.

According to S&P Global calculations based on data from market sources, due to the recently scheduled blast furnace maintenance activities, which are mainly carried out in eastern and northern China, daily pig iron production is likely to decrease between 15 and 31 July at least 40,000 tons per day.

According to the China Metallurgical Association CISA, daily pig iron production in China from July 1 to July 10 fell by 3.3% compared to June to 2.478 million tons. This means that daily production until the end of July can be further reduced by a maximum of 2.438 million tons. However, this level will still be higher than the 2.35 million tons recorded in July 2021.

Финансовая аналитика, прогнозы цен на сталь, железную руду, уголь и другие сырьевые товары. More news and analytics on Metallurgprom telegram channel - subscribe to get up-to-date market information and price forecasts faster than others.
Сomments
Add a comment
Сomments (0)
On this topic
China steel inventories hit 13-month high amid COVID-19 outbreak
Los Angeles Times: a Perfect storm in the American market of steel
High iron ore shortage could halt metallurgy's green transition
Steel production in China declines in July, but this does not affect the large supply surplus
Protectionism fails to balance the steel market
Platts: 35% of the steel mills in China have cut output due to problems with the supply of raw
Recommended:
Zaporizhstal has reduced the output of metal products by 56% since the beginning of the year
Coal production in China increased by 11% in January-August
The European Commission has approved 5.2 billion euros of state support for another massive hydrogen project
News Analytics
Tata Steel merger plan to secure long-term profits03-10-2022, 10:46
US hydrogen prices to drop to zero dollars per kg in 5 to 6 years: Platts02-10-2022, 21:53
The production of passenger cars in Russia decreased by 2.8 times in eight29-09-2022, 11:19
Donetsk and Torez electrotechnical plants will start producing electrical29-09-2022, 11:37
Ukrainian coking plants reduced gross coke production by 55.2%29-09-2022, 11:28
China production cuts in winter will give limited boost to steel markets -15-09-2022, 10:09
Steel prices may rise as manufacturers stop production11-09-2022, 14:06
IREPAS: The global long products market is in a "dramatic situation"10-09-2022, 20:49
Steel prices are unlikely to rise significantly in the near future - analysts02-09-2022, 22:58
Steel prices may move up on new data from China31-08-2022, 12:19
Sign in with: