Los Angeles Times: a Perfect storm in the American market of steel

the Tariffs on imported steel introduced by the authorities trump last year, played with American steel market is a cruel joke, becoming not what was expected. 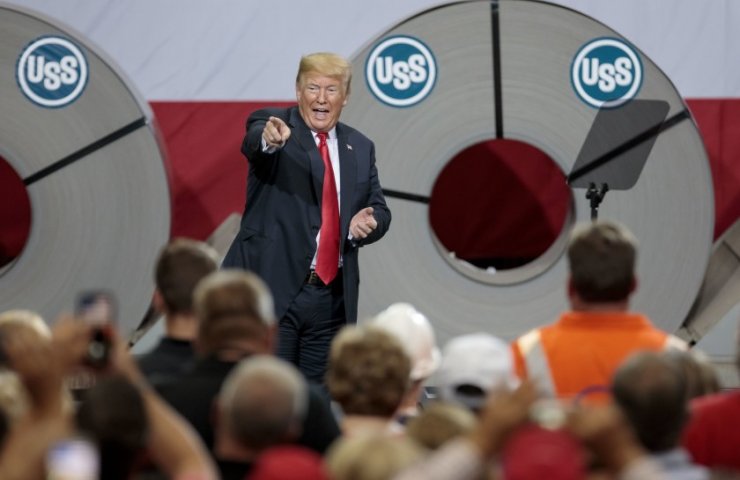 When President trump has imposed a 25 percent tariff on foreign steel in March 2018, the U.S. panicked shoppers rushed to place new orders for fear of supply disruptions that raised the price in the U.S. market.

This was the signal for the local steel producers to reopen their halted during the crisis of the company and to announce plans to build new facilities.

the United States Steel Corporation then instantly launched a couple of blast furnaces in Granite city, Illinois, standing before a few years of idling, and trump took the opportunity to speak at the factory with a lively speech about the revival of the industry.

However, just a year later, it became clear that supply exceeds demand and the world market refuses American steel because of its high cost, and amid a General slowdown in economic growth caused by trade wars of the US President.

reference Prices for steel have fallen much below their level before the entry into force of the tariffs, and now amount to roughly half its peak in July 2018.

And while this steel plant in Granite city is still working, based in Pittsburgh, United States Steel began to lay off dozens of workers from the other two old blast furnaces near Detroit and East Chicago, Indiana. Several other steelmakers closed plants, idling or cutting equipment in Louisiana, Kentucky, West Virginia and Pennsylvania. Total employment for the steel industry was almost unchanged from two years ago.

This is a serious political problem for trump, who took office in 2016, promising to help revive American manufacturing and its workers.

the root of the problem with steel is a perfect storm that the leaders of American industry, pushed by politics trump have created for themselves, their companies and their employees.

Inspired by the tariffs, the rhetoric of the President in favor of business and tax cuts for which the money was invested in the corporate Treasury, the steel companies began to spend money, increasing its production capacity in the domestic market, which this is not needed. Historically low interest rates have added to the enthusiasm of the steel industry to invest in new and improved plant and equipment.

At the same time, the tendency to trump periodically renewed trade war contributed to the overall slowdown in the global economy. Production in the United States, which along with construction sector is a major consumer of American steel, is currently in a recession.

"It's just shocking that we are growing," said Timna Tanners, an analyst with steel industry BofA Merrill Lynch Global Research. The drop in demand and increase productivity - a "poisonous combination".

According to analysts, more than 50 declared restarts, expansions and new projects - most of which are already underway will increase the production capacity of steel in the country by about 20% in the next two to three years.

administration Officials trump and American iron and steel Institute, which represents the interests of steel producers argue that the tariffs were worked by limiting imports and increasing the share of manufacturing in the United States.

It is true that the import of steel declined as a proportion of the total domestic steel market, with approximately 30% of all purchases in the U.S. up to 20%. But even if the imports will fall to zero in the United States will still have more production capacity than necessary, based on all the new projects that are in progress.

moreover, when the bulk of new capacity will be launched later next year, said Tanners, steel demand could further slow. Automakers are increasingly using more aluminum and less steel, and non-residential construction have already reached the maximum.

This means that steel prices could fall even lower. According to Timothy Triplett, senior editor Steel Market Update, prices for hot rolled coils has already fallen from over $ 900 per ton in July last year to about $ 470 today.

When trump introduced the duty against all the world except neighboring Mexico and Canada, he justified his actions by saying that steel imports threatens us national security, although few agreed with this opinion, even his own Ministry of defense of trump. Moreover, the move has insulted the major countries-exporters of steel, especially its allies, including the European Union, which responded with tariffs on imports from the United States.

it is Noteworthy that the tariffs trump the steel does not solve the fundamental problem: a global glut caused by overproduction in China, which accounts for half of the world supply. This is due to the fact that even before the actions of trump, the proportion of China's steel exports to the USA amounted to only about 2%, as Washington previously was charged with China's draconian anti-dumping and antisubsidies rates.

Rates trump also did not take into account the inefficiency of the industry in the USA. Instead, a temporary lift just delayed the closure of older, more expensive integrated businesses that can't compete with technologically advanced mini-mills and electric arc furnaces.

Plant AK Steel Corp. in Ashland, Kentucky, is an example. A company based in Ohio, first announced the plant shutdown in October 2015, but just last month, a steelworker was informed by government officials of Kentucky, by the end of the year, he permanently shut down work in Ashland, eliminating 260 jobs.

Representative AK Steel said that the tariffs helped, but it wasn't enough to save the plant from "global excess steel and unfair trade practices".

With the fall in steel prices, more inefficient plants could be closed, as the industry moves to a cheaper or enterprises not associated with the Union. Employment agreement, long-term contracts for the sale and the desire of the metallurgical companies to maintain performance old capacity will impede restructuring. And the company is unlikely to go away from extensions and new projects.

"All of this together paints a picture of how these rates are detrimental to long-term competitiveness of American steel," said Kristin McDaniel, senior research fellow, Mercatus Center at George Mason University. "It hurts, but we must allow the market to work."

moreover, the tariffs backfired, they also angered many users of steel and small players in the industry, who accuse the administration of the tramp that she is playing fast and loose with big business.

Before becoming a major reseller trump, Robert Leitheiser represented U.S. steel producers in the private practice of law. Nucor helped Fund a documentary film critical of China made by Peter Navarro, a sales REP trump. And Dan Dimicco, which was part of a team to transition a tramp, was once the CEO of Nucor.

NLMK Steel mill which employs 1,200 workers at plants in Sharon, Pennsylvania and Gary, Indiana, buys slabs from its parent company NLMK in Russia and turns them into finished steel coils, which are sold for construction and other purposes. industry.

Bob Miller, President of NLMK group's operations in the United States, said that the real market of steel slabs does not exist. Plants use slabs, which they do mainly for their own needs, for the production of finished rolled steel for sale to end users, which means that NLMK can't get enough domestic steel, despite the fact that United States Steel and others say that they can supply the market.

last year, according to Miller, NLMK has paid $ 170 million in tariffs on imported slabs and expenses, which led to shrinking margins and forced the company to begin layoffs and cut hours for their employees.

Финансовая аналитика, прогнозы цен на сталь, железную руду, уголь и другие сырьевые товары. More news and analytics on Metallurgprom telegram channel - subscribe to get up-to-date market information and price forecasts faster than others.
Сomments
Add a comment
Сomments (0)
On this topic
United States Steel Corporation pays a symbolic dividend of 1 cent per 1 share
Asia faces an influx of Chinese steel due to Washington's actions
Prospects for the development of the economy and steel market in the EU in 2019-2020
Steel trade war costs US companies $ 11.5 billion a year
How the reform of the electricity market in Ukraine can lead to a collapse and what to do about it
US Steel announces suspension of steel production at two US plants
Recommended:
India launches carbon trading market
Serbian steel plant shuts down blast furnace due to high gas prices
Europe's largest pure hydrogen plant to be built in the Netherlands
News Analytics
Российским металлургам потребуется более 10 лет для импортозамещения ключевого09-08-2022, 07:23
China reduced steel exports in July by one million tons or 12%08-08-2022, 17:41
World steel prices have moved from a protracted fall to growth08-08-2022, 16:27
Ferrexpo's net profit in the first half of the year decreased by 88%03-08-2022, 10:20
Ukrainian gas transportation system allowed to pump biomethane03-08-2022, 10:18
The US market may begin a collapse in prices for thick sheet14-07-2022, 09:39
High iron ore shortage could halt metallurgy's green transition28-06-2022, 14:02
Price volatility hits global steel market27-06-2022, 19:28
Recovery in China could be key to rising global steel prices - MEPS24-06-2022, 14:00
Conflict in Ukraine spurs Europe's drive for clean energy03-06-2022, 12:14
Sign in with: