Nippon Steel has been investing in new electric steel smelters since 2019, aiming to convert all operating blast furnaces to electricity and hydrogen. 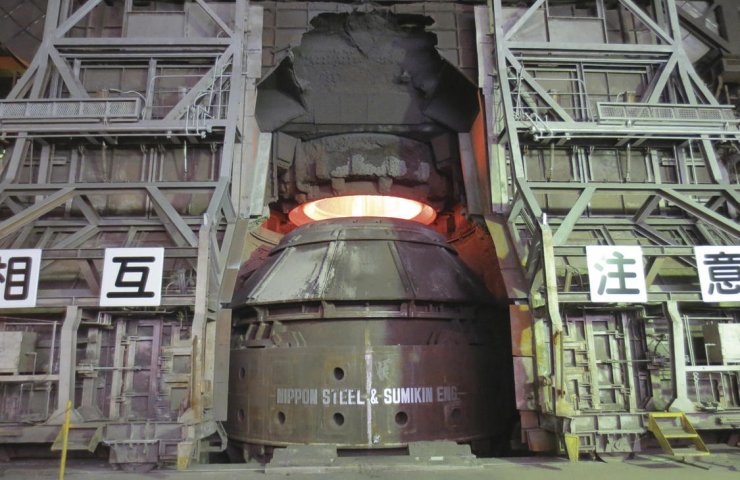 Japan's largest steel mill Nippon Steel has begun development of a giant electric arc furnace (EAF) and plans to expand the use of hydrogen in steelmaking in the coming years as part of decarbonization efforts to achieve zero CO 2 emissions by 2050 .

Nippon Steel has unveiled an action plan to decarburize steelmaking operations through various technological innovations, including carbon capture, utilization and storage. By 2030, the company plans to reduce its carbon dioxide emissions (CO 2 ) by 30% compared to 2013 levels.

Nippon Steel is considering combining hydrogen scrap and direct reduced iron as feedstock for a giant EAF that will run on green electricity to reduce 2 CO emissions.

The steel industry is the largest emitter of CO 2 , accounting for about 14% of Japan's total emissions. Most of the CO 2 emissions are from blast furnace steelmaking. Nippon Steel is consolidating its steel production in the domestic market, aiming to reduce its production capacity to 40 million tons per year by April 2025 by 10 blast furnaces.

Nippon Steel also plans to accelerate the development of a direct hydrogen reduction steelmaking process for commercialization by 2050. Major global steelmakers, including ArcelorMittal, are also working to develop the hydrogen process, but high costs undermine such efforts, at least in the near future.

Nippon Steel and rival steel mills JFE Steel and Kobe Steel have partnered since 2008 to develop technology to reduce CO 2 emissions by reducing hydrogen content in blast furnaces. They aim to commercialize the technology by 2030, while working to further accelerate the rate of hydrogen reduction in blast furnaces through 2050.

Сomments
Add a comment
Сomments (0)
Partner news
Recommended:
In Russia, export duties on the export of scrap metal may be increased to 100 euros per ton
Steel and iron ore market collapsed in China
United Mining and Chemical Company will be checked by environmentalists
On this topic
Tokyo Steel reports increased activity in the Asian steel market
USA slapped sanctions on steel industry of Iran
Korean auto makers will switch to hydrogen engines with help from Chinese steelmakers
Tokyo Steel for the first six months reduces the price of steel because of the pandemic
Tokyo Steel sixth time since the beginning of the month increased the procurement prices for scrap
The Eurasian Commission has announced the final amount of duties on Ukrainian zinc
News Analytics
Elon Musk urges people to leave Binance, Coinbase and other cryptocurrency28-11-2021, 13:19
Ukraine's population is declining at one of the fastest growing rates in the28-11-2021, 13:09
Spain refuses to build uranium plant28-11-2021, 13:19
Elon Musk turned out to be from subsidies for Tesla plant in Germany27-11-2021, 11:33
State Service of Geology and Mineral Resources of Ukraine has updated data for27-11-2021, 11:40
What unites Ilona Mask and other richest people in the world31-10-2021, 12:28
Moldavian Gordian knot - big politics28-10-2021, 11:03
Elon Musk's equity capital is approaching the $ 300 billion mark27-10-2021, 13:26
Hopes are dying to end the world's dependence on coal25-10-2021, 16:54
Will the rise in steel prices limit metallurgical production?25-10-2021, 11:44
Sign in with: